Rebels in the Archives: Stories of Sexism, Sisterhood and Struggle

On 8 March 2017, to celebrate International Women’s Day, the British Library will host a panel conversation on the power and potential of archiving feminist movements. Rebels in the Archives is an evening dedicated to stories of sexism, sisterhood and struggle.

Our speakers include Jill Liddington, Abi Morgan, Heidi Safia Mirza and Deborah Withers. Margaretta Jolly, project director of Sisterhood and After: An Oral History of the Women’s Liberation Movement, will chair this panel of influential feminists as they debate questions of politics, representation and preservation.

Our panel will be sharing stories of the rebels and rebellion that inspire them. Discussing their own engagement (as historians, screenwriters, researchers and curators) with archives of activism. As well as debating the ways in which collecting, curating and communicating activism can be a radical practice. 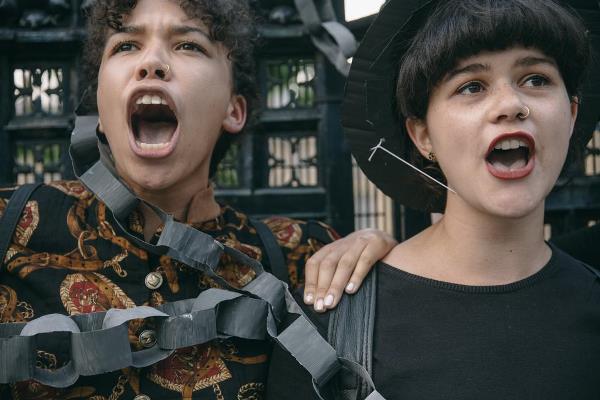 Photograph copyright of Theo McInnes and reproduced here with their kind permission.

Jill Liddington is a writer, historian and Honorary Research Fellow at the University of Leeds. She has researched and written on votes for women since the 1970s, when she first visited the Fawcett Library (now Women’s Library). Her latest book Vanishing for the Vote: Suffrage, Citizenship and The Battle for the Census, tells how suffragette organizations urged women, all still voteless, to boycott the census on 2 April 1911.

Abi Morgan is a BAFTA and Emmy Award winning writer and producer. Abi is the screenwriter of Suffragette, the first ever mainstream film about the British campaign for equal votes. The story focuses on the lives of working class women involved in the movement. Radicalised and turning to violence as the only route to change, they were willing to lose everything in their fight for equality – their jobs, their homes, their children and their lives.

Heidi Safia Mirza is a visiting Professor of Race, Faith and Culture at Goldsmith’s College, University of London and Professor Emerita in Equalities Studies at the UCL Institute of Education. Heidi advises English Heritage on diversity and established the Runnymede Collection at the Black Cultural Archives (BCA), a race-relations archive documenting the late 20th Century civil rights struggle for Multicultural Britain. She is author and editor of several books, including Young Female and Black, Black British Feminism and Black and Postcolonial Feminism in New Times: Researching Educational Inequalities.

Deborah Withers is a writer, curator, researcher and publisher. Their new book Feminism, Digital Culture and the Politics of Transmission: Theory, Practice and Cultural Heritage, asks: what does it mean to say that feminism has cultural heritage? The book explores how digital technologies have enabled impassioned amateurs to make ‘archives’ within the first decade of the 21st century. In 2010, Deborah founded HammerOn Press, a grassroots publishing label rooted in feminist / queer do it yourself culture. They are also an active trustee of the Feminist Archive South, and have curated two Heritage Lottery Funded exhibitions Sistershow Revisited and Music & Liberation.

Margaretta Jolly is a Reader in Cultural Studies and Director of the Centre for Life History and Life Writing Research at the University of Sussex. Her current book-in-progress is Sisterhood and After: An Oral History of the UK Women's Liberation Movement (forthcoming). Her book, In Love and Struggle: Letters and Contemporary Feminism explores feminist relationships as they have been expressed in letters and emails since the 1970s and was awarded the 2009 Feminist and Women's Studies Association Book Prize.

Booking for Rebels in the Archives is now open. We hope you are able to join us and are able to contribute to this discussion.