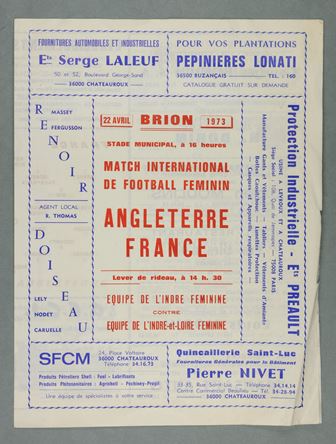 Women’s football is a popular participatory and spectator sport throughout the world, yet in football’s country of origin: Great Britain, women and girls were discouraged from playing the game for many years.

This was not always the case, because football matches between women are recorded from at least the 19th century; and during the First World War female munitions workers famously organised a number of games for the purpose of raising money for war charities. These were extremely well attended; in fact at one point the women’s game looked set to become more popular than the men’s.

Unfortunately, as a result of a ruling by the Football Association in 1921, women were banned from playing the game, a prohibition which lasted until December 1969.  The ban was stringently applied: parks and football clubs were not allowed to let female players use their pitches, and registered referees were banned from officiating at women’s matches. Not surprisingly, the lack of such facilities made it impossible to sustain the sport.

Despite this, some women’s teams – such as the Manchester Corinthians and Dick, Kerr’s Ladies – continued to play, so the flame was kept alive to a certain extent, but it was England’s World Cup triumph in 1966 which really ignited public enthusiasm for all forms of the game. Using this impetus, a group of enthusiastic female footballers - with the help of a number of sympathetic men - created the Ladies FA of Great Britain in 1969.  Women’s teams from across the country were organised into leagues and a number of tournaments were held, including a knock-out cup sponsored by Mitre. Within a few years the sport was making real progress and the Ladies FA – now known as the Women’s Football Association (WFA) - was finally recognised by the FA in 1972 and affiliated to that body in the mid-eighties. 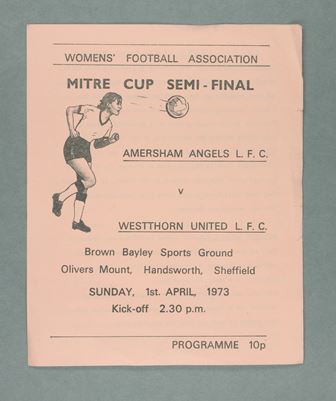 The Mitre Challenge Trophy was the women’s equivalent of the FA cup. The tournament began in the 1970-1971 season and was won in this first season by Southampton.

Life was certainly not easy for the WFA in the early years. Despite increased sponsorship, money was short, and the association relied on the strong commitment of its volunteers and well-wishers. It is therefore a pleasure for the British Library to announce that the hard work of these pioneers of the women’s game can soon be examined in the archive of the WFA, which the Library has just acquired, and which is about to be processed.

The archive contains the minutes of the WFA’s Council, Finance & General Purposes Committee; Officers meetings and AGMs; and also the deliberations of the WFA/FA Joint Consultative Committee which eventually oversaw the winding up of the Association and the handing over to the FA of the organisation of the women’s game.   There are newsletters & journals spanning 1972-1992, many of which the Library does not hold in its general collection (e.g., Women’s Football Information Sheet; Women’s Football; WFA News; Sunday Kicks) and a number of other fascinating items.

All of these materials will prove valuable additions to the British Library’s strong women’s history collections and they will rest on a foundation of unique materials that the Library already holds. One such is an interview in the oral history collections featuring Sue Lopez, who is one of the celebrated proponents of women’s football in the UK (this oral history forms part of the ‘Sisterhood and After’ project and can be accessed via the following page):
http://www.bl.uk/collection-items/sue-lopez-a-lifetimes-contribution-to-sport 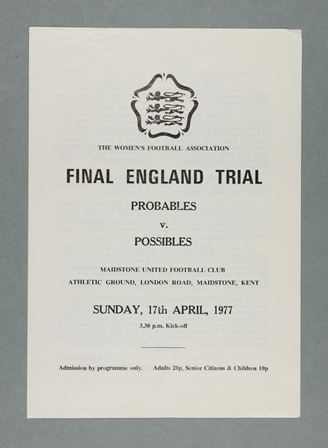 Competition for an England place was strong; this is an England trials programme, featuring he final match between ‘Probables’ and ‘Possibles’.