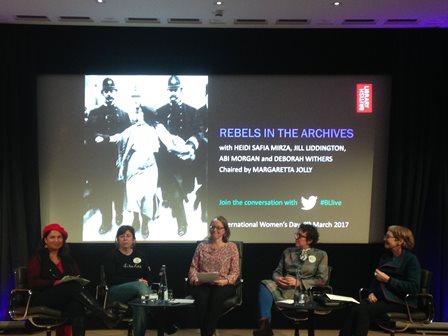 On 21 January 2017, millions of people across the world marched for gender, racial and economic equality. The recent Women’s Marches are the latest chapter in a long fight against misogyny and national and international patriarchy. The heritage of these struggles was echoed by the campaigners who dressed as suffragettes, and carried placards that reminded us that these struggles have been fought before:

“My arms are tired from holding this sign since the 1970s” 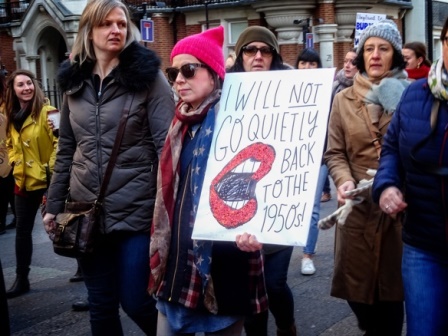 Recent events have brought the inequality women experience on a daily basis to the fore. Whilst reflecting on, and reacting to these political changes, I was completing a PhD Placement at the British Library which included researching stories of the suffragette movement. For me, the resistances, rebels and revolutions archived in the Library’s collections became a source of hope. At a time of political uncertainty, my time spent reading suffragette letters, news reports and protest ephemera, were a reminder to me that histories are made by both politicians and protests.

Suffragettes, like many campaigners, marched to demonstrate the strength of their movement and to pressure the government for political action. The demonstrations were also used as a space to mobilise the public. Many marched with striking and bold banners to communicate their campaign. In June 1908, some 40,000 women marched in London to pressure Herbert Asquith, the Liberal Prime Minister, to support the women’s suffrage bills in parliament. However, Asquith maintained an aggressive anti-suffragist position. The Women’s Social and Political Union (WSPU) retaliated by adopting “more violent, law-breaking deeds” (Purvis 2016). In the following years, the suffragettes’ militant approach was met with police brutality and frequent arrests were made. Yet, the women were not treated as political prisoners, which ensured better conditions and would have acknowledged that their acts were political, but as ordinary criminals. Incarcerated suffragettes surreptitiously produced letters detailing their lives on toilet tissue. In the British Library collections, you can read some of the letters that have been preserved (2 files).

In 1909, imprisoned Marion Dunlop, a member of the WSPU, began a hunger strike with the motto ‘Release or Death’. Several days into her hunger strike, Dunlop was released from prison, as authorities feared that she may die and become a martyr. Many suffragettes went on hunger strike. However, authorities soon decided that imprisoned suffragettes, when necessary, would now be force fed. This was a practice that was previously only used on clinically insane patients in asylums (Williams 2008). Suffragettes’ communicated their accounts of force feeding to the public, which shamed the government.

“The pain was so horrible I felt as if my nose was being pulled off, and I struggled violently”

Quoted from an account of force feeding (The Suffragette 1913)

On 25 April 1913, the authorities stopped force feeding and introduced the Prisoner’s Temporary Discharge of Ill Health Act (commonly known as the Cat and Mouse Act). Once suffragettes reached a level of extreme weakness, they were released from prison, watched by authorities and re-arrested as soon as they had recovered from their hunger strike. The authorities positioned themselves as the watchful cat that was ready to pounce on the suffragette mouse. 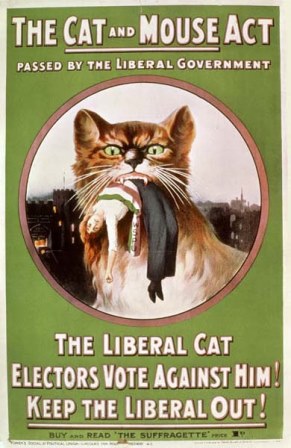 Poster, Made by the Women’s Social and Political Union (1914)

In posters, produced by the WSPU, the Cat and Mouse Act (1913) was used to further the suffragettes fight for equality. The poster represented the male Liberal government as a savage cat, which the public needed to ‘keep out’. Suffragettes represented themselves as vulnerable women at the mouth of an aggressive and abusive government. The posters were popular and “[p]art of the reason for the lasting power and fame of the image may be the ways it overturns long-established associations between women and cats” (Amato 2015: 102). 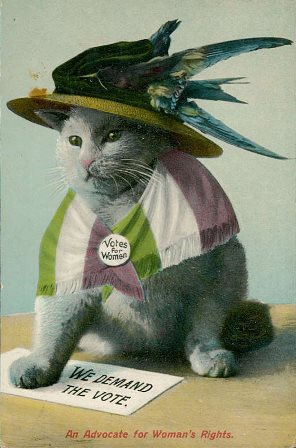 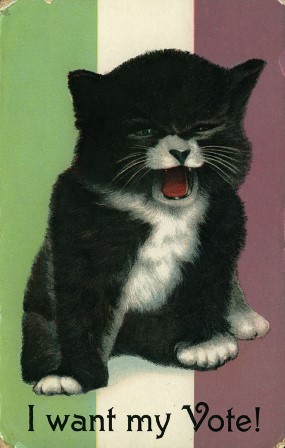 Prior to the Cat and Mouse Act (1913), postcard publishers that opposed gender equality, represented suffragettes as irrational cats. The gendered representation of cats, and their association to the domestic sphere, was used to “portray suffragettes as silly, infantile, incompetent, and ill-suited to political engagement” (Wrenn 2013). The relative cheapness of the postcard, and the humour used, ensured that the images widely circulated (similar to internet memes).

Humour was also used by the suffragettes to subvert gendered prejudices. Suffragette Annie Kenney recalls that they were taught “always to get the best of a joke, and to join in the laughter with the audience even if the joke was against us” (in Cowman 2007: 278). Campaigners’ ability to deploy humour, to subvert messages and to undermine politicians are tactics that are still used today. 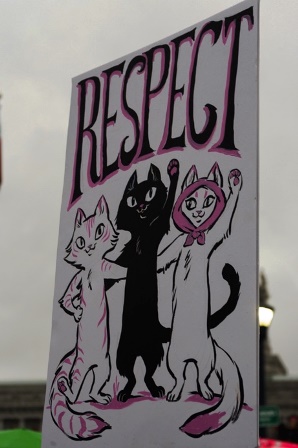 The placards, hats and costumes produced for the Women’s Marches show how people can creatively fight prejudices. Like the suffragettes, pussycats prominently featured in the visual representations of the campaign, in response to comments that Donald Trump made about women. Campaigners crafted ‘pussyhats’ and placards to fight back against this dehumanising and sexually oppressive view of women.

Unlike large NGO organised demonstrations that distribute branded placards, the Women’s Marches represented a range of grassroots protest voices. In the UK, the Bishopsgate Institute recognised the importance of archiving these placards: “people took to the streets to highlight the particular issues they were passionate about… In years to come, the placards and messages from this March will be essential in understanding the concerns of large sections of the UK population at the beginning of 2017” (Dickers 2017). Not only are the subjects of the placards of interest but also how they are made. The time campaigners spent knitting hats, painting signs and sewing costumes, contribute to understanding the craft of the protest.

The Women’s Marches across the world were primarily organised and promoted online. They were also documented on websites and social networks: on Facebook pages, Twitter feeds and blogs. The way in which activism is organised, and represented, further contribute to understanding the politics and practices of a movement. Civil rights campaigner Angela Davis, in her Women’s March speech in Washington, said “history cannot be deleted like web pages” (Davis 2017). Davis’ speech was a call for people, as agents of history, to resist the Trump administration. For me, it was also a reminder that the preservation of our protests are also vulnerable.

Webpages are constantly changing and can be deleted but they can also be preserved in archives. Since 2013, the British Library archive the entire UK domain every year (websites that end with .uk), which can be accessed via the reading room computers at the Library. The Library also has permission, under the terms of the Non-Print Legal Deposit Regulations (2013), to archive websites published in the UK (which do not end with ‘.uk’, for example, the Women’s March on London website). However, this is a manual process and the UK Web Archive invite YOU to nominate websites that are published in the UK but are not part of the UK domain. In doing so, you can contribute to preserving the webpages that document stories of sisterhood, struggle and solidarity, in the hope that these archives will inspire people who could be part of the next chapter of the movement.

On 8 March 2017, the British Library is hosting a conversation on the power and potential of archiving feminist movements with Jill Liddington, Abi Morgan, Heidi Safia Mirza and Deborah Withers. Margaretta Jolly, project director of Sisterhood and After: An Oral History of the Women’s Liberation Movement, will chair this panel of influential feminists as they debate questions of politics, representation and preservation.

The Living Knowledge Network are hosting live-streams of this event at libraries in Middlesbrough and Exeter.

Rebels in the Archives is part of a series of events to celebrate International Women’s Day.