Chantelle Lewis is a PhD student working at the British Library on a project on Black, Asian and Minority Ethnic (BAME) publishing. In this post, Chantelle describes her project and a forthcoming event at the Library. 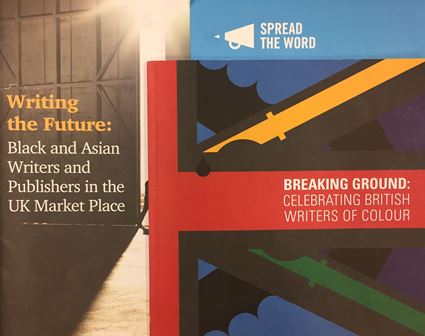 My name is Chantelle Lewis and I am a PhD student in the Sociology department at Goldsmiths College. My research is focused on the lived experiences of mixed race families in mono-cultural British towns. Since beginning my PhD, I have been interested in 'race' in Britain, racialised inequalities and the legacies of colonialism. I am keen to become a public sociologist emphasising how sociological research can help shape important social policies.

I am currently working as a PhD placement researcher within the Contemporary British Publications team at the British Library. The title of my placement is ‘Independent, D-I-Y, and activist BAME publishing, in print and online, in 21st century Britain’. I am interested in the current production of inclusive publications, and how the Library can better engage with independent publishers and activists invested in widening representation of writers of colour.

I began by using the Library’s online catalogue to assess its holdings of independent and activist publishing committed to writers of colour. Following this, I met with writers, publishers and activists, and asked them about their experience of supporting independent expression in print and online. The result of these meetings will be a networking event at the British Library titled 'Bringing Voices Together'.  I was inspired to organise Bringing Voices Together after the project illuminated devolved literary practices which could help structure a pragmatic response by the British Library.

The event will bring together people from the arts, literary, and activist world, together with staff from the British Library. The group will include people invested in the development of platforms for diverse forms of expression, as many face similar obstacles in a predominantly mono-cultural industry.

Whilst meeting with writers, publishers and activists, I began to feel like there were key people I was speaking to who could benefit by connecting with others committed to inclusivity.  Inspired by the on-going project run by Birkbeck History department - History Acts , where historians meet with activists to discuss the possibility of collaboration, I was keen to do something similar as part of my placement. As well as having writers and publishers involved, there will be academics and researchers at the event. I am hopeful that this will allow for interdisciplinary discussions on past and present expression by writers of colour.

Part of Bringing Voices Together will be to gather information for the British Library’s Contemporary Britain web pages on independent publishers who have committed to writers of colour in print and digital formats. This will serve as a starting point for the Library to become actively engaged with the varied formations of contemporary publishing in Britain. This information is also intended to help bookshops and public libraries connect with different voices, as well as offering more wide-ranging options for users of the Library.  We’ll update this post with more details after the event.

Over the coming weeks, there will be a series of guest blog posts from myself and some of the people I have met who are engaged with inclusive independent publishing. Alongside the updates to the Contemporary Britain web pages, these articles will show that Bringing Voices Together is intended to be action driven, coupled with giving a much needed platform to different modes of expression. It also contributes to the notion of legacy and how collaboration can be at the forefront of change.

The fusion of attendees and speakers from publishing, literary, academic and activist backgrounds will allow a range of stakeholders to meet and debate the contemporary issues in publishing and the innovative ways these are being addressed. This will lead to a celebration of resourceful production which has been rewarded by the widening presence of public appreciation. It will also comment on the positive aspects of independent publishing and the opportunities it can present for inclusive expression.

The event gives all involved the opportunity to contribute to a conversation on inclusionary practices in publishing. The principle aim of the afternoon will be to provide recommendations on how the British Library can become more closely involved with writers of colour in independent publishing.