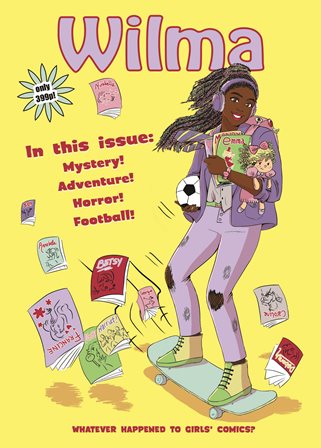 Hello! My name’s Olivia Hicks and I am the latest in the long line of British Library PhD Placements – this time based in the Contemporary British Collections Department and looking at 21st Century British Comics.

The placement follows the logic that the vast majority of comics produced in the Britain are not available at newsagents – the traditional place of comics retail – in fact, it’s unclear how many of them are even available in specialist comics shops. Thus traditional methods of examining a country’s comics culture (namely looking at the readily available published material), are slightly defunct. Therefore, to get a full understanding of British comics in the new millennium, it is important to examine not only the comics output of DC Thomson and 2000AD but also small press comics and independent creators. These alternative comics are currently blossoming in Britain; but what are they about, who’s making them, who are they for, where are they being made and where can they be found?

Being let loose in the largest scholarly sandbox in Britain is an exercise is discipline and restraint. It is a fine line between ambitiously aiming to make the very most of this exceptional opportunity, and bearing in mind that it is only three months (and it has to be useful). It is easy, in such circumstances, to get lost.

In order to combat this, I drafted a research proposal before coming to the Library, identifying the kind of questions and themes that seemed to me particularly pertinent. Then, throughout the first few weeks (has it been four weeks already? Nooooo), I began, in cooperation with the Library, to identify outputs. Some of these outputs had already been identified and agreed upon beforehand (in our case a report and a comic), but others made themselves apparent as I began the placement.

The first, and most important output, is of course the report, where I will attempt to answer some of the questions asked in the second paragraph. The questions are a good mix between those that the Contemporary British Collections Department are particularly interested in, and those which will feed back nicely into my PhD (namely, as a girls comics scholar, it is helpful to understand how women are represented, and how girls are currently catered to).

The second output will be two comics; one will aim to summarise the findings of the report into an easily accessible format for members of the public. The second comic will be for comics creators, explaining how their work falls under the legal deposit scheme. In this way we hope to rectify what is one of the biggest hurdles for studying 21st century British comics and preserving them for future generations – getting small press and independent comics into the Library’s collection.
This is a brief summary of the work I hope to carry out over the next two months. If you have any comments or queries, or simply want to talk more about comics (especially girls’ comics or superhero comics!), please get in touch at olivia.hicks@bl.uk.