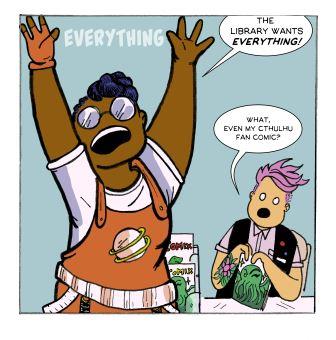 Last month, Olivia Hicks completed a 3 month PhD placement at the Library, investigating our collections of 21st century British comics. You can read more about how this project started in Olivia's blog post at http://blogs.bl.uk/socialscience/2017/12/21st-century-british-comics.html. In this post, Olivia describes the creation of a comic for comics creators, explaining Legal Deposit - and helping to build our collections.

Olivia Hicks is a second year PhD student at the University of Dundee. Her PhD focuses on the superheroine in British and American girls' comics. Her favourite superhero is the Spoiler, alias of Stephanie Brown, because they both love waffles and are penniless students. 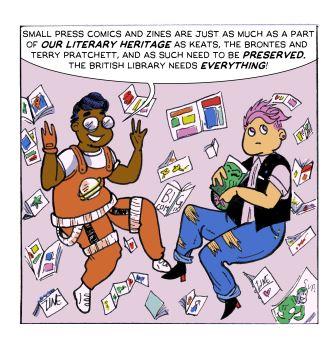 For the first two months of my placement here in the Library, I kept things fairly academic. I regularly went into the reading room, digging up old zines and small press comics – everything from roughly printed, handmade artefacts to glossy, professional-looking publications. I supplemented my research on 21st century British small press comics with plenty of serious and studious academic reading, learning from the grand-daddies of British comics scholarship, David Huxley and Roger Sabin. I complemented this by compiling my data into pretty (if slightly incomprehensible) graphs, which intricately detailed the gender and regional location of each creator I came across. My aim was to use ‘best of British comics’ anthologies as a representative sample for the comics industry; to try and gain an understanding of who was producing comics, and where.

Of course, these books are inherently curatorial, which problematizes the use of them as definitive statements on the UK comics scene. As a humanities student, this made them even more fascinating; what was the vision of UK comics that people were choosing to present. I spent my days poring over the editorials, introductions and statements of intent which accompanied these volumes. They provided a view of Britishness that was varied, and, in the volumes published in the wake of Brexit, increasingly unstable. However, because the Library’s collection of 21st century comics is both overwhelmingly large and also somewhat incomplete, anthologies represented a manageable microcosm for me to examine over my placement.

This was all well and good, if a little numbers heavy and dry for a final report. But this was only the first two months of my placement. The final month was completely different.

Ian, my supervisor, agreed to let me try and aid the Library’s collecting by creating a comic to raise awareness amongst comics creators of the legal deposit system, and that it is a legal requirement for them to deposit their work in the Library. The final month my desk space, already quite messy, became swamped in pencilled pages and I could regularly be found at my desk, headphones in, inking something which was at first, quite incomprehensible to the rest of the office, but which has slowly morphed into a wee comic which is silly, colourful, but packed to the gills with information about the legal deposit. The completed comic is now displayed above my (still messy) desk, and hopefully will serve as a reminder for the next PhD student to not be afraid to get creative with the placement. While my report findings will interest relatively few, the comic has taken on a life of its own in the office, and has encouraged lots of interest in the Library’s online and physical comics collection. By finding a creative angle to compliment your more serious output, you can broaden the audience for your research and get more people engaged, which is the aim for any academic, and indeed, for the Library as an institution. What can I say, the sky is blue, water is wet and people love comics! 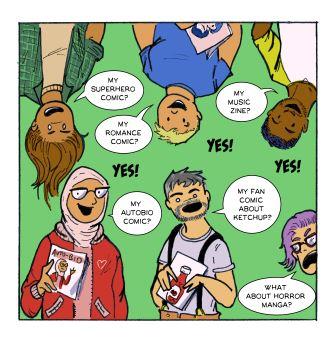 All images in this post from The Legal Deposit and You, by Olivia Hicks (coming to the British Library's website soon)