Please note: The British Sociological Association have uploaded a video of the lecture to their Vimeo site here: https://vimeo.com/302226095

On the 25 October this year the British Library and British Sociological Association were delighted to host Professor Kalwant Bhopal who delivered a timely, insightful and important lecture about the current state of ethnic inequality within the UK higher education system.

Professor Bhopal’s lecture began with a look at the demographics of universities in the UK and differences in attainment between different ethnic groups. Her lecture showed that whilst there has been growth in recent years in the numbers of Black and Minority Ethnic (BME) students attending university, there remain stark differences in attainment and outcomes. For example, White students are more likely to receive a first class or higher-second class degree than BME students. This ‘attainment gap’ is particularly pronounced for Black students from Black African and Black Caribbean backgrounds.

She went on to look at the social and cultural reasons for these differences. Professor Bhopal showed that within secondary education BME students overall achieve good results at A level, compared to their White peers. However, BME students are less likely to apply, or be able to apply, to elite universities such as Oxford, Cambridge and those within the Russell Group. And when they do apply, they are less likely to achieve places. This evidence suggests that cultural and social factors within the higher education system are working to disadvantage BME students, and privilege White students, particularly so those White students from already privileged backgrounds.

So, what are the cultural and social factors that work to maintain White privilege in education, and disadvantage BME students? Professor Bhopal argued that socially embedded racism which operates in all processes, and at all levels, within universities, creates a vastly different playing field for BME students. From the university application process which favours particular forms of knowledge, to teaching at university which prioritises White experience and history, to the fact that within university teaching itself, BME lecturers are hugely underrepresented (only 8% of UK Professors are from BME backgrounds), the mechanics and culture of our university system propagate and reproduce ethnic inequality. Given this, it will come as no surprise that Black students are the group most likely to drop out of university. 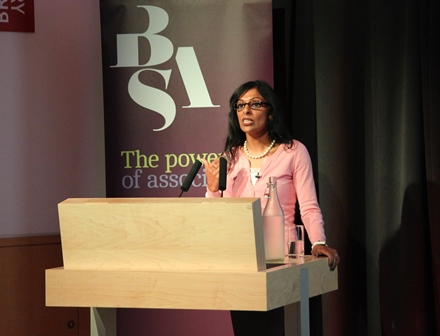 Professor Bhopal was recently commissioned by the Equality Challenge Unit to understand minority ethnic ‘flight’ from UK higher education, to unpick ethnic differences in experience between academic staff and to understand how to attract and retain BME staff. A survey of 1,200 university staff as well as qualitative interviews, gave some clear indications about why BME staff might leave or hope to leave the UK higher education system.

This research showed that BME staff were more likely than their White colleagues to consider working abroad. There were perceptions that certain overseas countries (such as the USA) were more positive in their treatment of BME staff. Within the USA for example, Black Studies is an academic discipline and African American studies is taught at some of the most prestigious institutions including Harvard and Yale. Respondents to the survey felt that within the UK, race and ethnic studies were not highly regarded, and BME staff who worked in this area felt they were harshly judged. There was concern about limitations on career prospects, which was not surprising given the under-representation of BME scholars at senior levels.

Professor Bhopal concluded her lecture with advice and guidance for policy makers and university leaders about ways towards an equal future for all in higher education. First and foremost, higher education institutions must acknowledge that institutional racism is a problem which permeates processes and systems. Central to this is understanding and recognising how White privilege operates in real world interactions within universities; in interviews, at lectures, in seminars, at meetings and in informal and social scenarios. She suggests there should be greater rigour in monitoring BME attainment, with mandatory targets for elite universities around attracting and supporting BME students. Similarly, there must be targets for the recruitment of BME staff into senior roles and unconscious bias training should be mandatory.

The lecture was followed by an abundance of questions about how we achieve ethnic equality in higher education and more broadly, by a very well-informed and passionate audience. The questions and discussions continued into the foyer as the lecture closed, with people queuing up to ask Professor Bhopal to sign copies of her recent book.

To find out more about Professor Bhopal’s recent work, please visit her report with Clare Pitkin on the Race Equality Charter: https://www.ucu.org.uk/HEIs-and-the-Race-Equality-Charter

A podcast of this lecture has been uploaded to the British Library SoundCloud here: https://soundcloud.com/the-british-library/the-annual-equality-lecture-social-justice-exclusion-and-white-privilege-in-universities