Congratulations, then, to Geraint Thomas, 2018 BBC Sports Personality of the Year (SPOTY), and to the magnificent England Roses for this year’s Greatest Sporting Moment. Likewise to toxic and single-use – Word(s) of the Year according to lexicographers at Oxford and Collins respectively. And so to the rather more self-indulgent award that is the British Library’s 5th annual Sports Word of the Year (SWOTY) – a twelve month labour of love monitoring the British sporting press and broadcast media collecting examples of eye-catching words, phrases to make my morning commute more palatable. The nominations for 2018 are:

September (Jamie Donaldson summing up Dustin Johnson’s poor form on day 2 of 2018 Ryder Cup in Paris, BBC 5 Live Sport) I don’t know what DJ is playing out there but if it had been stroke play it would have been a snowman.

September (David Conn confirming FA’s decision to withdraw proposed sale of Wembley Stadium, Guardian Sport): executives were clearly interested but potential buyers will no doubt have taken note in the split in opinion between the suits and the blazers.

December (Richard Williams reviewing recently released Russian film Coach, Guardian Sport): Why choose a Panenka at a moment like that?

December (Jeremy Whittle reporting Jonathan Vaughter’s assessment of Sky’s decision to withdraw its sponsorship of cycling, Guardian Sport): ‘He [Dave Brailsford] has an impressive ability to reach into the toilet and pull out chocolate’.

The rather neat distinction between suits [= ‘business executives implicitly motivated by financial profit’] and blazers [= ‘committee members implicitly motivated by maintaining the status quo’] is a wonderful example of metonymy: a figure of speech in which a thing or concept is referred to by the name of something closely associated with that thing or concept (e.g. according to Number Ten is common journalistic shorthand for reporting a statement by the Prime Minister). Panenka [= ‘penalty kick in football in which the ball is chipped delicately into the middle of the goal after the goalkeeper has dived to one side’] provides a rare footballing example of eponymy: a person after whom something is named. Anybody of a certain age will know this audacious approach to penalties is named after Antonin Panenka, who successfully deployed the technique in a penalty shoot-out to secure the 1976 UEFA European Nations’ Cup for Czechoslovakia against West Germany. The Panenka is so risky it remains pretty rare, but sufficiently iconic that English football fans will recall SPOTY host, Gary Lineker, famously missing a penalty with a Panenka in a friendly against Brazil in 1992 (if he’d scored he would have equalled Sir Bobby Charlton’s then England goalscoring record). And we all remember Andrea Pirlo eliminating England with a Panenka in a penalty shoot-out at Euro 2012, although as an Italian he would call it il cucchiaio [= ‘the spoon’]. Having a technique named in one’s honour is surprisingly rare in football – the Cruyff turn is probably the only other widely used term in English – but this kind of accolade is more common in more ‘acrobatic’ sports. Different types of jumps in figure skating, for instance, include the Salchow, the Axel, the Lutz etc. and this year two new eponyms entered my sporting lexicon – the Biles [= ‘double half layout with full twist’ named after US gymnast, Simone Biles’] and the Nat-meg [= ‘run-scoring shot despatched between the legs’, named after England cricketer, Natalie Sciver].

Two entries here are illustrative of sporting jargon: hero snow [= ‘snow that is soft on top and firm underneath’] and clutch [= ‘critical situation in which the outcome of a game or competition is at stake’]. In addition to the reference to long jump here, in 2018 Guardian journalists have regularly alluded to clutch serves in tennis and clutch putts in golf. Jargon refers to technical terminology used by a speech community – i.e. for our purposes here, sportswomen, sportsmen and sports’ enthusiasts – that can mystify outsiders.  Slang is even more subversive, more playful, and thus potentially even more incomprehensible and three items probably fall into this category. 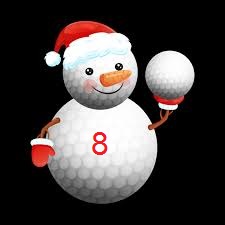 Snowman [= ‘a golf score of eight shots on one hole’] is a delightfully imaginative association of the figure 8 with a snowman (i.e. a circular head atop a slightly larger circular body). This kind of visual shorthand is equally apparent in the terms bagel (see SWOTY 2014) and Audi (see SWOTY 2017). Top bins [= ‘shot into top corner of goal’] and badger [= ‘overly keen/slightly know-all individual’] are expressions I first encountered among my (late teen/early 20s) children and friends. Badger, for instance, I first heard used among university hockey players to refer to a somewhat annoyingly enthusiastic club member who's never late for training, always brings the right kit, always has an opinion during half time team talks etc. – presumably the name derives from the notion that, like actual badgers, these are rare qualities among students?

The expression hills or flats is probably best characterised as Australian dialect, while one might speculate that reach into the toilet and pull out chocolate is either US dialect (Vaughters is American) or purely idiolectal. Playing cricket in the 1970s and 1980s I certainly recall spinning a bat in the air and calling either bridge [= ‘the bat lands face down’ i.e. presumably the equivalent of hills] or stream [= ‘the bat lands face upwards’ i.e. presumably flats] to determine which side had choice of batting or bowling first. To this day, amateur tennis and badminton players mirror this practice by calling rough or smooth to decide who serves first, based on tossing or spinning a racket so that the knot in the strings either stands proud or flush to the the racket head. The phrase reach into the toilet and pull out chocolate is, however, completely unfamiliar. A rather unwholesome image it is, nonetheless, analagous to polishing a turd, although the implication of pulling out chocolate is you can produce something desirable from something apparently worthless. The meaning is absolutely clear and reminds me a little of the claim, heard frequently in the mid-twentieth century, that if ever England needed a fast bowler they could whistle for one down a mine in Yorkshire.

Of the entries here only suits (but, surprisingly, not blazers) is included in this sense in the OED; clutch is recorded in Oxford Dictionaries Online; Panenka warrants an entry in Collins Dictionary and hero snow, badger and top bins have been submitted to Urban Dictionary. Of the other five, to my knowledge, none appears in conventional dictionaries, but snowman is included in Mike D’Auria’s Golf Fore Ever (2010) and Wikipedia includes Jillaroos in this sense – although, intriguingly, Adrian Room’s Dictionary of Sporting Games and Terminology (2010) suggests it refers to the Australian Women’s U21 Hockey team. The phrases hills or flats and reach into the toilet and pull out chocolate have proved elusive beyond the references here (and associated articles), which makes the British Library’s role in capturing and archiving this kind of linguistic evidence in our newspaper collections, TV and radio archive and UK Web Archive invaluable for anyone interested in documenting this kind of vernacular sporting language.

Posted by Jonnie Robinson at 10:04 AM