In December 2020 Rebecca Riddleston and Georgia Olive, Customer Service Apprentices in the British Library’s Learning team, visited the exhibition Unfinished Business: The Fight for Women’s Rights. Grounded in their own personal experiences as young women, here they reflect on their responses to the exhibition and some of the objects that particularly resonated with them.

During their apprenticeship, Rebecca and Georgia learnt more about the audiences we work with in the Learning team, gained new experiences, knowledge, and skills such as web editing, and provided invaluable support for a range of events and projects for school learners, teachers, families and young people, such as our National Library of Miniature Books.

Please note that this post contains some discussion of abortion and sexual violence.

I felt a particular affinity with Gloria Steinem’s statement ‘The truth will set you free but first it will piss you off’ whilst walking through the Unfinished Business exhibition. A sentiment that I not only felt in the exhibition space, but one that I have felt many times whilst navigating through life as a young woman.

This exhibition evokes pride, solidarity and anger, but the main emotion that hit me was exhaustion. As we got further and further in, the main phrase that came to mind was ‘just leave me alone’. It may not be a particularly profound sentiment, but many of the exhibition objects reminded me of just how many times I've been driven to exhaustion just by simply having to exist as a girl and woman. Why does that person care what I’m wearing? Why won’t that man leave me be? Why is it that seemingly every choice I make, is one that’s inherently based in my gender?

A few items particularly stood out to me as being exemplary of my feminine fatigue, namely the No More Page 3 t-shirt and the Consent Zine. 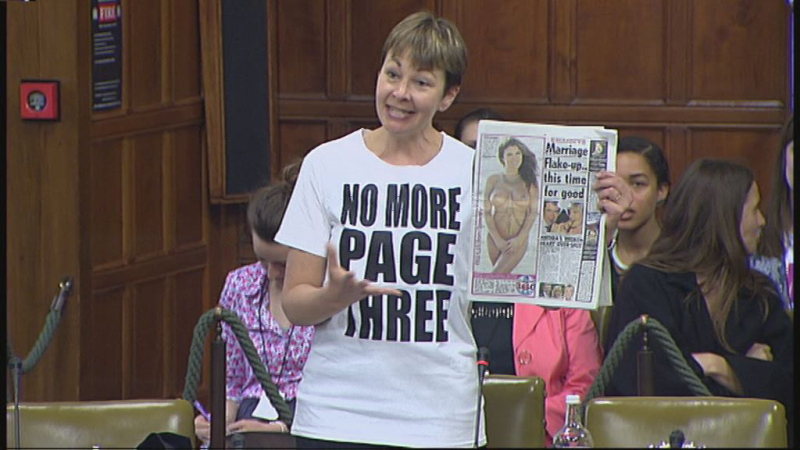 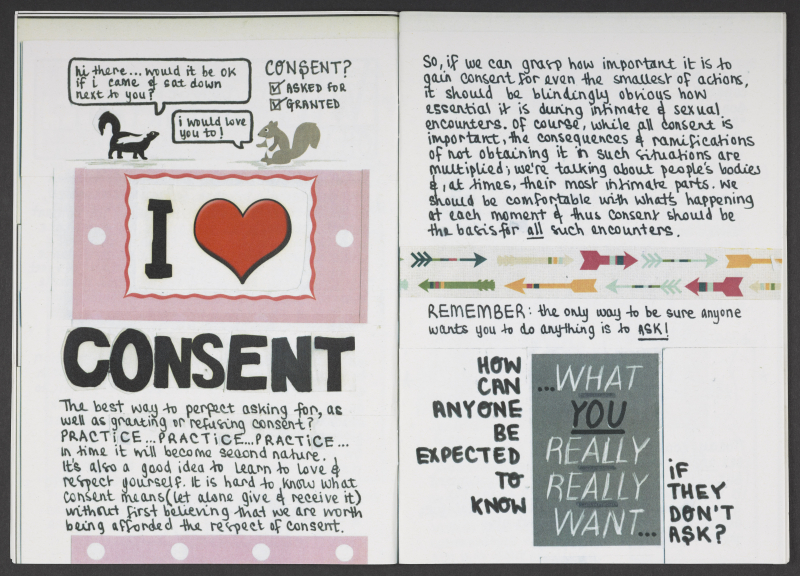 Caro Berry of Pretty in Punk, ‘Towards a Pro-Consent Revolution’. London, 2013. © Caro Berry

I remember my first time seeing a Page 3 spread was when I was barely pubescent and I found some copies of The Sun in my friend’s bathroom. It was one of those things that I knew existed but had been so normalised that I hadn’t really processed how it affected me and the way I perceived myself. As puberty started I knew that I was already being seen as a sexual object, but at that point I had absolutely no idea what the male gaze was.

If only I’d been to an exhibition like this at that age, I would’ve spotted the Laura Mulvey quote nestled in the corner that reads, ‘in a world ordered by sexual imbalance, pleasure in looking has been split between active/male and passive/female’. Maybe then I would’ve been able to look at the women on Page 3 (who couldn’t look back at me) and not project my own internalised male gaze through them and back onto myself, but instead thought: why the hell am I looking at softporn whilst on the loo? 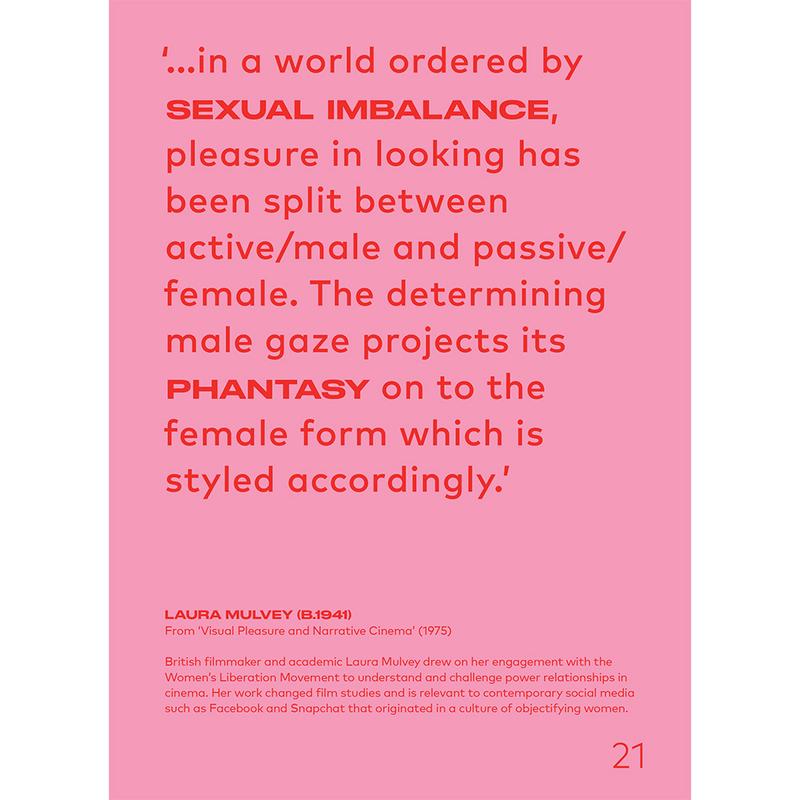 Laura Mulvey quotation as it appears in the book that accompanies the exhibition, edited by Polly Russell and Margaretta Jolly.

Initially I found myself frustrated and very much overwhelmed, looking up and around at all of the injustices on display in the Unfinished Business exhibition. Questions spun around in my head, many reoccurring ones such as ‘why?’ and ‘wait, what?’. In the section on ‘Autonomy’, I spotted a question that I thought at first glance seemed easily answered. ‘Do you have control over your body?’ was written on a panel at the beginning of the exhibition. 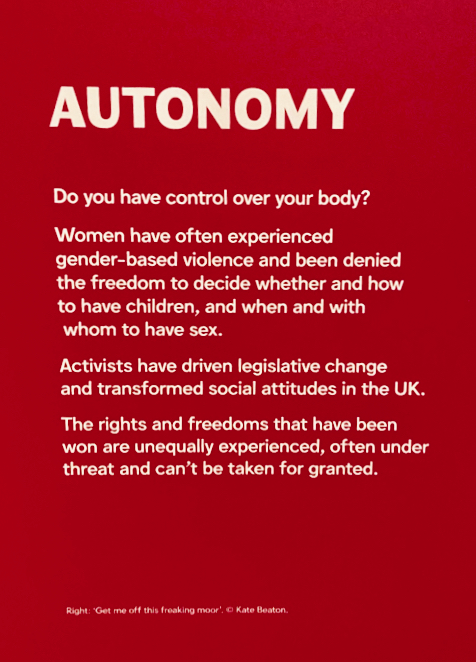 Panel introducing the sub-section on 'Autonomy' in the 'Body' section of the exhibition.

I stood and thought about this for a moment, as if someone was interrogating me directly. Yes, I have control over my body. I decide when I am hungry, so I eat. I can wave my hand, and I can close my eyes. It is such a simple question, yet it runs deep enough to send me spiralling. The answer became abundantly clear to me as I explored the exhibition in more detail.

Being in this environment brought up a lot of personal experiences for me. It made me feel an overwhelming resentment toward the men who feel it is ok to comment on a woman’s body, or even touch it, unprompted. Instances like this made me very aware of the lack of control I have over my own body, from the way it is perceived to the way it is treated. The one sure answer I had to this question was that I wasn’t alone in feeling this way.

In the exhibition I was inspired to read about the work a wonderful charity called BPAS (British Pregnancy Advisory Service) has done to decriminalise abortion in Northern Ireland. The abortion debate is a topic that never fails to get me worked up. It is an opinion that I’ve never been able to comprehend properly, that a woman should not get a say in whether or not she should grow a human inside her stomach, and give birth to it.

This constriction of women’s rights to their own anatomy of course extends further into their private lives. I was utterly perplexed to find out that in the UK marital rape was not even an established crime until 1991, just 30 years ago. It is unfathomable to me, that many of the people I work with, and a lot of my family, grew up in a society where a man could rape his own wife and face no consequences. To me, that sounds medieval. 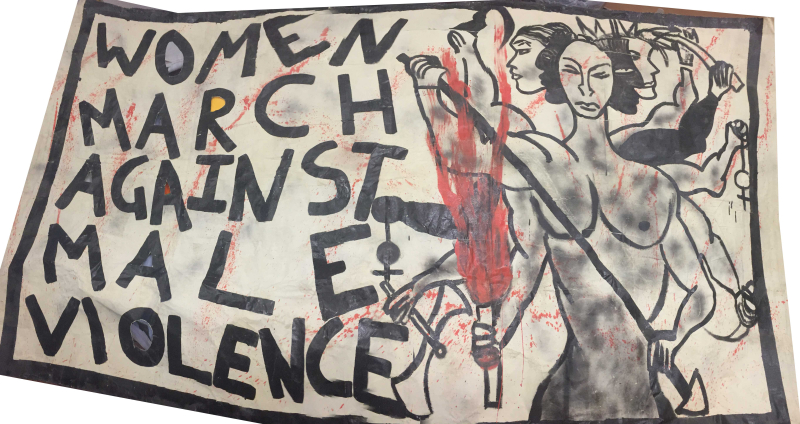 While this information made me feel shocked and completely disgusted, it oddly gave me a sense of optimism for the strides that could be made in my own lifetime. Surrounded by the work of activists, I could see how change happens. No, I do not have complete control over my own body. But I am working on it, and I will get there.

Find out more about apprenticeships at the British Library

Our public spaces are closed for the moment. In the meantime, you can visit our website Women’s Rights which highlights the powerful and vital stories of feminist activism and agitation in the UK. The website invites visitors to explore the complex history of women’s rights through the voices of our contributors, and through the lens of the rich collections – from photographs, printed material, audio recordings and videos – held at the British Library.  You can also find themed podcasts, recordings of events related to the exhibition, and recordings of events held by partner libraries in the Living Knowledge Network. 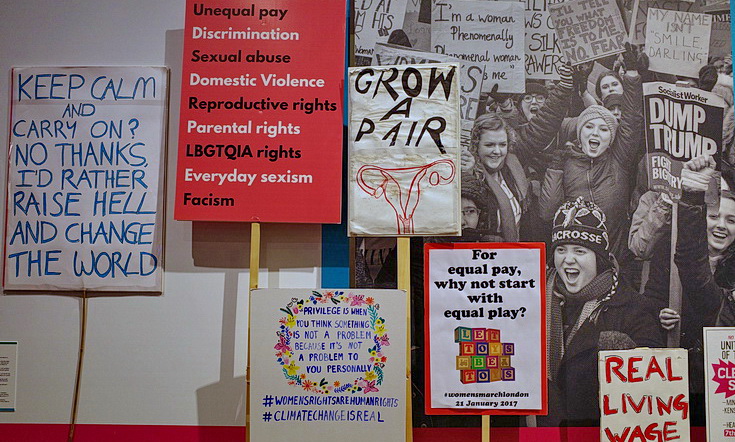 A selection of placards displayed in the Unfinished Business exhibition.