Dr Hannana Siddiqui is a leading multi-award winning expert and activist on violence against black and minority women. She has worked at Southall Black Sisters for 35 years and is also a freelance consultant researcher and policy advocate. She has published widely on black feminism and co-edited the book, ‘Moving in the Shadows’ in 2013.

Walking around the British Library’s exhibition, Unfinished Business, with mask and mobile phone camera in hand, I went mad with taking photographs. There was so much to take from the first edition of Mary Wollstonecraft’s A Vindication of the Rights of Woman and protest poems written on toilet paper in Holloway Prison by Sylvia Pankhurst to objects and images from modern feminism, both familiar and unfamiliar. A world of discovery for old feminists and new; but also much to learn for the unaware and the unreconstructed.

In one corner, there are pictures of me! (Surreal or what?) The section on Southall Black Sisters (SBS) is part of a familiar history, but distilled into a few objects. SBS has a long and proud history of struggle and survival, having led black feminists' fight against gender-based violence in black and minority communities for over 40 years. I saw the annual report that I assisted in writing, and a poster and note from the Free Kiranjit Ahluwalia Campaign that I helped to win. Kiranjit is an Asian woman who we campaigned to free from life imprisonment after she was convicted of the murder of her husband, who had subjected her to ten years of violence. In 1992, the conviction was overturned, and she was released. The landmark case reformed the law of provocation so that it took account of the cumulative impact of abuse on women; and propelled the issue of domestic abuse in Asian communities onto the national agenda. A poignant piece, which I had to dig up from piles of documents in the office, was the Charter of Slavery, a note in which Kiranjit promises to give up all her freedoms and hopes to placate her abusive husband. A sad moment in history, but also, ironically, a liberating one, as its presentation in court proved the history of abuse which ultimately freed her. 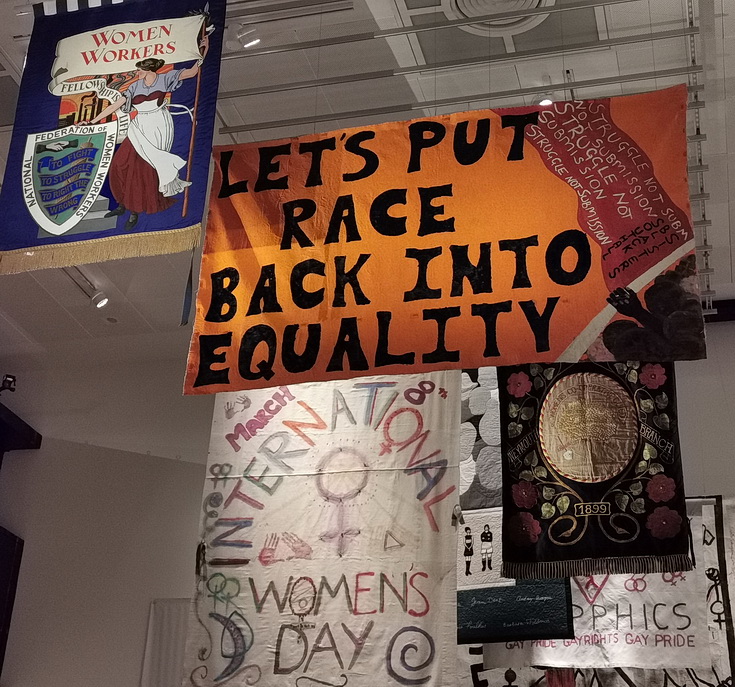 Banners on display at Unfinished Business

The other pictures I captured on my camera and in my mind included key campaigns led or supported by black and minority women. One featured Sophia Duleep Singh, a lesser known suffragette, who was a recent discovery for SBS too. The survivors at SBS acknowledged her contribution to obtaining women’s right to vote in a banner at the centenary celebrations in 2018. Another section showed the Grunwick Strikers, led by Jayaben Desaiand other Asian women to win worker’s rights. Camden Black Sisters were also featured along with black feminist icons such as activists and authors, Claudia Jones and bell hooks, as well as black politicians, space scientists, artists and punk rockers. Old banners also hung from the ceiling (remember to look up!). One SBS banner marked a 1980s march on violence against women. The banner was based on the controversial SBS poster of a multi-armed Goddess, Kali, holding multiple weapons to fight male violence. Also hanging up was the banner produced for the successful legal battle for our race equality fight for specialist services in 2008. These and other exhibits highlight the intersections with race, gender and class inequality which black and minority women have led on to address without proper credit, until now. 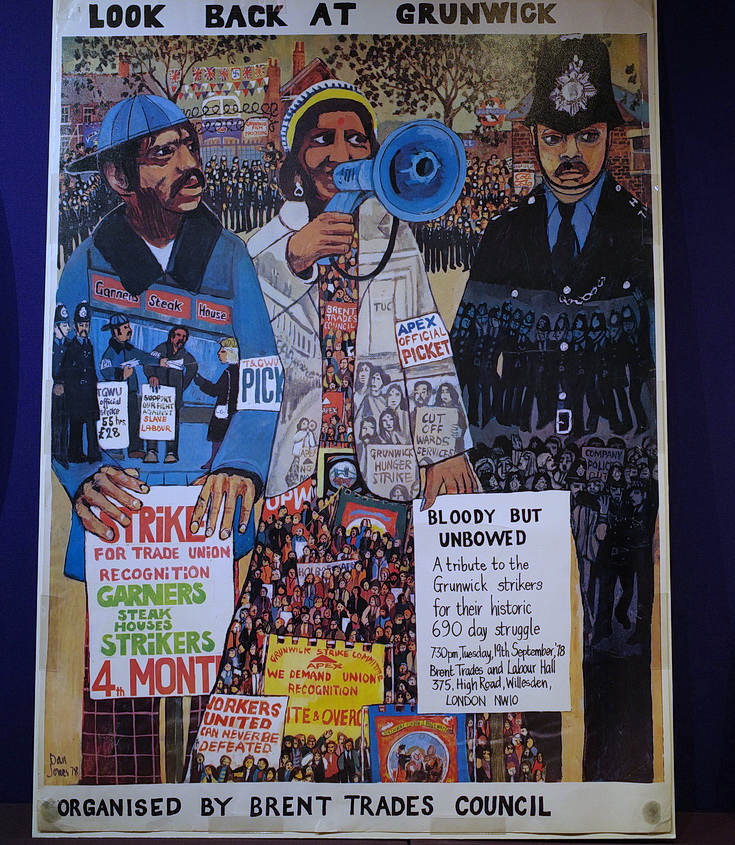 Dan Jones, Look back at Grunwick, 1978 On loan from Bishopsgate Institute.

I bumped into Susie Orbach and we shared our enthusiasm for the exhibition, which we were both unfortunately rushed through in the early morning before a busy day at work.  Susie co-founded the Women’s Therapy Centre back in 1976, a place where I have referred women seeking recovery from the trauma of abuse. The section on her work in the exhibition connected the past with the present. Mental health problems are now heightened with the Covid-19 pandemic and over a year of lockdowns and social distancing. Domestic abuse has surged with black and minority women particularly affected. Asian women are three times more likely to kill themselves than women generally, and I worry how many are being driven to suicide and self-harm while in isolation or locked in with abusive partners or family members. SBS and other women’s groups have seen a rise in mental health problems, and have called for more action from government to alleviate the crisis.

In the midst of these and other troubles, the feminist struggle continues, and there is indeed ‘unfinished business’. However, although we still have much to do, the exhibition is also a symbol of hope as we know from the past that victories, small and great, have been won and so will be in the future. I need to go back as there is much more to see and know. Next time, though, I must remember to take my husband!