This series of six posts highlights a discrete part of the archive, consisting of published and unpublished material, editorial documents and ephemera from Barnett’s time as a member of the editorial collective of a little-known revolutionary weekly newspaper titled 7 Days. In this first post, historian of the British New Left Dr Madeleine Davis introduces the newspaper and the series.

Fifty years ago this month a very unusual newspaper appeared on UK newsstands. Titled ‘7 Days’ and with a bold red and black design, it might have caught the eye both for its deliberate revival of Picture Post-style ‘photo-journalism’ and for the selection of topics trailed above the title-piece. Gambling/Capitalism/Sex and Children/Arms Deal Exposure appeared above an image headlined SS Reunion in Bavaria, one of two ‘photo-features’. The other feature was a photo-record of an army action against ‘rioters’ in Derry, in a packed issue that evoked yet subverted standard newspaper fare.

A ‘Life’ section detailed conditions in psychiatric prison; ‘Ideas’ featured a primer on Marxism from Gareth Stedman Jones; ‘Sports’ delved into the economics of dog racing; ‘Arts’ featured Stuart Hood on the TV industry, as well as film and book reviews (Bertolucci; realism) and an ‘ad of the week’ dissected (in this issue) a pro-feminist critique of a gas cooker ad campaign. On top of this there were foreign and home news sections and a special feature on the gambling industry.

But if the paper’s radical socialist credentials were not in doubt, it differed from other left organs in having no party allegiance nor editorial sermonising, nor even an editor in chief. 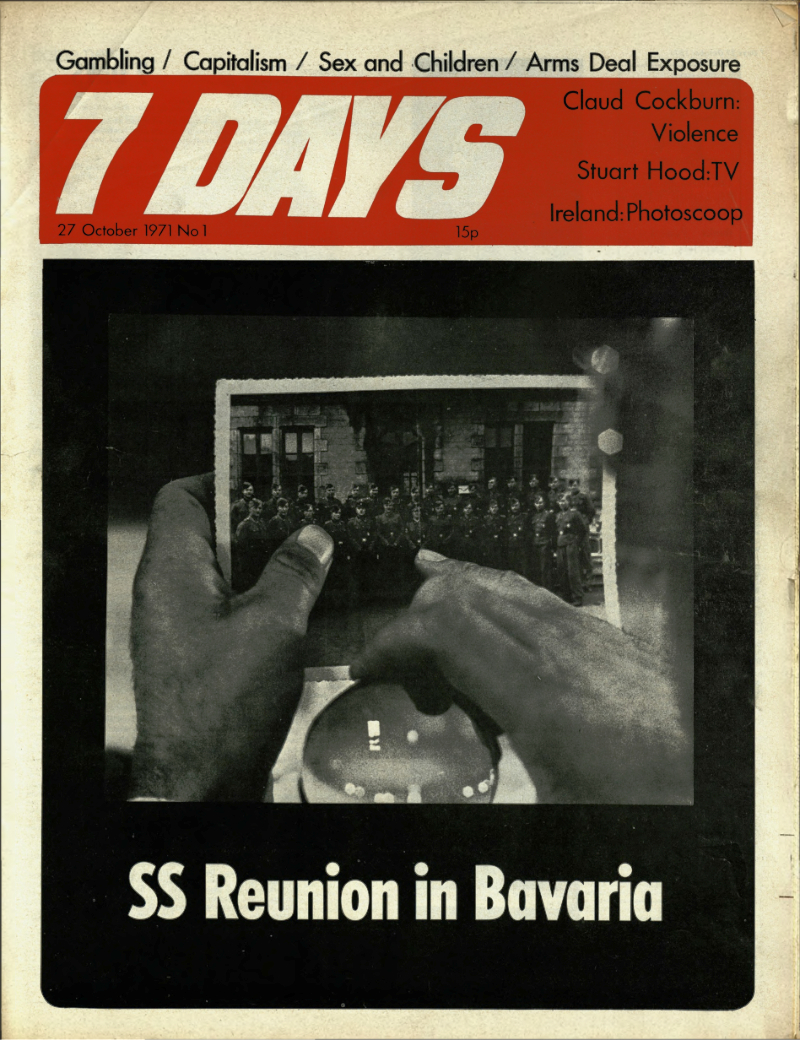 The new venture’s launch was preceded by a publicity and funding drive, for the aim was to secure commercial distribution and a circulation of up to 40–50,000.  Dummy issues had been sent to sympathetic contacts in the press, and funds, with an initial target of £25,000, were raised through donations and loans from a network of left-leaning contacts. Ex-Communist Party names figured prominently in lists of potential donors, as did artists David Hockney and Sylvia Guirey, as well as Sonia Orwell and playwright John McGrath.

As W.L. Webb noted in a perceptive pre-launch write up in The Guardian in September 1971, the names of the Trustees of the magazine – respected journalist Claud Cockburn, artist John Berger and former BBC Controller Stuart Hood, were designed to reassure: ‘if the kids must have revolutionism, then this might be the brand for the station bookstalls’.[i]  Yet Webb was cautiously optimistic, noting with approval that 7 Days, ‘the new hope of the New Left’ appeared to be taking both its journalism and its Marxism seriously, seemed more ‘above board than underground’, and in its determination to ‘break out of the ghetto readership’ of the far left was certainly doing something new.

One of Webb’s chief sources must have been the fold out flyer distributed in advance, which set out the paper’s ambition and appeal to commercial distributors. ‘It will look good, it will read well, and it will explode onto a market that has never been touched before’.[ii] The market figured was professional and semi-professionals working in education, medicine, architecture, technology, media and the creative arts, as well as student radicals; even ‘housewives and mothers who have themselves been through further education’. As Webb noted, this was the ‘68 generation who’d ridden a revolutionary wave then been beached on the shores of Conservative election victory. Whether it was a big enough constituency to justify the planned print run of 50,000 copies would remain to be seen. 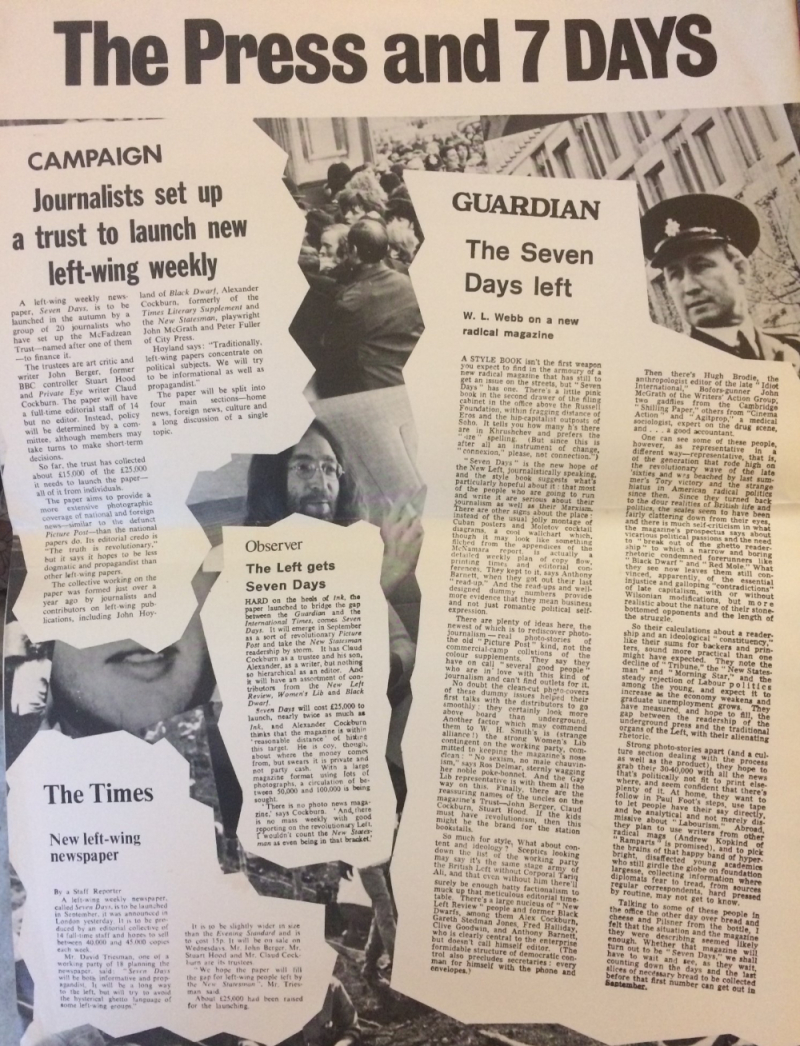 7 Days was launched just over a year after an earlier paper, Black Dwarf, folded. Black Dwarf  had been founded in 1968 by a group including Tariq Ali, Sheila Rowbotham and well-connected literary agent Clive Goodwin. Goodwin, described by John  McGrath as an ‘entrepreneur of the left’ [iii] conceived the paper, and it was named, by poet Christopher Logue, after a satirical paper published by radical reformer Thomas Wooler between 1817-24. Beginning as a self-styled non-sectarian paper of the radical left, and conceived, in the heady atmosphere of 1968 as a ‘political action’ not just a means of communication, it adopted a bold and confrontational style while also maintaining strong links with the more austerely intellectual radicalism of the New Left Review, with whom it shared offices and several personnel.

Amid the ferment after 1968, the Dwarf’s editorial board split between a group increasingly influenced by Fourth International (FI) Trotskyism and a group wanting to maintain an independent stance. [iv] There were also tensions over the paper’s stance on feminism, vividly recalled by Sheila Rowbotham in her memoir Promise of a Dream. When in early 1970 Clive Goodwin, who owned the title, refused to allow Black Dwarf to become the official paper of the Trotskyist International Marxist Group (IMG), the FI contingent around Tariq Ali left, founding Red Mole and then Red Weekly, which was formally affiliated with the IMG.

From March 1970, Black Dwarf was edited from Clive Goodwin’s flat on Cromwell Road, and then from new premises in Soho, by Anthony Barnett, with a group including Rowbotham, John Hoyland and Fred Halliday.  Eight issues were produced in this way between March and September, the style changing in a way that in some senses prefigured 7 Days. The paper’s final issue appeared on 5 September 1970, late. It contained no formal announcement of suspension, though a statement reflected a little on its record while also speaking of money problems. A ‘Black Dwarf benefit painting sale and exhibition’ was advertised with work by artists including David Hockney, Joe Tilson, Richard Hamilton and Ralph Steadman, but the paper did not reappear.

Some months later, however, some of those involved set up a new working group to discuss a new paper. This group included activists of the Women’s Liberation Movement, which held its first conference in the same year, and contacts from New Left Review, the student and independent left.[v]

Though there was some continuity from Black Dwarf in terms of personnel and in the insistence on political independence, the new publication was intended to be of a quality and seriousness sufficient to break out of the ‘underground’, with all the precariousness and minimalist production values this had implied.  Pre-publicity made much of the seasoned journalistic talent involved, as Alex Cockburn, who had worked on the TLS and New Statesman, was a key figure and de-facto editor.  It also claimed a gap left by the rightward shift of the New Statesman under Richard Crossman’s editorship.

As Rosalind Delmar has pointed out, 7 Days was emphatically not part of the counterculture – ‘Bauhaus rather than Aubrey Beardsley was being channelled’. Rather it was more representative of an independent and intellectually-oriented New Left tradition that developed from the late 1950s ‘between communism and social democracy’, and which underwent significant radicalisation, as well as some fragmentation, in the late 1960s. 7 Days was in part – at least for some of those involved - an attempt to broaden the reach and scope of this tradition, as well as to take seriously (as much of the rest of the radical left seemed unable to do) the emergent politics of women’s liberation.

The moment must also have seemed both urgent and propitious, for the cusp of the 70s was, as this series will remind us, an intensely eventful and conflictual period in British politics. Social and protest movements (industrial militancy, women’s and gay liberation, black power) asserted themselves against an establishment which itself was regrouping ideologically and politically in ways that would crystalise more clearly toward the end of the decade.  In the six months of its existence 7 Days covered the wave of industrial action against the imposition of the 1971 Industrial Relations Act; the Mangrove trial, the IRA, UVF and Angry Brigade bombing campaigns and the Bloody Sunday massacre in Derry.

Simply as a contemporaneous record of these events, 7 Days is fascinating and important. For historians of the left, it is the more so because its political perspectives had continually to be negotiated amongst a journalistic and production team which recognised no party discipline, avoided the simplistic revolutionary sloganeering characteristic of the far left, yet saw itself as supporting all those ‘who are making the foundations of revolutionary change’.

A pre-publication document set out the strategic perspective hammered out thus: ‘7 Days recognises that with the significant exception of Northern Ireland, British capitalism wields its power not through violence or terror (though these weapons are in the cupboard) but with the consent of the mass of the people. People tolerate the intolerable because of the inherited weight of ideology …. That’s why 7 Days takes its starting point from people’s daily lives’. That was also why 7 Days covered, sometimes in groundbreaking ways, issues of mental health, abortion, children, the mass media and ‘popular arts’. Taken together, this social and cultural coverage amounts to a unique record and a considerable achievement. 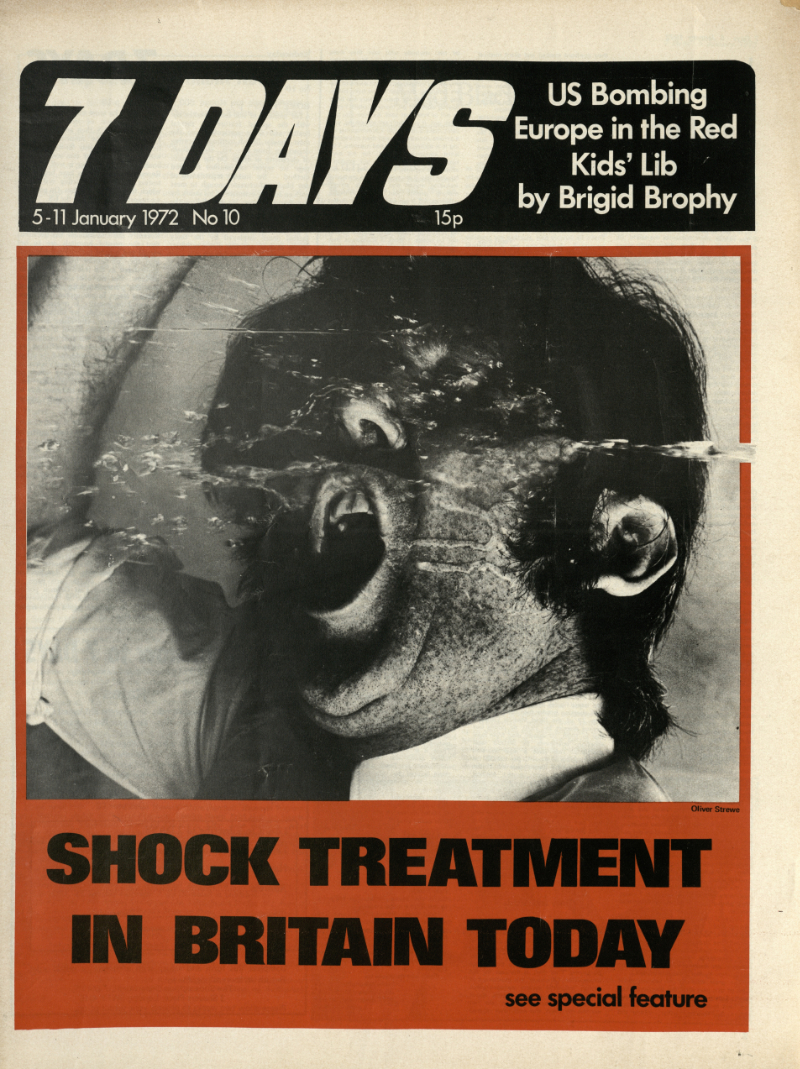 Independence fostered innovation, but also tension and frustration. While the published contents of the paper usually contained little direct editorial content, internal papers are replete with memos and counter-memos criticising its record and disagreeing over its direction, both political and editorial. ‘Left papers are real heartbreakers and money –burners’, remarked Rowbotham of her time at Black Dwarf.[vi] In the event, it was financial crisis that brought the career of 7 Days to an abrupt end.  Optimistic projections for readership were not borne out in sales figures, and by February 1972 losses were reported to be running at £500 per week, while two thirds of the £16000 launch capital raised was spent.

In March 1972, after twenty one issues, 7 Days went into ‘suspended animation’ while funds were sought for a relaunch.  The relaunch never happened, and apart from one final Vietnam-themed issue in May 1972, which commemorated the evacuation of American troops from Saigon with the doubly-apt headline ‘Who’s for the chopper?’  the paper disappeared. 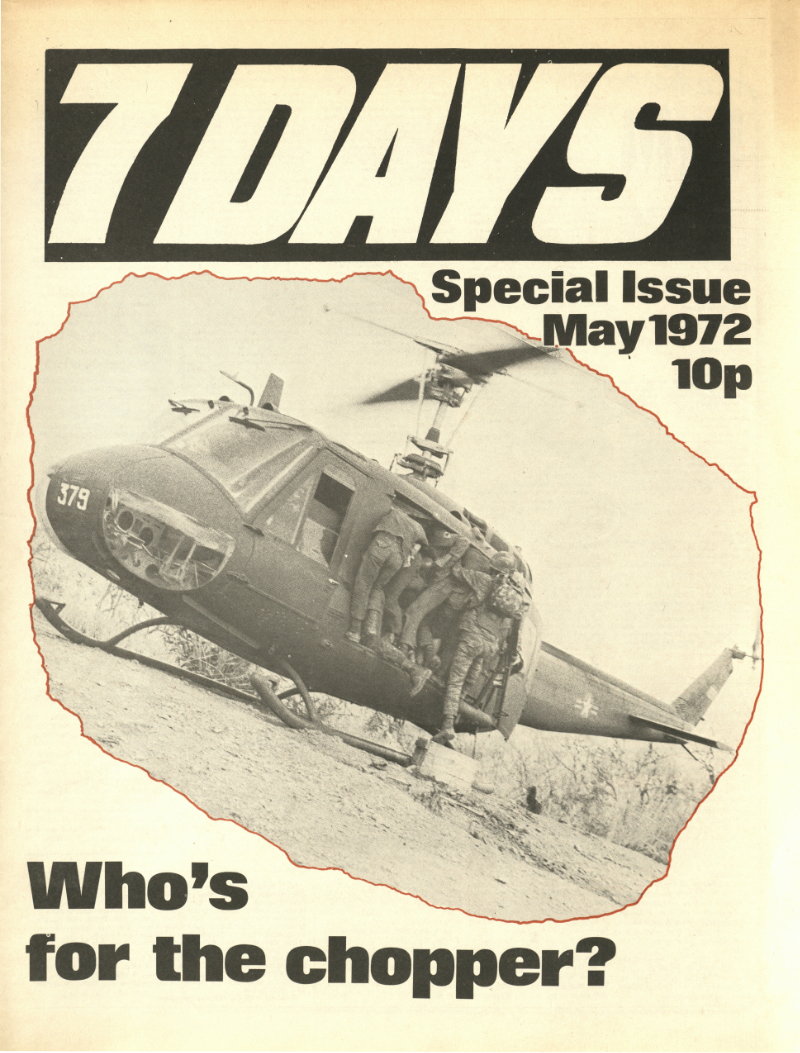 Few people, even among historians of the radical left, have ever heard of 7 Days. It is far less well known than International Times (IT), usually regarded as the first paper of the London underground and alternative press, than Oz, made famous by the trial for obscenity of Richard Neville and others, or even than the Black Dwarf which it in some sense replaced.  I first came across it when researching the history of the New Left Review, interest piqued by a reference in some unpublished editorial documents to a spin-off publication in which several NLR editors were involved.

Years later, acquiring material for an exhibition on the activist histories of the British New Left, its striking visuals and neglected history made me keen to include it, so I got in touch with Anthony to see if he would let me use some of his originals. Fascinated anew, I proposed its addition to the Amiel Melburn Trust’s online archive of radical periodicals. From Anthony’s collection, the whole run was digitised and made available in 2017, funded by the Trust, and with an introductory essay by Rosalind Delmar, the paper’s production editor.

This series of posts over the next few months, will give a space to some of those who produced it to tell the story of the paper and of their own involvement. In doing so we hope to recover not just the history of 7 Days, but the feel and significance of a moment.

[ii] Unpublished document ‘Add 7 Days to your week’, papers of Anthony Barnett, BL, not yet catalogued.