Six months that launched the Seventies

In the second part of this series, Anthony Barnett's guest post recalls his time as a member of the editorial collective of a little-known revolutionary weekly newspaper entitled '7 Days'. In 2020 the British Library acquired the papers of Anthony Barnett, best known as the founder of the campaigning organisation Charter 88 and the website openDemocracy.

Looking back half a century to 7 Days makes me realise the pain of its failure which is still buried within me - it was such a glorious achievement and had such promise. I’ve been asked to say something about how I became involved, what I saw as being at stake, the experience of producing it, and how it influenced me. To start to answer them I want to signal why it was so good and why something so good failed.

What 7 Days expressed in its range, radicalism, intense seriousness and dramatic layouts was the radical spirit and global intelligence of the young English left of ‘the Sixties’. It was the anti-Vietnam war movement turned into stunning photojournalism. It was the best revolutionary radicalism, shorn of its Trotskyism. It was a pioneering engagement with feminism and anti-racism. It was fresh and fearless. 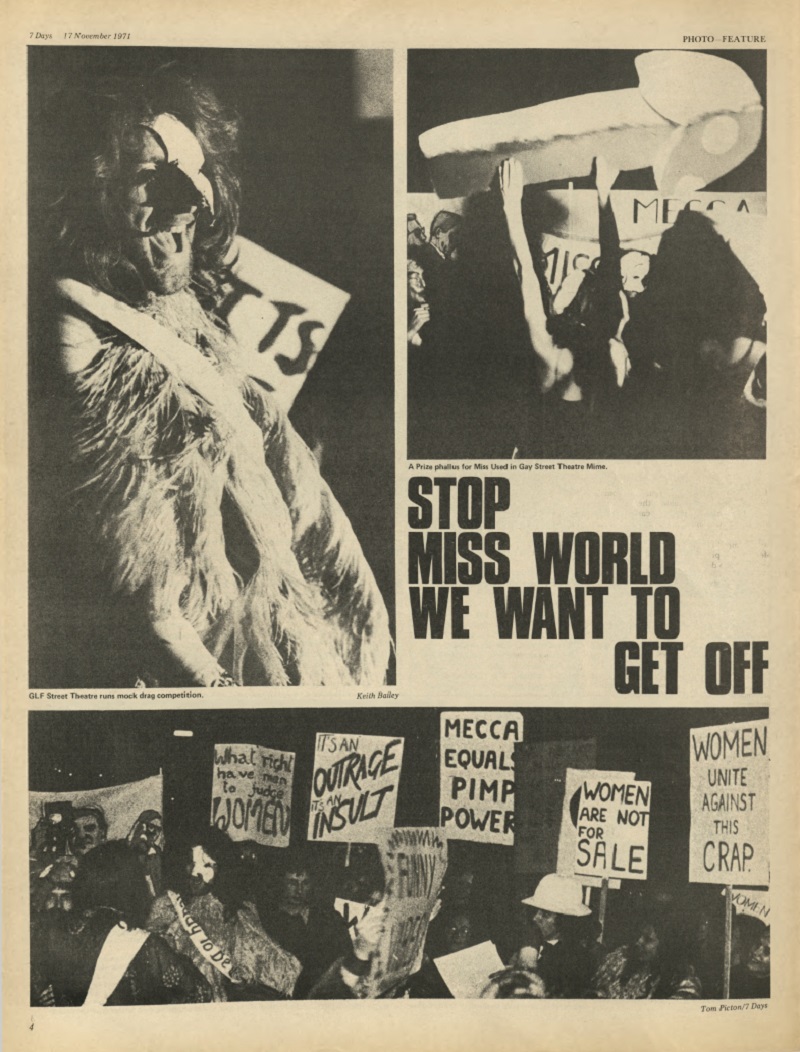 One person orchestrated the outcome across the pages of 7 Days, edited the layouts and presentation: Alexander Cockburn. I dislike the term ‘flair’, as I associate it with superficiality. But Alex’s flair was breath-taking in its audacity. Thanks to him, 7 Days focussed a tabloid energy on the British class system and its snobbery as well as world capitalism and its proto-fascism.

I’ll take a closer look at the first issue to show its range which was crucial to the paper’s qualities, building on Madeleine Davis’s analysis in her opening post. Page 2 reports the trial of the Mangrove 9 (recently brought back to life by Steve McQueen). The portraits of all nine were to fill a page when the historic 55 day trial ended. Rage against racism, in the UK and around the world, was a 7 Days theme from the start. Page 3 has reports on the European “Common Market”, the role of the City of London and a financial scandal in Italy. They initiated coverage of capitalism rather than ‘the economy (at the back, launching a weekly essay on concepts, Gareth Stedman Jones asks ‘What is Capitalism?’).

Two photo-stories give the paper its hard-hitting edge. One exposed a reunion of ex-SS Nazis in Bavaria and got the cover splash. The second is a dramatic account of how a British army unit provoked a riot in Northern Ireland. It is by the photographer, Tom Picton, who became a regular. It proved a harbinger of Bloody Sunday, which 7 Days covered like no other mainland paper. 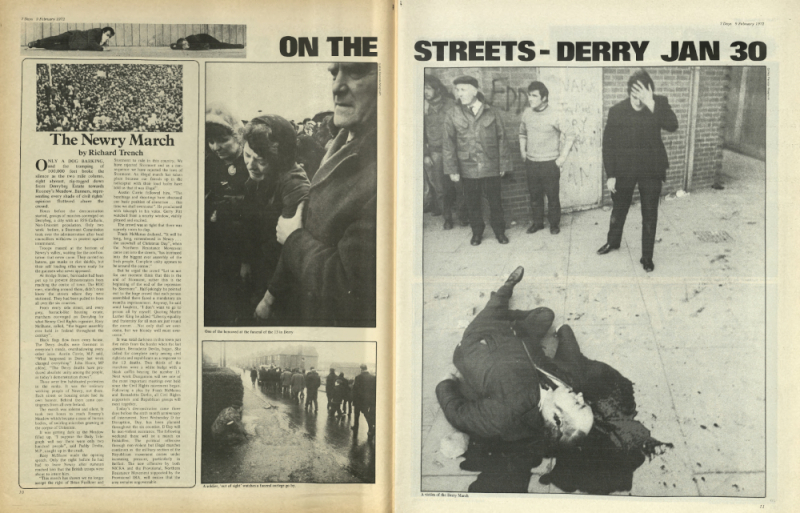 A striking report on a ‘Day at the Dogs’ by Peter Fuller, who was the indefatigable home affairs editor, launched coverage of sport with a strong working-class angle.

7 Days pioneered discussion of mental illness as a form of control and repression. In her cool, invaluable overview in the digitised archive, Rosalind Delmar, the paper’s production manager, captures the radical imperative to break the silence about this issue. A story on ‘Madness in Two Minds’ and one on ‘Inside Britain’s Psychiatric Prisons’ launched the coverage along with a provocation (by one of the editorial collective, John Hoyland under a pseudonym) about whether parents should make love in the presence of young children (answer, not if they sit on top of you).

The Labour Party features in a short article by Tom Nairn, ‘Has the Labour Party any new ideas?’ Tony Benn had published a Fabian Pamphlet that called on Labour to adopt workers control of production, referendums (there had yet to be one in the UK), direct action against the media and democratic education to replace elite rule. Nairn says it is absurd  to think Labour could just adopt such a “staggering” vision. He points out that in a subsequent Fabian Tract, Tony Crosland’s responded to Benn with a call for what Nairn saw as right wing-populism - a warning of what was to come. Nairn’s conclusion: “totally new” thinking would have to come from outside Labour. No one thought its source would be a Conservative of whom we had barely heard, Margaret Thatcher.

Turn the page and the nature of pop music and the role of musical charts is looked at by Dave Laing, while Stuart Hood (once the BBC Director of Programmes) writes on TV as an industry. Next there is Peter Wollen on the “Real, Surreal and Mundane”. In part he discusses how we mostly see paintings reproduced in a small format in books and this changes their nature. Opposite, a review of the ‘Advertisement of the Week’ is by John Mathews. Across all such coverage the new weekly focussed on the production of what is experienced and refused to take the output of capitalist society at face value.

In addition, Geoffrey Nowell-Smith contributed a superb review of Bertolucci’s The Conformist. He sets out how it resolved failures in his earlier films and shows how a bourgeois husband “is more fascist by his emptiness than anyone who is fascist by conviction”.

If this wasn’t enough, a four-page feature follows on gambling, its nature, scale and addictiveness and the role of the state by Jon Halliday, the brother of Fred Halliday, who was in charge of 7 Days' ‘Foreign News’, and Peter Fuller. 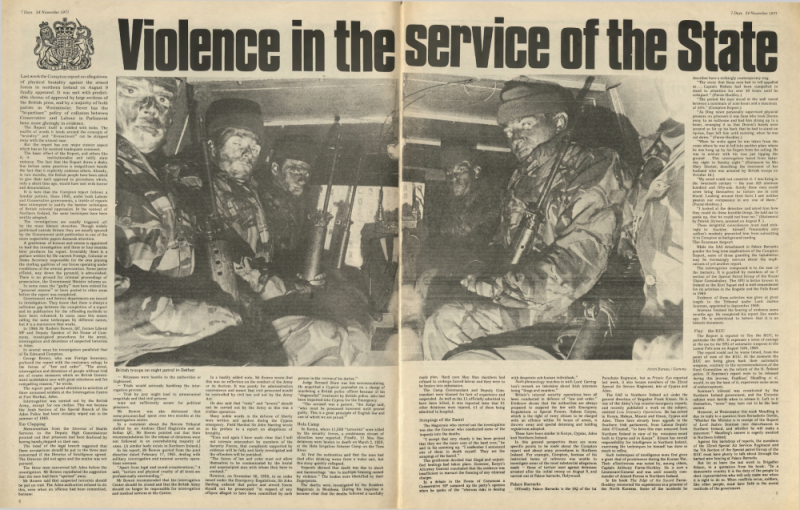 Later, Fred Halliday was to write a multi-page spread on why Nixon was going to China - one of the world-turning events that coincided with the six-month life of 7 Days. These included Bloody Sunday in Northern Ireland, when the paper ran the photographs others would not; the first miners’ strike that humiliated the Heath government; the trial of the Mangrove nine; the women’s liberation attack on the Miss World contest at the Albert Hall; the liberation of Bangladesh, and the huge, penultimate Vietnamese attack on the American regime in the South. It was the six months that launched the Seventies.

7 Days could have been an English language version of Libération, launched just over 18 months later in July 1973, or the Tageszeitung launched in 1978 - both  also started with egalitarian editorial collectives – and survived, even if, like them, it would have undergone the traumas of a triumphant market fundamentalism. A print publication needs in some way to be a ‘home’ for a core readership. 7 Days never had the time to build one. But the potential readership was there, later expressed by Rock against Racism and, in the early Eighties, with Ken Livingston’s inventive and effective Greater London Council (1981-86).

7 Days closed because it had no serious start-up funding. It was without capital in a capitalist world and lacked any core backers. But this itself needs explanation. I was the prime mover and fund-raiser, using a dummy we’d created as well as a business case. At the heart of it, all of us were attempting to by-pass the sectarian divisions of the English far-left by seeking to demonstrate what could be done by looking outwards. But this also meant there was no initial network of organised support in a highly sectarian situation. 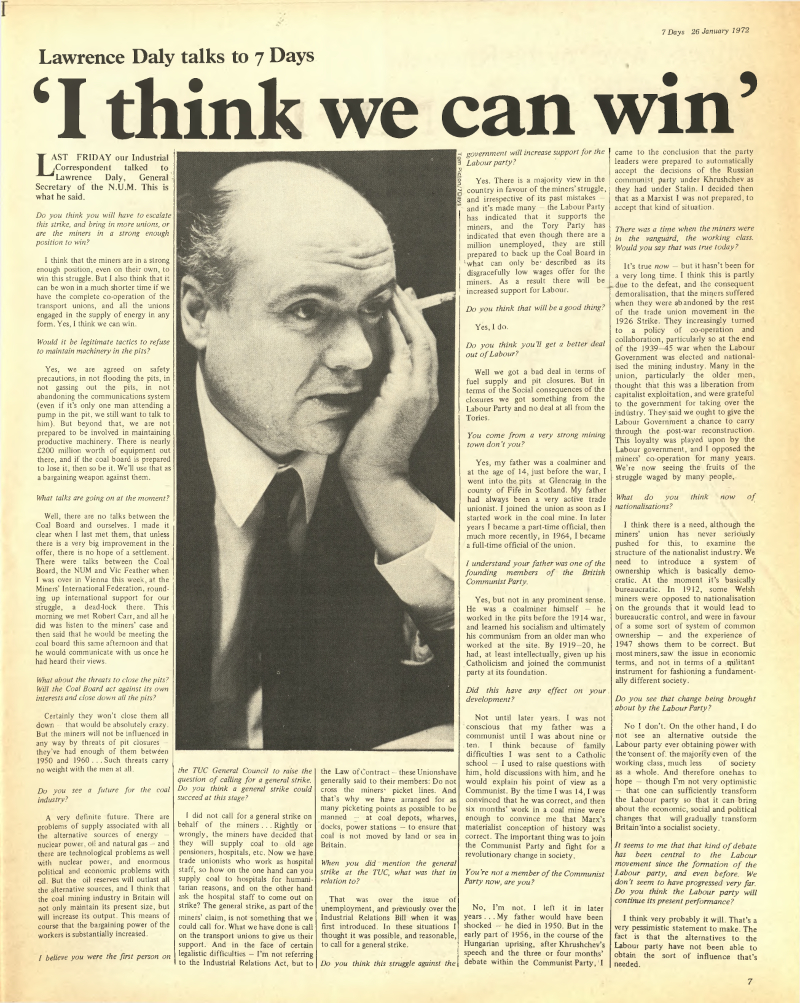 Specifically, it was an effort to recover from the wounding split in the Black Dwarf . 7 Days was what the Black Dwarf should have become. This sounds like an odd thing to say, I know! Black Dwarf was a revolutionary paper conjured into existence by the theatrical agent Clive Goodwin and the poet Christopher Logue and others, edited initially (after a false start) by Tariq Ali. I joined the Dwarf later. Among its other editors and contributors who were to work full-time on 7 Days were Fred Halliday (who delighted in the Dwarf’s  memorable front page banner: “We shall fight, we shall win, Paris, London, Rome, Berlin”), Peter Fuller, who wrote pseudonymously the Dwarf’s ‘City’ column and John Hoyland.

Tariq Ali became a committed Trotskyist and decided to help create the International Marxist Group (IMG), as a British branch of the Fourth International. Backed by like-minded Black Dwarfers (none of whom were writers), he urged Goodwin to make it the paper of the IMG and Goodwin refused. Ali had recruited a wealthy supporter and they split off to launch the Red Mole. I took over editing the Black Dwarf  but Goodwin had no funds and it died.

As it did so, some of us determined to start a new paper out of the ashes of the debacle, convinced that a committed non-sectarian paper of the left was needed. An example of the linkage: a key contributor to 7 Days was the great critic Peter Wollen, who wrote the Xmas cover story ‘Was Christ a Collaborator?’ I asked him why he wanted to become involved with us and not Red Mole. He said that it was when he saw one of the later Black Dwarf’s that I edited, where I’d put FOOTBALL FOOTBALL on the cover. Here is a characteristic picture from the time, with Margarita Jiménez. 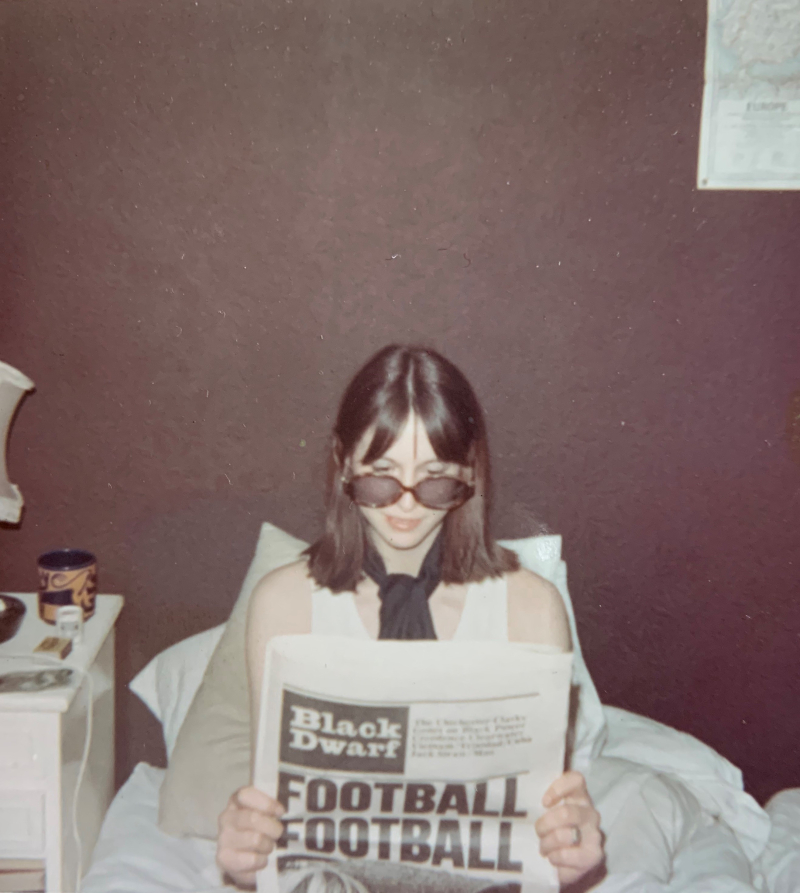 7 Days became a message in a bottle. One that recorded what the left’s culture and spirit should have been like. I’m very happy that Madeleine Davis’s eagle eye spotted the bottle and has opened it up half a century later.

Looking back I realise that for me personally it was a moment of uninhibited revolutionary expression. Much later I enjoyed bringing some radical energy into constitutional reform with Charter 88 – but it was consciously preconditional: a call to democratise the state sufficiently to make socialist strategy a credible option. Twelve years after that, the aim of openDemocracy was to create a space to prevent suffocation by Blairite globalisation. But 7 Days was an uninhibited ‘weapon’ of revolutionary advocacy, advance and learning, or so we thought!

How did it influence me? I felt vindicated as well as defeated. It meant my experience of that period was different from many of those who joined organisations like the IMG, the Socialist Workers Party (SWP), or even became Bennites. It was defeated but it deserved to have survived. I was greatly helped overcome the loss by gaining the friendship and mentorship of John Berger, whom we’d asked to become a ‘Trustee’ of 7 Days. He was a wonderful example of how to retain voice and principle even when times are dire.

I’d like to add one codicil. We were not helped by the state of England. In his article, Nairn quotes Tony Crosland, once the most interesting of Labour intellectuals. Now he denounced ‘participation’ and ‘liberation’. The British people, Crosland claimed, “prefer to lead a full family life and cultivate their gardens. And a good thing too … we do not want a busy bustling society in which everyone is politically active and fussing around in an interfering or responsible manner”. This still shocks. It expressed the deep conservatism of the political class and the revulsion shared by the Labour leadership of democracy itself. Unfortunately, at the time, far too many voters agreed. They had still to vomit up the loathsome elixir of fatalism, deference and belief in British superiority and this effected everyone. This helps explain why 7 Days was also like an oasis in a desert. 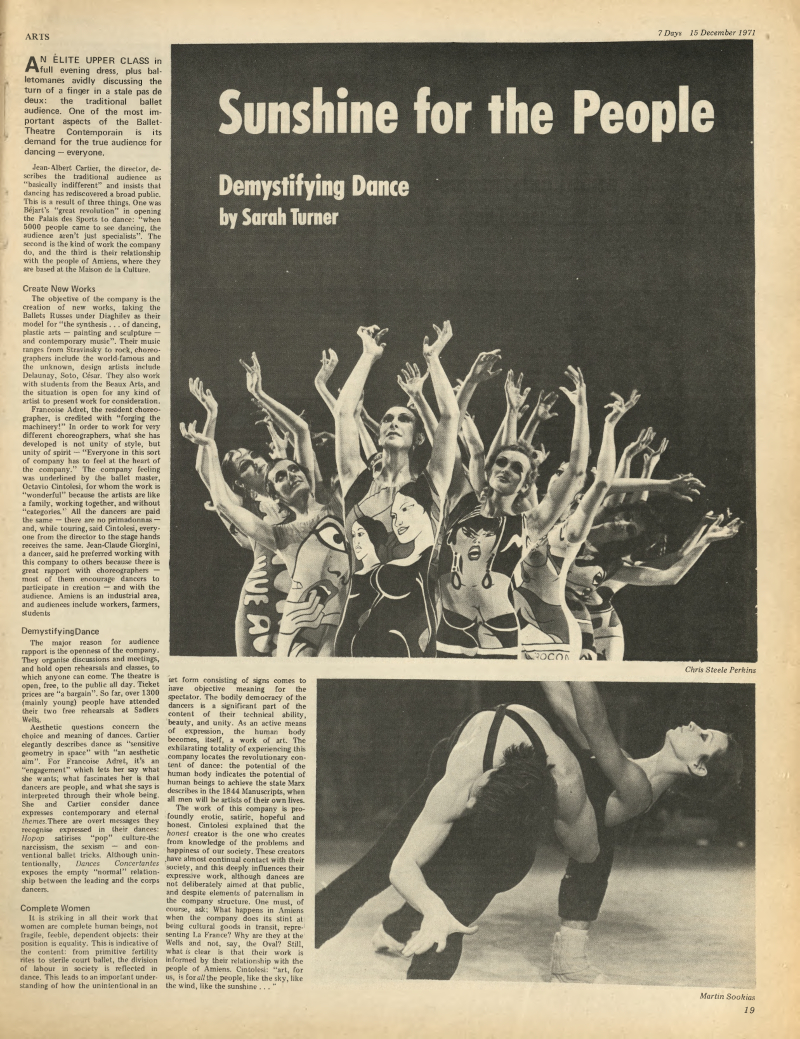 The spirit of 7 Days in this stunning layout. Credit: CC BY-NC 4.0 by 7 Days, Image courtesy of Amiel Melburn Trust Archive.