In 2020 the British Library acquired the papers of Anthony Barnett, best known as the founder of the campaigning organisation Charter 88 and the website openDemocracy. This series of six posts highlights a discrete part of the archive, consisting of published and unpublished material, editorial documents and ephemera from Barnett’s time as a member of the editorial collective of the revolutionary weekly newspaper '7 Days'.

In this third guest post, Graham Burchell recalls his role as industrial correspondent for '7 Days' and reflects on the industrial relations landscape of the early 1970s. (The second post in the series is here.)

Looking back on my experience on 7 Days, I find I am very surprised that I was ever invited to become the full time “industrial correspondent” for this New Left, revolutionary, but hopefully commercially viable, photo-news weekly. It now seems to me extraordinary. 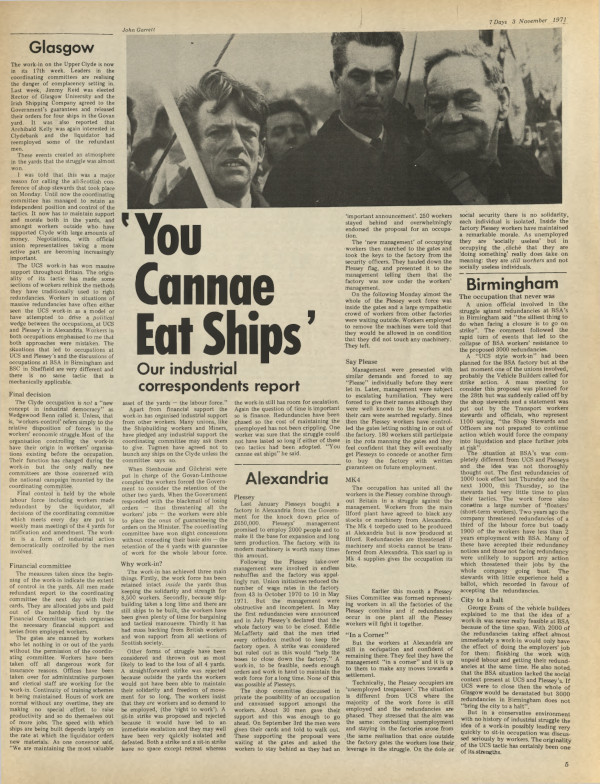 Apart from a brief experience of trade union activity, through involvement in an unsuccessful attempt to form a “breakaway” union of telecommunication workers, separating from the large postal workers union (UPW), I had no experience and little knowledge of the world of industry or trade unionism.  It was a brief experience-experiment:  the national postal strike of 1971 put an abrupt end to the plans of the new union, forcing its handful of members to choose either to join the UPW strike or become strike-breakers, “scabs”.  It also put an end to my trade union experience.

My involvement came about as a result of my decision to ‘boycott’ my final exams at university, abandon academic life, and philosophy, and throw in my lot – irrevocably, I imagined – with the working class and its struggle.  I became a trainee overseas telegraphist in the Post Office.  Anthony Barnett’s approach to me came after I had reconsidered this decision, left the Post Office, sat my finals, and rediscovered my interest in philosophy.

As well as my lack of experience and knowledge of industrial matters, of economic policy or trade unionism, I had no experience of journalism and the kind of investigative activity and writing it involved.  Moreover, I was temperamentally unsuited for the job:  24 years old, I was too self-conscious and too intimidated by the people I needed to interview to be able to approach them with any confidence or authority.  I was frequently in the office, not knowing what to do, and I recall Peter Fuller, in charge of Home news, and a real journalist, impatiently telling me that I should be “out there” getting stories. But I had very little idea of how to go about this.

Indeed, the high points of my experience on the paper – a visit to Glasgow to report on the Upper Clyde Shipbuilders’ “work-in”, to Coventry to interview engineering workers facing the prospect of unemployment and striking for the first time since the war, an eye-opening trip down a coal mine, an interview with the miners’ leader Lawrence Daly, and a journey to Kirby and Liverpool with the playwright John McGrath to report on a factory occupation – were all initiated and arranged for me by others.  On the trip to Liverpool, I was little more than John McGrath’s awestruck passenger observing how all the people we met in Liverpool – union organisers, shop stewards in the occupied plant, and everyone in the bar of the Everyman Theatre – seemed to know and greet him as a friend. 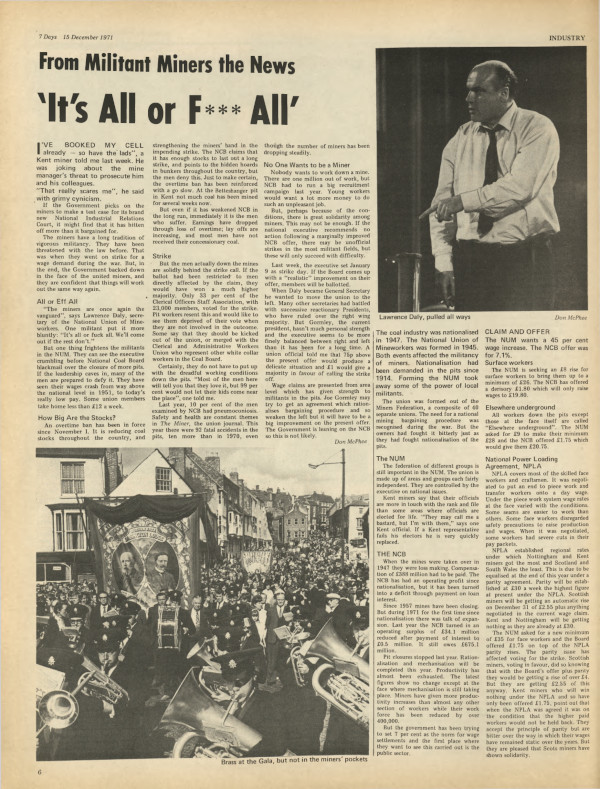 The term “industrial correspondent” is not used much today.  The social, political and economic landscape in which journalists with this title once operated – a world of major national industries, large national trade unions, and the quasi-corporatist “industrial relations” and economic management set ups which had governed the relations between employers, workers and national governments since the Second World War – has disappeared. 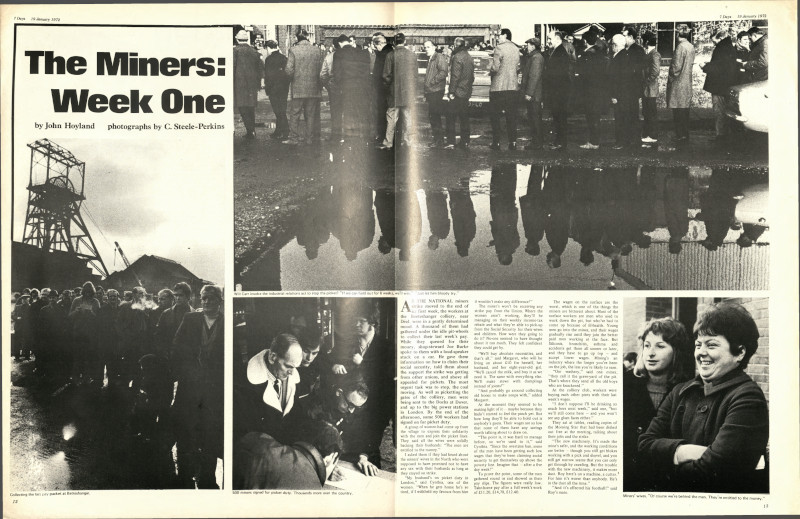 7 Days was launched in what we can perhaps now see was an important moment in the early stages of this transformation.  It was an imaginative venture, an attempt to get free from old models of a militant Left journalism tied to the policies and positions of a political organisation, to create something radical and independent that would speak to the new forces and movements we felt ourselves to be part of, even possibly to represent. But, despite our aspirations, perhaps we failed to identify what was in fact new in what was happening.  In 1970, Edward Heath’s Conservatives were elected on a radical ‘free market’ manifesto.  Harold Wilson derided the Conservative programme as the work of “Selsdon Man” (after the hotel in which the manifesto had been drafted).  He depicted it as the product of a kind of paleo-conservatism.  This set the tone for what became a persistent critical theme:  that the Conservative programme came from, and would take us back to, the past.  But maybe “Selsdon Man” was not a paleo-conservative relic, but something new, albeit perhaps still inchoate, foreshadowing the neoliberalism that would come to dominate the future?

In 1971, a record number of people were involved in “industrial disputes” and more days were “lost” through strikes than in any year since 1926.  The reform of “industrial relations” was at the heart of the Conservative government’s agenda. A new Industrial Relations Act, introduced quickly and coming into force in 1971, sought to shift the balance of power between employers and trade unions in favour of the former, on the one hand, and in favour of the power of official trade union leadership over shop-floor organisation and their ‘unofficial’ actions on the other.  At the same time it gave greater powers of intervention and sanction to the State. 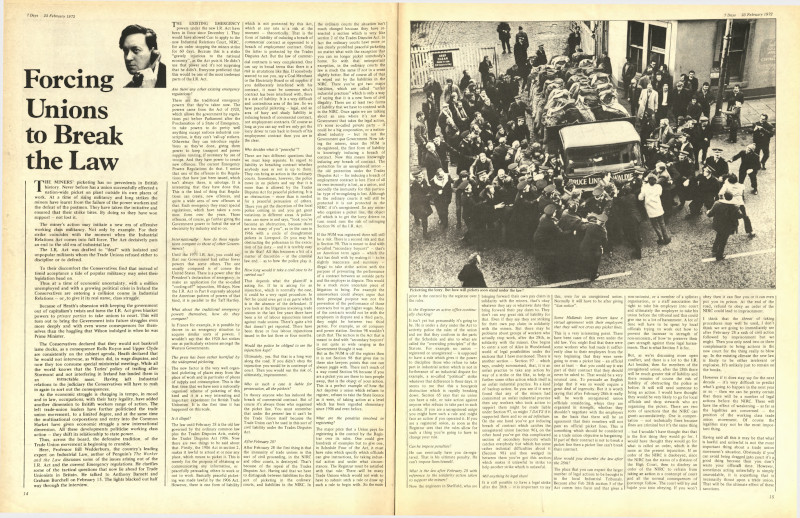 The first steps in the government’s attempt to dismantle the post-war tri-partite consultative arrangements inaugurated a long period of bitter and intense struggles.  When the first issue of 7 Days  appeared, the Upper Clyde work-in had been underway for a number of weeks, other kinds of factory occupations followed elsewhere, a battle between engineering workers and employers was brewing in Coventry, the first national miners’ strike since 1926 seemed likely, and the trade unions were gearing up their opposition to the provisions of the Industrial Relations Act. I had a great deal to learn, and it had to be learned ‘on the job’.  7 Days gave me the opportunity to meet and talk with some of the people engaged in these struggles – shipbuilders on the Clyde, engineering workers in Coventry, manufacturing workers in Kirby, miners in Kent – even if I may not have known how best to learn from them and remedy my ignorance.

In January 1972, under the headline “A Great Year for The Thirties”, I summed up 1971 as a “year of revivals”: “The traditions that hang like a fog around the British labour movement had their moment in a nostalgic resurrection of the Thirties”, I wrote.  While it was true that some trade union and Labour leaders, as well as many on the far Left, frequently evoked the past when describing Conservative policies – referring to a “class struggle” being “resurrected” by the Tories, for example – both headline and article failed to do justice to the reality of the struggles I reported on.  Moreover, they did not accurately represent what I myself had found and written about, which could not be reduced to this summary judgement. 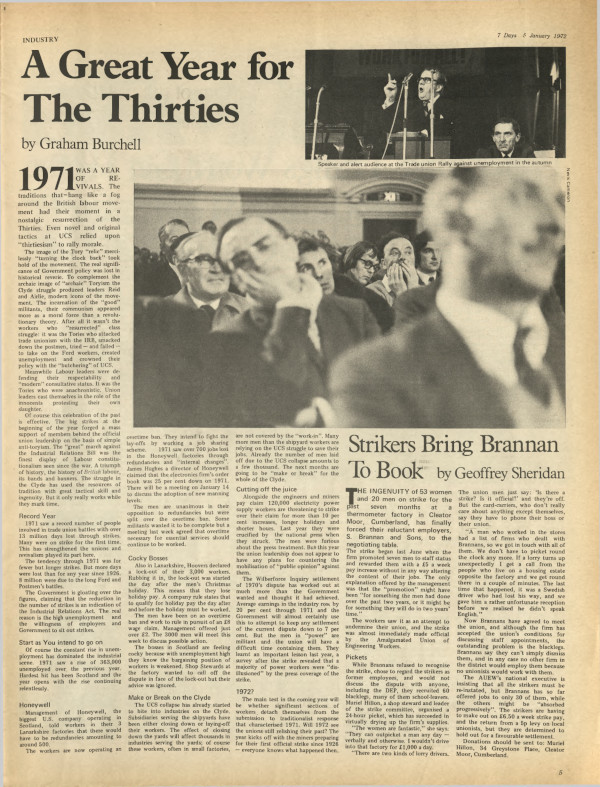 In my brief experience as a journalist, in the rapid background research I had to undertake and in meetings with those directly involved, I inevitably had to get to grips with the always specific features of the different struggles I had to describe and the ways in which the past was present and active within them.  Behind the grand historical references, the images and narratives evoking a deep continuity between past and present struggles, I quickly encountered a more messy history present in the form of agreements struck in the past, court judgements, laws, constitutions and rule books, traditional forms of working practices, divisions between different groups of workers, and so on, which shaped the various struggles and which I had to try to understand.

My article alluded to the familiar Marxist trope of experiencing the present through models, characters and images borrowed from the past:  the famous quotation from the opening lines of Marx’s The Eighteenth Brumaire of Louis Bonaparte.  But I was, of course, oblivious to the fact that my criticism applied equally, indeed with greater justification, to myself.  In an ‘Ideas’ piece, written a few weeks later, I summed up my strictures on the inevitable limits of the workers’ “economic struggle” by looking back to the Russian Revolution and invoking – resurrecting – the thoughts of Vladimir Ilyich Lenin as my authority!

“Industry” was, of course, only a small part of 7 Days, and it was far from central to the concerns and interests of the paper’s contributors and readership. My impression is that we thought we were living in an exciting and optimistic historical moment in which it was not unrealistic to think of ourselves as protagonists of a process of revolutionary change.  It may be that in looking for signs of the possible existence of a “revolutionary situation”, we failed to detect other powers knocking on the door.

I think it unlikely that the kind of politics 7 Days  wanted to promote and represent would have survived subsequent political-economic developments – the collapse of the Soviet empire and the inexorable rise of neoliberalism in particular – but it still seems to me a great shame that the ambitious project of a commercially viable independent, radical photo-news and ‘ideas’ weekly paper did not survive longer and have a chance to develop and change.