In 2020 the British Library acquired the papers of Anthony Barnett, best known as the founder of the campaigning organisation Charter 88 and the website openDemocracy. This series of six posts highlights a discrete part of the archive, consisting of published and unpublished material, editorial documents and ephemera from Barnett’s time as a member of the editorial collective of the revolutionary weekly newspaper '7 Days', 50 years on from its publication.

In this fourth guest post, Bill Mayblin recalls his role in the production and design of the paper and the shifting media and cultural landscape for newspaper publishing in the early 1970s. (The second post in the series, written by Anthony Barnett, is here, and the third post by Graham Burchell is here.)

In 1971 I was twenty three years old, which would have made me one of the younger and certainly one of the less noticeable members of the 7 Days editorial collective. I would be  surprised if many surviving members even remember me. But together with Alan Turkie, who was even younger (but perhaps more noticeable) we were the production team responsible for designing, pasting up and delivering the weekly edition of 7 Days for print. For my part I was thrilled to be part of something as exciting and worthwhile as this brave venture, but also slightly in awe of the fierce intellects and articulate egos that made up the rest of the collective. 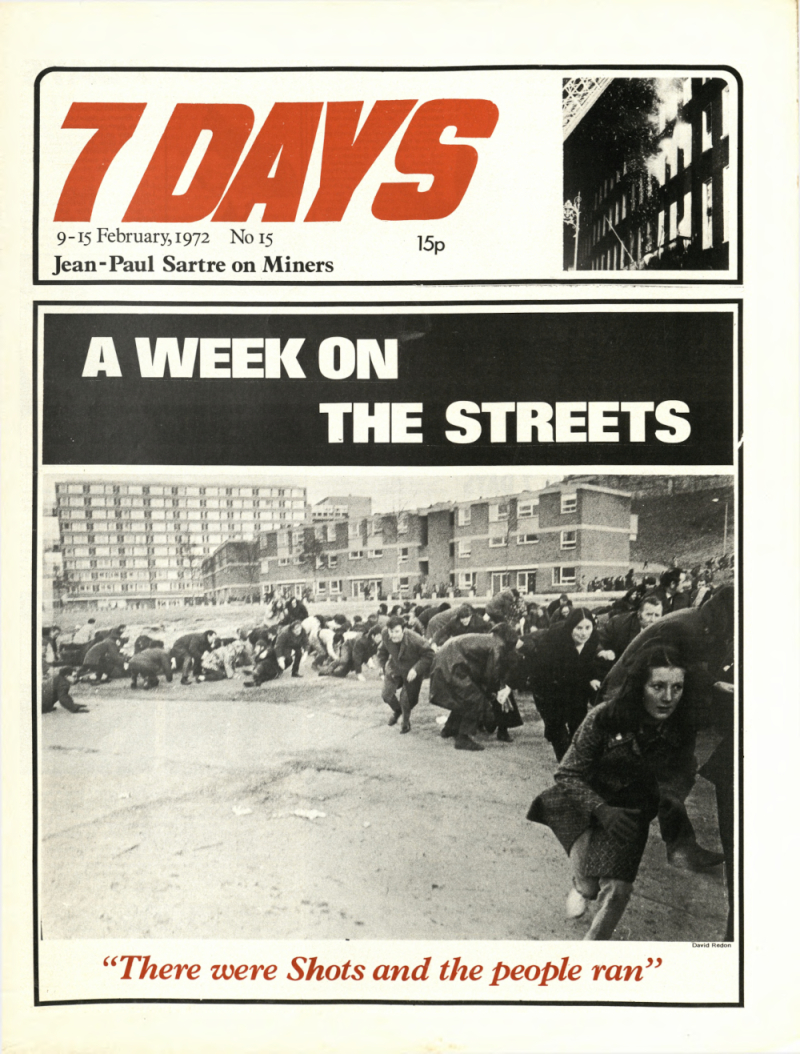 Cover of the 9th February 1972 issue which dealt with the events and the aftermath of the Bloody Sunday massacre in Derry, using photographs to powerful effect. Credit: CC BY-NC 4.0 by 7 Days, Image courtesy of Amiel Melburn Trust Archive.

Design is perhaps too grand a word to describe my role on the paper. All basic design decisions – grid, fonts, masthead – had already been taken before I joined. Layout and paste-up would be more accurate to describe my job and this involved cutting up photoset galleys of type, laying out the page and pasting copy onto grid sheets with Cow Gum – the standard technology of the day for offset litho printing.

Photographs we would mark up separately for the printer to size, screen and drop in. Every Tuesday would see a marathon all-night session to put the issue together in the cramped offices in Shaver’s Place, SW1. And on Wednesday morning one of us, tired and bleary-eyed, would take the train to Colchester to deliver the artwork to the printer.

My overriding memory of those all-night sessions is of fighting for space – space on the page, that is – in order to use photographs large and to have sufficient ‘air’ around the typography. It was often a losing battle. There was always too much copy. ‘Alex, we need to lose thirty lines here.’ would be a recurring refrain. Alex Cockburn, our calm and indefatigable editor would pore over the galleys and cut what he could, but inevitably pages would often look as if text and photos had been squeezed in with a shoehorn.

The truth is that 7 Days was never a design-led publication, members of the collective were far too politically focused for that. I don’t remember a single meeting at which the paper’s design was specifically or seriously discussed. Whatever design ethos it did have was already embedded at the very genesis of the project. 7 Days was to be a tabloid format, 24 page paper that embraced the documentary power of photography.

When talking of the paper with people at the time I would habitually describe it as a ‘leftwing photo-journalistic weekly’. Only now as I write that down, fifty years on, does it occur to me how strangely old-fashioned this description feels today. Three words that still have perfect currency on their own, but together seem to belong to a distinctive period of 20th century history that was perhaps already coming to an end when 7 Days was launched.

It’s the photo-journalism bit that dates it. With the sheer saturation of photographic and video images in today’s mainstream and social media we can forget just how novel and powerful documentary photography was for much of the last century. From the 1920s onwards modernist graphic design had championed photography, with its promise of objectivity and truth, as the prime if not the only ‘modern’ way of making images. The photo-journalist was born and it was the black-and-white photograph, often radical, dramatic and shocking that gave us our memorable images of the world through peace and war.

Growing up in the nineteen fifties and sixties I can remember the impact of publications like Life, Paris Match and Britain’s own Picture Post (a conscious model for 7 Days), and in the late sixties the Sunday broadsheet supplements, particularly the Sunday Times under the influence of art editor David King, brought us powerful photo essays such as Don McCullin’s images of the Vietnam war. It was this tradition that 7 Days was proudly stepping into.

But times were changing, and art and graphic design are perhaps where it could be seen first, and most clearly. The sixties had also given us psychedelia, pop art and the counter culture. If we talk of modernism we must also acknowledge the beginnings of postmodernism, a rejection of ‘Truth’ and of the photograph as its embodiment, and an embrace of complexity, playfulness and irreverence.

A memory stands out for me here. Alan and I were working to lay out pages for the week’s issue and someone brought in the latest issue of OZ magazine. We flicked through it, slightly sniffy but also fascinated at its chaotic energy full of radical free-standing artwork, vaguely pornographic cartoons, whole articles printed in yellow type reversed out of a pink background (totally illegible – tut-tut). And yet exciting and in tune with a particular zeitgeist.

It was not our target readership of course and although it was clearly anti-establishment and loosely in our camp we could chuckle dismissively at its outlandish graphics. And yet there was always the nagging feeling that at some cultural level this was what our paper was now competing with for readers. In 1971 even before computers and the internet our media and cultural landscape was shifting and 7 Days was perhaps stranded on one particular shore. 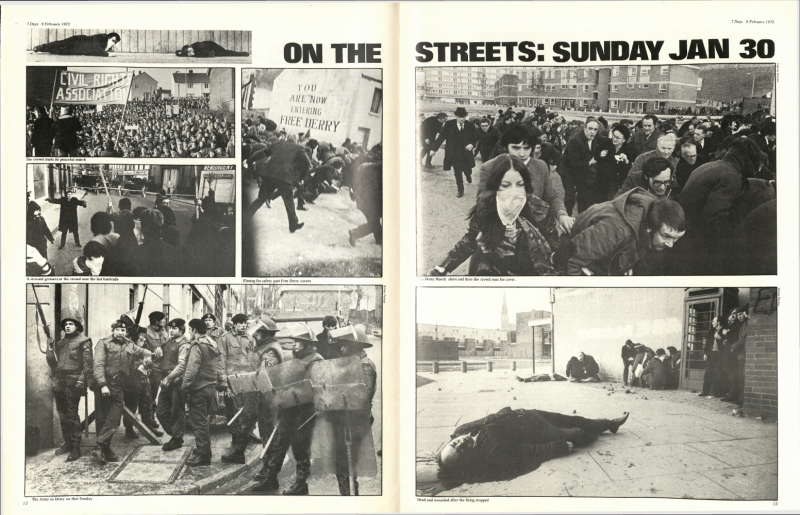 Inside page from the 9th February 1972 issue focusing on the events and the aftermath of the Bloody Sunday massacre in Derry. Credit: CC BY-NC 4.0 by 7 Days, Image courtesy of Amiel Melburn Trust Archive.

Looking back on 7 Days’  brief existence I am amazed and proud at the breadth and depth of its coverage through a tumultuous time of home and global politics. The sweep and standard of its journalism, in words and images, was high. But as one of its design team I feel entitled to admit that its ‘look’ was not always so good. There were many pages, with cramped type and wonky sub heads, that make me wince when I see them now. But there were also occasions when we won the battle for space, and designed memorable spreads, pages that sit more proudly in that modernist tradition of photo-journalism.

Sadly in the spring of 1972 7 Days produced its final issue and a talented group of people went their separate ways. As for me, I went on to design numerous other publications many of which I am more proud of from a simple design point of view. But I have to admit they tend now to merge together in my memory. But 7 Days, that six months in 1971-2, working through the night in Soho with Alex Cockburn, Alan Turkie, (my close friend to this day) and assorted members of the collective who would drop by to discuss, argue and generally get in the way – that was something special.