7 Days - Back then and now: a personal recollection by John Mathews

In 2020 the British Library acquired the papers of Anthony Barnett, best known as the founder of the campaigning organisation Charter 88 and the website openDemocracy. This series of six posts highlights a discrete part of the archive, consisting of documents and ephemera from Barnett’s time as a member of the collective behind the revolutionary weekly newspaper '7 Days', 50 years on from its publication.

In this fifth guest post, John Mathews recalls how he came to be part of the collective and considers the impact 7 Days had, for himself and others involved. (The second post in the series was written by Anthony Barnett, the third post was by Graham Burchell, and the fourth post by Bill Mayblin.)

In October 1971, when the first issue of 7 Days appeared, I was 25 years old, a young Australian who had been recruited to the newspaper’s collective by Anthony Barnett, then the editor of Black Dwarf. I had been travelling the world (Indonesia, Thailand, India) and had arrived in London a couple of years earlier, at the end of 1969, full of plans to make my mark in the great metropolis.

The way I did this (it is scarcely credible today) was to use my last hundred pounds to launch a film magazine, which in the irreverent style of the day I called Cinemantics – focused on the work of ‘New Cinema’ directors like Glauber Rocha and Jean-Marie Straub as well as emerging semiotic/semantic theories of cinema like Pasolini’s ‘grammar of film’. I had a background in cinema – having been President of the Melbourne University Film Society in my undergrad days – and simply wrote a couple of paragraphs as a manifesto and then went around asking people already writing on the new language of the cinema if they wanted to contribute. Enough of them – including Peter Wollen then working at the BFI – said yes, and the magazine was off. Favourable reviews by Dilys Powell in the Sunday Times helped, and my film reviews also attracted the attention of Anthony at Black Dwarf, and so I found myself drawn into a circle of New Left personalities.

When Anthony asked me in early 1971 whether I would like to join the group planning the launch of a new radical weekly, I jumped at the chance. I had no competing commitments (typical of the time) and saw the issuing of a regular revolutionary masthead as a blow against capitalism. I threw myself into the debates that then dominated our horizons, including how to raise the capital that we estimated would be needed to launch the paper. I participated in some of the fund raising and so earned my stripes as a full member of the collective.

As it turned out, our capital only lasted for the production of 21 issues of the paper, of 24 pages each (from 27 October 1971 to 22 March 1972) – the full set of issues is now available at the 7 Days online archive. We had the choice of stretching our meagre capital out by reducing our page numbers or print run but we never entertained such a possibility – we were too wedded to our own inimitable style of photo journalism, and for publishing ideas and exposes at length.

Those few months producing the paper stand out as a highlight of my youthful years to that point. Our collective boasted such stars as Alex Cockburn as the innovative and indefatigable editor; Anthony as roving ‘special reports’ editor, and Rosalind Delmar as production editor, holding it all together. Judith Ferguson and I fulfilled a floating ‘research/reports’ function. As such we would deal with the guardians of ‘desks’ like home affairs, foreign affairs, arts, life and special sections like ‘capitalism’ and ‘ideas’. 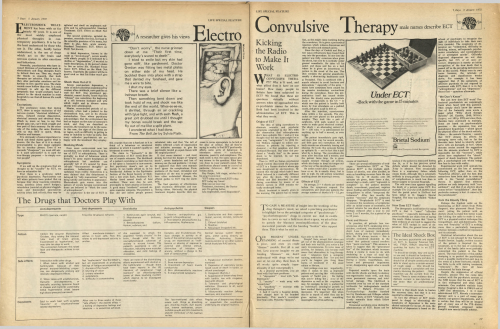 Some of the memorable features I was involved in on 7 Days were the expose of the cruel practice of ECT (electro convulsive therapy) in mental health treatment; (#10, Jan 1972), the narrative of the trial and sentencing of Jake Prescott and Ian Purdie (co-authored with Judith Ferguson #7, 8 Dec 1971) accused in connection with a bombing campaign carried out by the Angry Brigade; and an expose of the phoney psychology that claimed to support cosmetics manufacturers – a story headlined ‘Making Up Psychology’ that I thought was one of our better efforts. 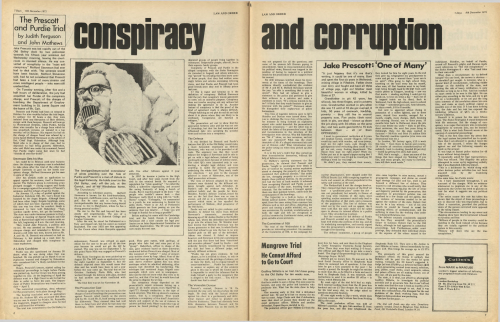 My own favourite contributions were my columns on the Advertisement of the Week, where I provided mock reviews of advertisements like the White Horse whisky ads (‘You can take a White Horse anywhere’) or Parkinson Cowan cookers running on North Sea gas (‘The cooker that rises from the sea’) treating them as examples of high bourgeois art with a capitalist twist. I was quite pleased with these efforts at cultural critique – and even had the dubious honour of finding my work sometimes memorialized in the ‘Pseuds’ Corner’ section of Private Eye.

It came as a huge disappointment when we published our final issue #21, on 22 March – followed by a further ‘final’ effort to revive the paper with a special issue on Vietnam in May, ‘Who’s for the chopper?’. The expectation we all shared was that the launch of the paper would generate such excitement and growth in readership that it would start to cover its costs and eventually become a profitable and radical, uncompromising journal of ideas and reportage (with its own slant on photo journalism, ably expounded by Bill Mayblin in an earlier contribution to this series of blogs). This was not pie in the sky – after all, it was how media barons like Rupert Murdoch operated, creating media titles that would pay for themselves as their market reach grew. But there wasn’t time for that to happen in the case of 7 Days.

After the paper folded, Anthony had to pick up the pieces and we all went our separate ways. Some of us pursued illustrious careers, like Alex Cockburn who ended up as a leading columnist in the US writing each week for the Village Voice (and blazing a trail that would later be followed by Christopher Hitchens). Our home affairs editor Peter Fuller dived deep into art criticism; our ‘ideas’ correspondent Peter Wollen took up academic film studies and wrote several film scripts; our foreign affairs editor Fred Halliday eventually took a chair in international relations at the LSE.

After the collapse of 7 Days, I dabbled in freelance journalism, securing a commission from the Sunday Times Insight team to adapt a story we had carried in 7 Days on illegal cash-in-hand contract work known as “The Lump”. I also engaged in some serious translation work, taking key texts from French and Italian and presenting them to the English-speaking world. And actually I was pretty good. My translation of some of the political writings of Jean-Paul Sartre (published as Between Existentialism and Marxism, NLB 1974) attracted a highly favourable review in the Times Literary Supplement. And I had the experience of translating the early political writings of the Italian Marxist, Antonio Gramsci, published by Lawrence & Wishart as Selections from Political Writings, 1910-1920, edited by Quintin Hoare. This gave me a lifelong admiration for Gramsci and a sensitivity to his capacity to ride the political wave in the Turin of these years, then the birthplace of Italy’s automotive industry and FIAT (the acronym formed from Fabbrica Italiana di Automobili di Torino) as well as of the Italian Communist Party.

But I elected not to pursue these freelance possibilities and instead turned to full time degree-crunching, at the LSE and Imperial College, culminating in my securing a PhD from Imperial College in cybernetics. I pursued the PhD as a ticket of entry into the great debates raging at the time – energy, nuclear power, ecology. I have enjoyed a varied career using my doctoral qualifications ever since. But it was the collapse of 7 Days that lit a fire under me and drove me to get some serious qualifications and take serious career steps. I then worked for the white collar union ASTMS as (I believe) the first PhD to work full-time for a union in the UK, helping the white-collar membership develop policies on prevention of occupational diseases like cancer. It was stimulating and thrilling work – and perhaps the ‘we can do anything’ attitude that we all shared on the 7 Dayscollective was a material advantage for me in meeting these subsequent challenges. I returned to Australia in 1979, to take up a similar role at the Australian Council of Trade Unions (ACTU), helping to contribute to the ban on nuclear power that still holds in Australia. There followed a stint working in the state Labor government of Victoria, before shifting to the university sector and taking a chair in business strategy at Macquarie University in the year 2000. Thus is a career generated from unlikely beginnings. 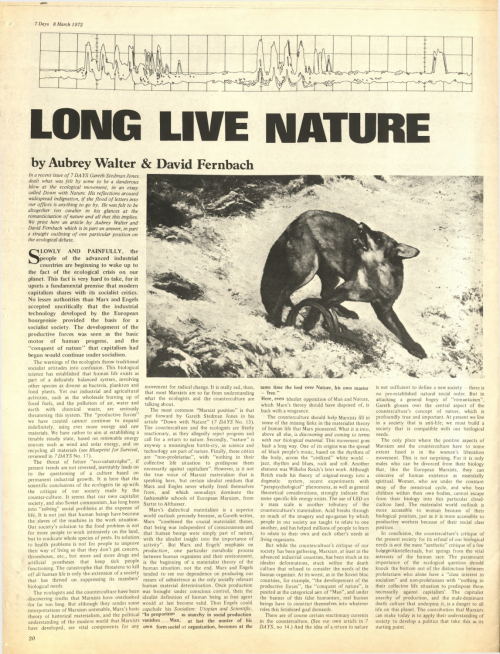 Going back to the issues of 7 Days I am delighted to rediscover that we ran one of the first and most credible debates over capitalism and ecology. Historian Gareth Stedman-Jones threw an intellectual grenade with a critique of the ecological left (‘Down with Nature’ – by which he meant an end to the romanticism of nature worship). This attracted a robust response from David Fernbach and Aubrey Walter in the next issue: ‘Long live nature’ which is still more or less the position of the Greens and the ecological left (7 Days #19, 8 March 1972) as of any sane commentator on prospects for curbing global warming. It is a delight to see how these debates foretold my own more recent work on The Greening of Capitalism (2015) and Global Green Shift (2017). So our efforts on 7 Days continue to resonate.