7 Days, Culture and the Arts

In 2020 the British Library acquired the papers of Anthony Barnett, best known as the founder of the campaigning organisation Charter 88 and the website openDemocracy. This series of six posts highlights a discrete part of the archive, consisting of documents and ephemera from Barnett’s time as a member of the collective behind the revolutionary weekly newspaper '7 Days'.

Fifty years ago, on 22 March 1972, '7 Days' published an emergency issue that saw it go into ‘suspended animation’. Funds were sought for a relaunch but, apart from a special issue in May 1972 to commemorate the withdrawal of US troops from Vietnam, the paper disappeared. In this sixth and final post in our series, Maxine Molyneux recalls her time as Arts and Culture Editor and reflects on a unique experiment in cultural politics.

(The second post in the series was written by Anthony Barnett, the third post was by Graham Burchell, the fourth post by Bill Mayblin and the fifth by John Mathews.) 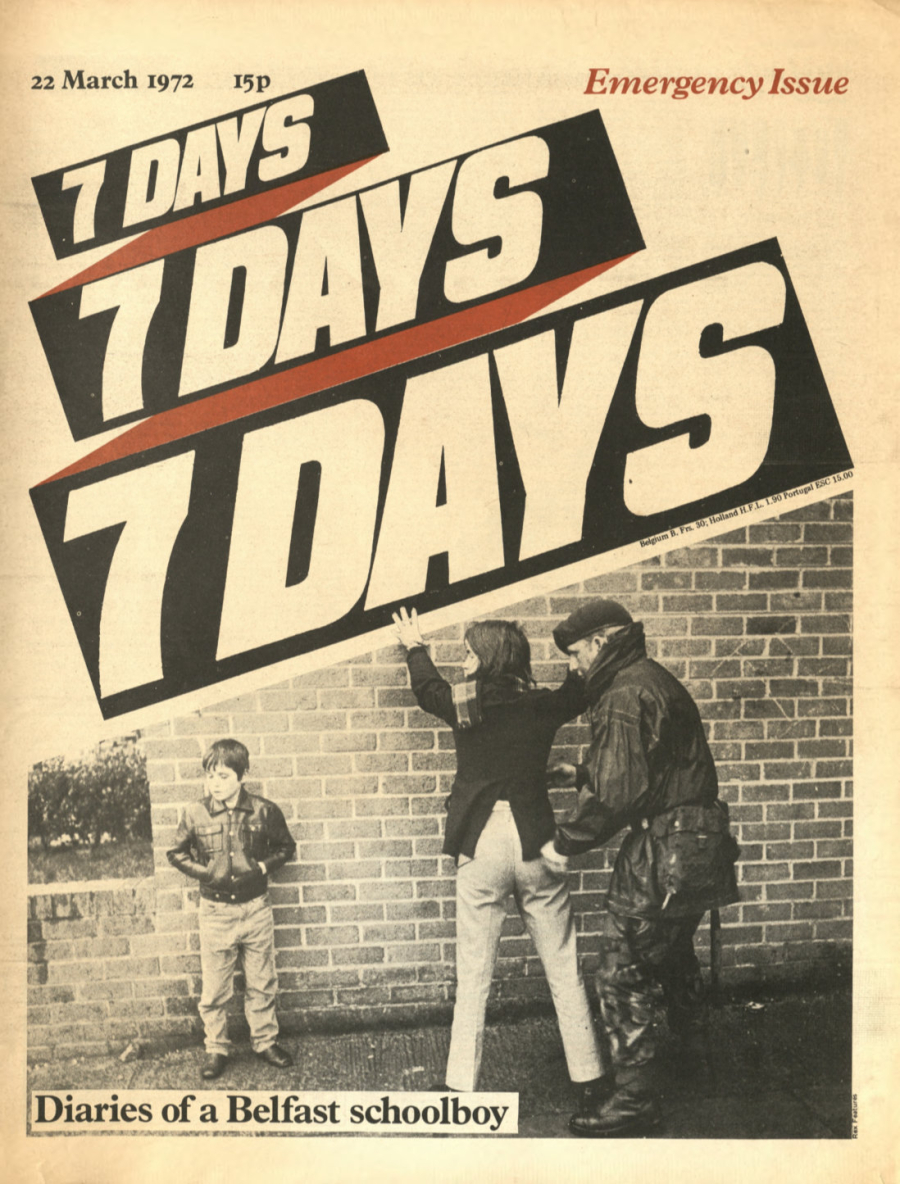 Not long before the launch of the first issue I was invited by the 7 Days collective to take on the job of Arts and Culture Editor. At the time, I was stitching together a living as a freelance journalist, writing articles here and there, doing part-time editing and translation jobs and writing PR leaflets on art shows for the amusingly titled Tomorrow’s News. I was lucky to have a regular commission for the International Herald Tribune to cover exhibitions and fine art auctions, and write the odd feature and book review, for which I was paid $12 a piece, almost covering my weekly rent.

In 1971, London’s cultural scene was alive with radical groups of artists, film makers and playwrights who were part of the broader political ferment, not only of the student movement but of a generation. At various times in that transitory world I had found myself sharing houses and flats with activists and artists, one time with the founders of the Red Ladder agitprop theatre group, another with one of the leaders of the radical film activist group, Cinema Action. There was a feeling of excitement, of innovation about, but there was also an intellectual appetite for the radical cultural moments and thinkers of the past, whether in drama, art or film.

Young activists debated the work of Brecht and Eisenstein, read Freud and Lacan as well as Marx, Mao and Lenin. I recall attending a very serious weekly (or was it fortnightly?) - Theoretical Practice group [1] run by Kasim Kahn from his flat in Finsbury Park. We travelled up by car, me, the feminist artist Mary Kelly, and Clive Goodwin (our driver), literary agent and founder of the Black Dwarf. There, in our group of seven, we pored over passages of Althusser, Balibar, Pierre Phillipe Rey and learned that The Grundrisse marked a distinct break in Marx’s thinking.

My life then was lived in contrasting spaces – private views in the old art world’s Bond Street galleries – and the fringe world of art activism, politics and theory groups, and they would often collide. I remember being at some private view held at the Royal Academy when a group calling themselves ‘the Black Hand Gang’ let off a small smoke bomb leading to a dramatic evacuation of the assembled guests. Agitprop cinema and theatre, fringe performance and avante garde music, and some madness too – all were part of the wave of creative energy and radical politics of that time.

What was compelling about 7 Days was that it was a project of the independent Marxist left, and was fully committed to serious and critical coverage of culture. I was ready for a change, and without hesitation I accepted their offer and took the post of Arts Editor for the brief life of the paper. 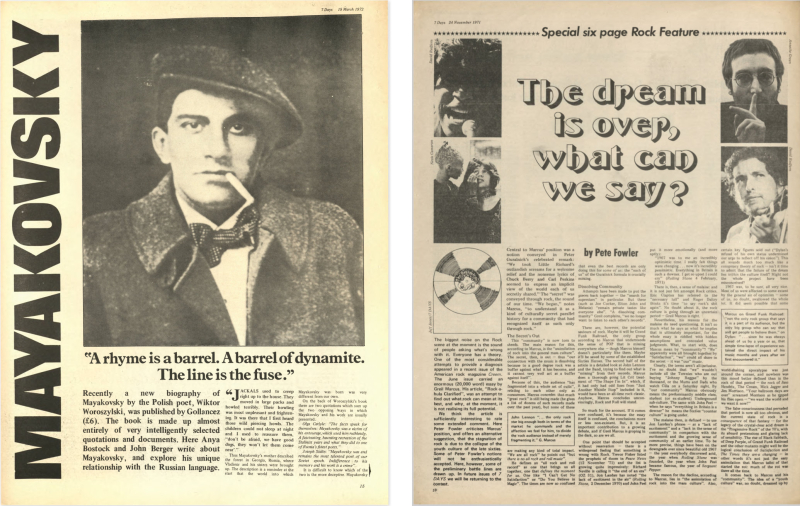 I knew some members of the collective if not personally then by name. I had met Peter Fuller in his art critic days at an ICA exhibition of Picasso’s Minotaur prints which we were both covering, and got to know him as a friend. I had also met Fred Halliday earlier at the offices of Black Dwarf, on my return from a work trip to Argentina, and was serving as interpreter for some Latin American revolutionaries who were on a European fundraising tour. When Fred and I met again in 7 Days we ended up sharing a tiny office with grimy red lino, and freezing, but for a bar heater which my co-occupant would stand in front of to warm up while the backs of his trousers slowly burned ever larger holes. No one cared much about their threads on the 7 Days collective.

Reviewing the 21 issues of the paper half a century later I am struck by the breadth and depth of its cultural coverage. 7 Days aimed to transform what it saw as the regressive tropes contained in ‘British values’, racism, sexism, philistinism, homophobia and elitism among them. 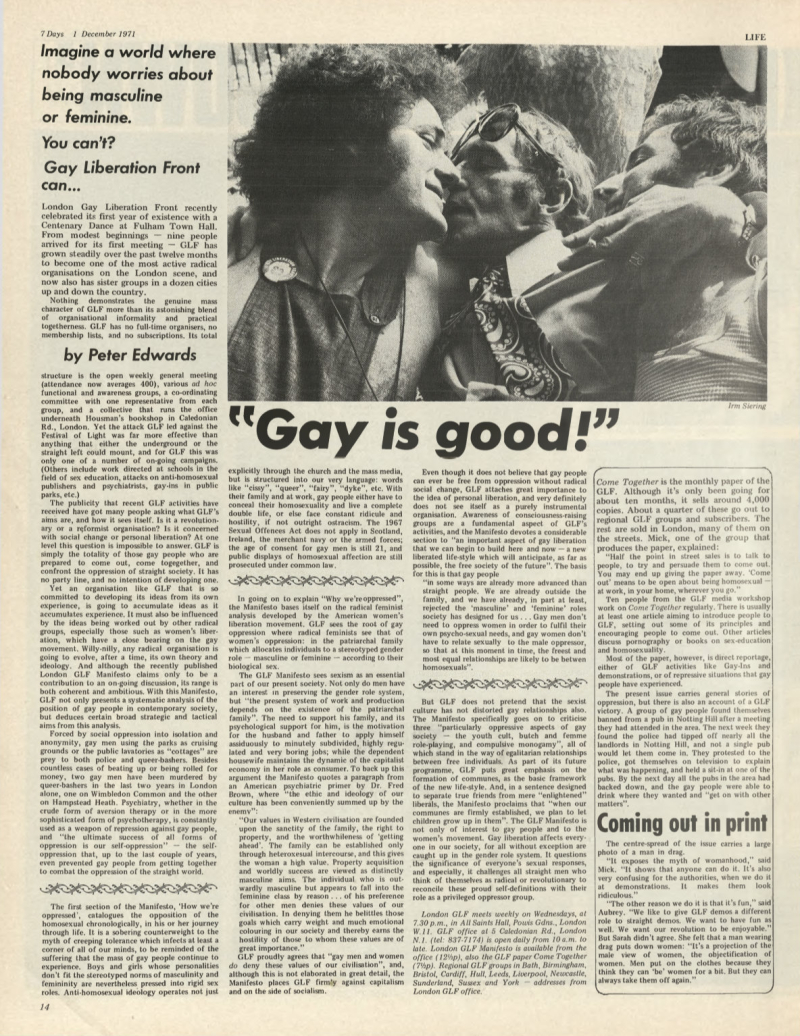 The first year of the gay liberation movement’s existence celebrated in 7 Days with a discussion of the London GLF group’s manifesto. Credit: CC BY-NC 4.0 by 7 Days, Image courtesy of Amiel Melburn Trust Archive.

More ‘Gramsci than Guevara” it was a platform for feminist ideas, and it was committed to anti-racist struggles and cultural interventions. In its arts coverage in particular it sought to create a bridge between high culture and popular culture. Short articles were accompanied by longer think pieces, underground and radical manifestos, analyses of advertisements, reviews of books like One Day in the life of Ivan Denisovitch. Thanks to being able to draw on a pool of talented writers sympathetic to 7 Days, there was no difficulty in finding a diversity of cultural content. Peter Wollen (aka Lucien Rey) on Realism, John Berger and Anya Bostock on a biography of Mayakovsky, but also a ‘Rock Special’ which included an interview with Jack Bruce ‘Life with Cream” and an appreciation of Miles Davis. 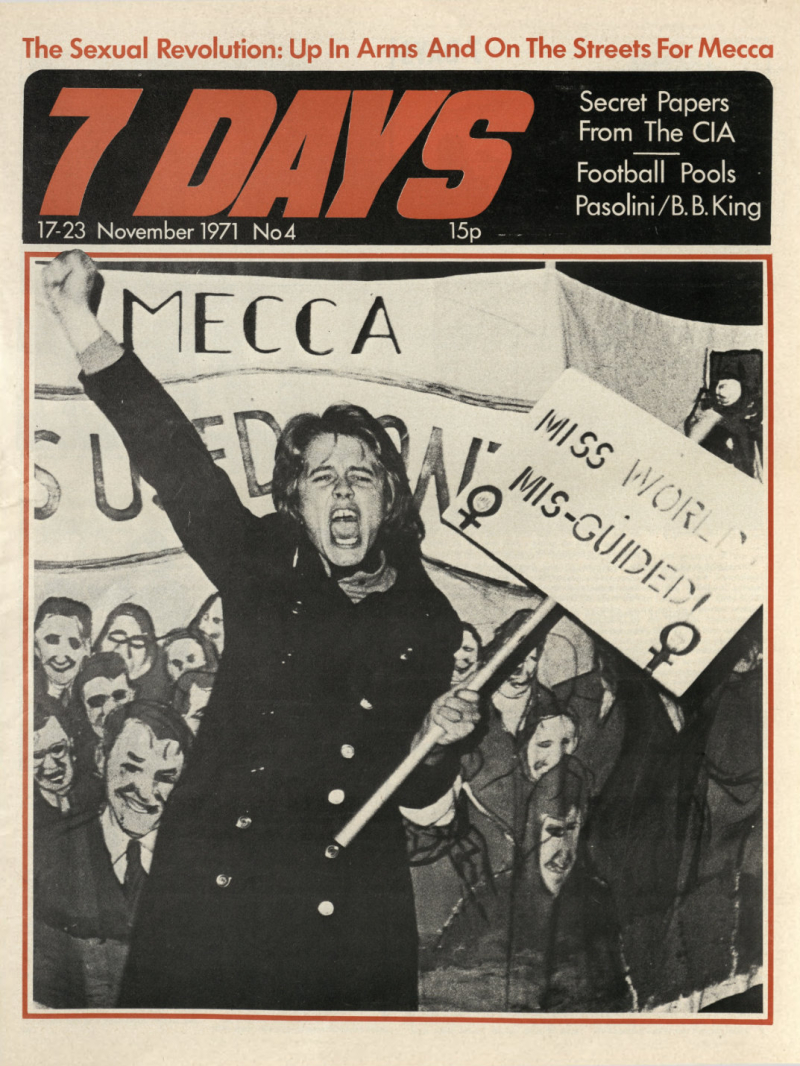 By today’s standard 7 Days was neither egalitarian nor inclusive in its internal relations.

As Rosie Van de Beek observes, the collective was made up of ‘insiders and outsiders’. Nor was it as inclusive in its coverage – notably of Black artists and writers - as it would be today. A piece on Mustafa Matura’s play As Time Goes By was perhaps the exception.

Yet feminist content there was aplenty, thanks largely to the women in and around the collective. Articles included ‘A bash at Women’s Hour’; a review by Sally Beauman of Cosmopolitan, flagged up as ‘an odious new magazine for women’, a critical discussion of the Playboy exhibition, a special feature on Miss World and Mecca, a photo feature on what was described in somewhat patronising language as a ‘ large and satisfactory demonstration’ that ‘took place outside the Albert Hall’. This, along with critical coverage of vaginal deodorants - symptomatic of capitalism - a report on a revolt by members of the BFI against the governors, pieces on Surrealism, a Hogarth show, and Kathleen Tynan interviewing Germaine Greer on the publication of The Female Eunuch. Positive appraisals of Alexandra Kollontai and an extended interview with Simone de Beauvoir by Rosalind Delmar, and pieces by Laura Mulvey and Mary Kelly, brought feminist analysis and politics into art theory, film and popular music. 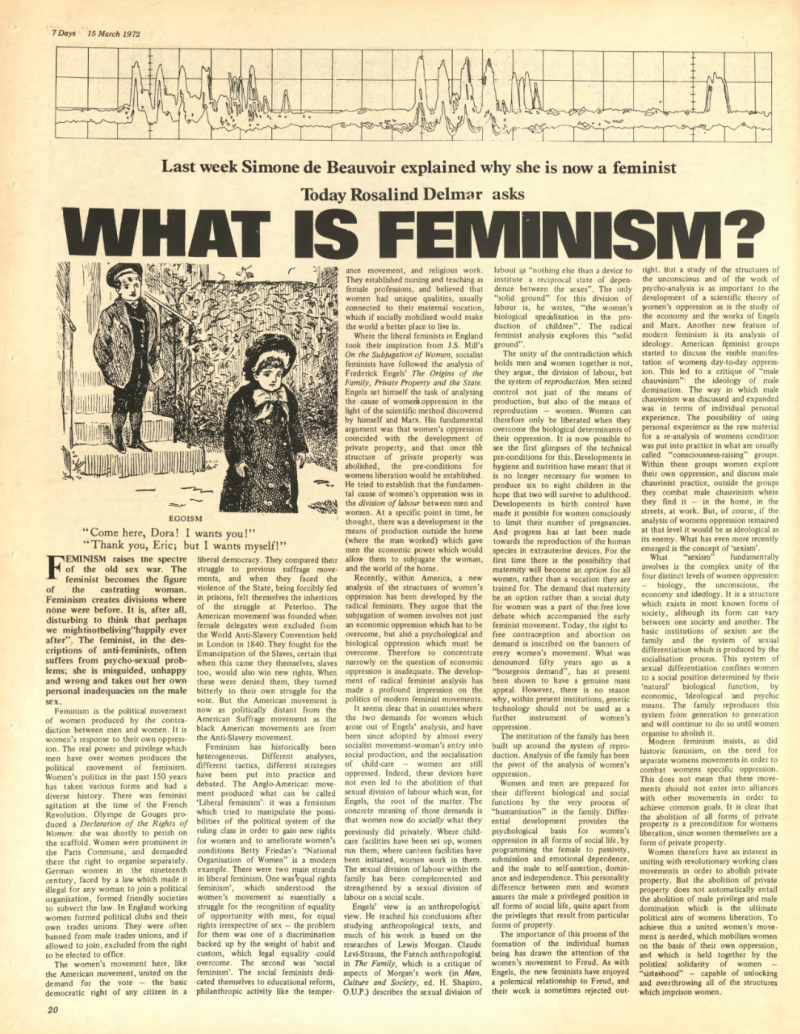 It is sad to note how many of the active members of the collective and its supporters are no longer with us, friends Peter Wollen, Clive Goodwin, Peter Fuller, and dear Fred Halliday [2] among them. Also sad to recall others whose brilliant work in the cultural field has fallen out of favour - I think here of Trevor Griffiths whose play Occupations, on the Turin strikes of 1922, was a subtle exploration of Gramsci and left political strategy. 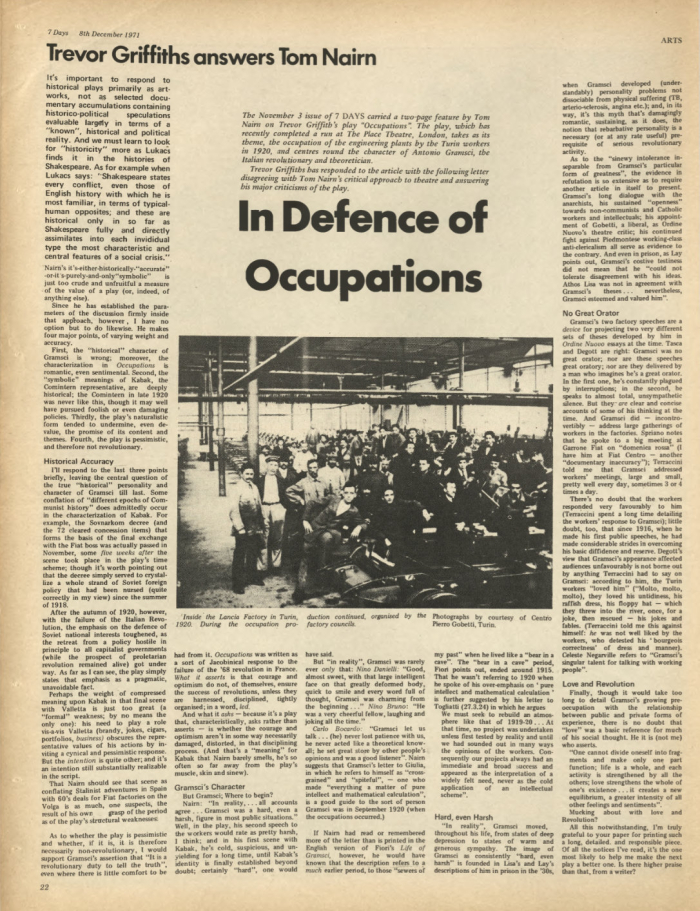 Since those times the work of the margins has mostly moved into the mainstream, and the members of the collective went into the academy, publishing, or into other professions. 7 Days was a short, intense, highly rewarding and formative experience for those associated with it. It was a space where politics, culture and radical ideas found expression. It forged some important and enduring friendships. When it folded I decided not to continue in journalism but to head for university, where I remained.

The times of 7 Days were so very different, shaped as they were by a young generation that believed that political progress and social change was possible. Important and positive things were achieved in and after the 1970s before reaction set in. Today we live in more threatening, darker times, but a new generation of radical activists has come into politics, incensed by growing inequality, corrupt elites, and the failures of governments to tackle the climate crisis. There is a revival of interest in Marxism and radical thought among students, and more urgent talk of the need for change. The work of cultural transformation continues, but proceeds by other means - the print media is joined by podcasts, social networking, blogs and much else besides. I suspect that if 7 Days were alive today it would be in one of those formats, or perhaps something entirely new, and, who knows, it might well have been able to survive and to flourish. 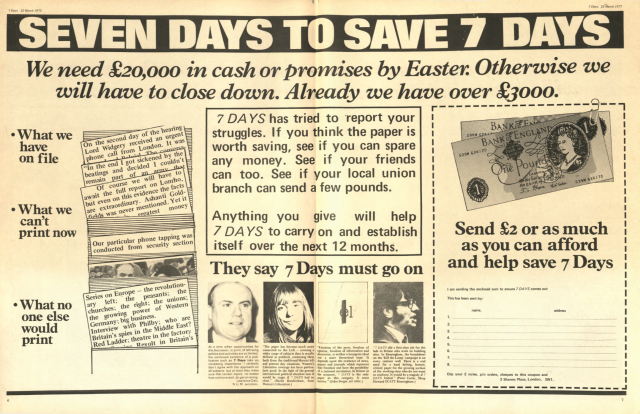 [1] Theoretical Practice started in 1970 as a reading group and set up other groups dedicated to thinking critically about Marx’s work and that of the French structuralists. It went on to produce seven issues of a journal also called Theoretical Practice, that published translations of leading theorists in the Althusserian school.