As many of you know, back in 2015 the British Library, working closely with partners at JiscŌĆÖs Journal Archives platform and with copyright holders, digitised and made freely available the entire run of Spare Rib magazines. We are delighted that this resource, documenting a vibrant and important period of womenŌĆÖs activism in the UK, has been so well used by researchers and those interested in the WomenŌĆÖs Liberation Movement.

It is therefore with considerable regret that we are confirming that the resource, as a result of the UK leaving the European Union, will no longer be available following the end of the transition period. The decision to close down the Spare Rib resource once the UK leaves the EU was made on the basis of the copyright status of the digitised magazine, which relies heavily on the EU orphan works directive. For a more detailed account of the reasons behind the suspension please see the British LibraryŌĆÖs blog from February 2019.

For researchers working on Spare Rib, the full run of the hardcopy magazine remains available via the British LibraryŌĆÖs Reading Rooms in London and at Boston Spa. Furthermore, the curated Spare Rib website, with contextual essays and digital images of selected magazine content, will remain available. This has recently been updated to include an interactive research map which plots feminist activity in the UK between 1972 ŌĆō 1993 based on analysis of Spare Rib letters and listings. Please see this recent blog post for more information about the map and the Business of WomenŌĆÖs Words research project which created it with the British Library.

While we recognise that the suspension of the digitised Spare Rib resource is a loss, we hope these other resources go some way to compensate. We will continue to liaise with the relevant Government departments to seek ways that the regulations could be updated to enable scholarship and research through an Orphan Works exception, so that this resource and others like it, can be made available in the future.

Think 1970s UK feminism was a purely metropolitan affair? Ever wondered whether the WomenŌĆÖs Liberation Movement stretched beyond the boundaries of big cities? The new digital map resource at the British Library might have some surprising answers. 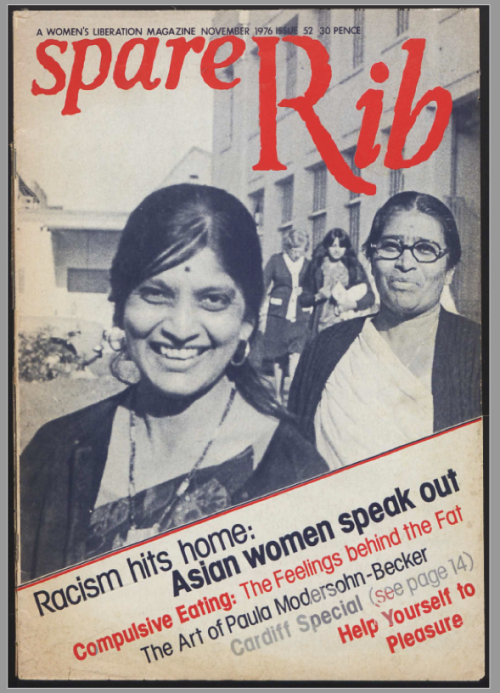 The Spare Rib map is the first digital resource to visualise the networks and activities of the WomenŌĆÖs Liberation Movement (WLM) across the UK and Ireland. It has been created by the Business of WomenŌĆÖs Words project, a research partnership between the British Library and the Universities of Sussex and Cambridge funded by the Leverhulme Trust. Its data is drawn from Spare Rib  (1972-1993), the iconic feminist magazine digitised by the British Library. Based on a sample (around 30%) of Spare RibŌĆÖs listings, adverts and letters pages, the map represents a slice of the intense feminist activity that flowered during the magazineŌĆÖs twenty-year run. What it shows is that the WLM was a truly national movement, with datapoints ranging from the Western Isles of Scotland to Leiston in Suffolk, and from Derry in Ireland to Falmouth in Cornwall. 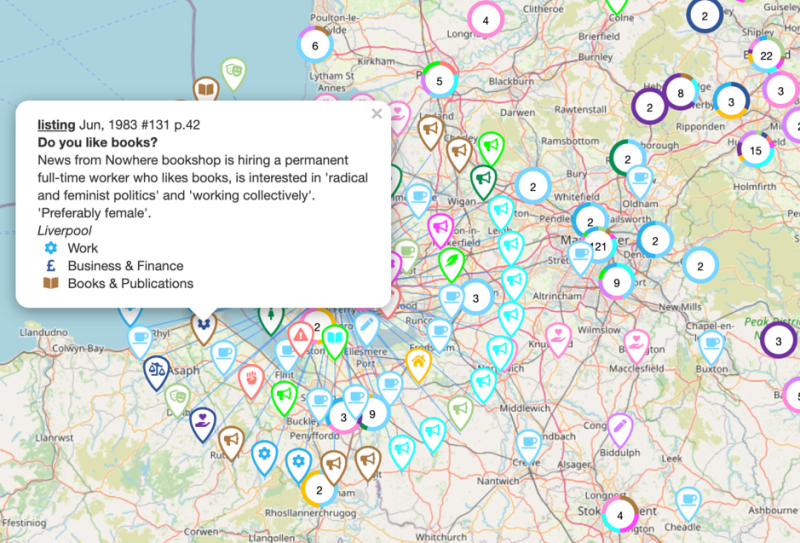 The map sheds new light on the structure of the WLM and illuminates its regional centres and hubs, as well as a wider web of more isolated feminist activity. Lancaster, for example, was a regional hub that hosted a number of feminist publications, womenŌĆÖs counselling services, a lesbian helpline and took part in the Feminist Book Fortnight; and Bangor in Wales offered an array of feminist groups, businesses selling feminist postcards, jewellery and shoes, and alternative communal accommodation. The mapŌĆÖs colour-coded categories and symbols visualise the sheer diversity of activities and goods generated by the WLM, from political demonstrations to carpentry workshops to co-operatively produced clothing.

Although the WLM is often thought of as outside capitalist transactions of buying and selling, the map makes clear that Spare Rib, and the movement more broadly, was a site of exchange ŌĆō personal, ideological, but also commercial. Businesses, from dating agencies to therapists to bookshops and publishers, were a key part of the feminist community and helped to advance the reach of the movement. The extraordinary number of women-only or lesbian B&Bs advertised in Spare Rib in the 1980s, for instance, demonstrate how women-run businesses extended the movement into some of the most rural parts of the UK, from the Lake District to the Isle of Arran, and from Piltown in Ireland to Yelverton in Devon. By drawing on letters as well as listings and adverts sent into Spare Rib, the map visualises not only the nationwide distribution of feminist events, commodities and services, but a network of (often critical) consumers and activists. It charts change over time, revealing the changing priorities and infrastructure of the movement, from consciousness raising groups to womenŌĆÖs centres, feminist businesses and womenŌĆÖs studies courses. 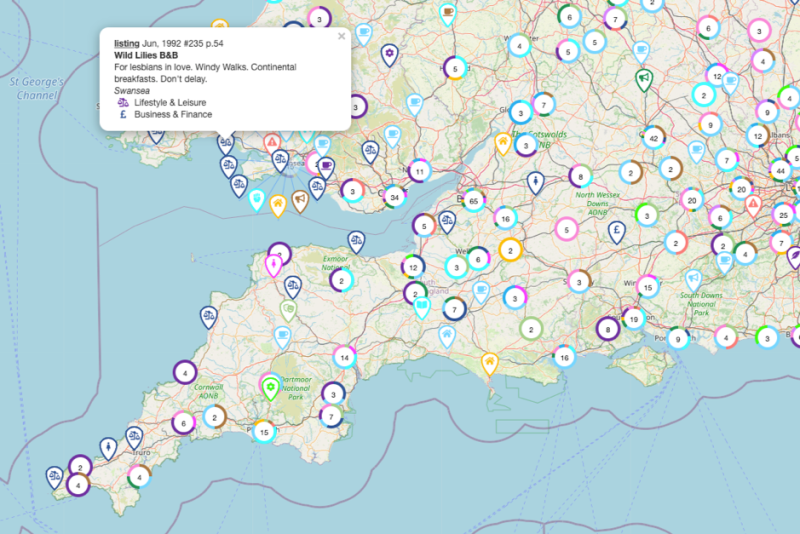 Fully searchable by category, year, keyword and geographical location, the Spare Rib map is a rich interactive resource which opens up new avenues of research for historians of UK and Irish womenŌĆÖs movements across two decades of intense activism.