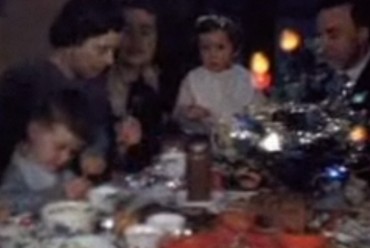 Frame still from the home movies of the Willson family of Handsworth, Birmingham, c.1945, held by the Media Archive for Central England

There's an article by Richard Morrison in The Times entitled 'Home Movies can be Historical Treasures'. It's a fine piece which nevertheless has a note of qualification in that title, for personal reasons, as Morrison describes:

As a boy, my heart always sank in the first week of September. Of course, the new school year loomed like a dismal black cloud. But that was also the week when my uncle — the proud, indeed boastful, owner of a priceless luxury item known as a “cine-camera” — would put on a film show, for which he would command the attendance of the entire Morrison clan plus any neighbours not quick-witted enough to have a prior engagement. Unfortunately, his films were invariably interminable, fuzzily focused chronicles of his annual holiday in Torquay. (Actually I do him a disservice. Sometimes he went to Paignton.) They seemed entirely unedited. Every seagull in Devon had its moment in the frame. Ever since then I have shuddered involuntarily at the very words “home movies”.

We've probably all had similar such experiences - shots following slow-moving ships til they sail out of sight, cameras panning up and down tall historic buildings - but in every frame there is nevertheless something uniquely precious, something missing entirely from the professional film. It is not just in the subject - which is ourselves - but in who holds the camera - which is again us. It is because home movies and personal films document the individual point of view that they are so precious and so worthy of archiving. Morrison says that they preserve a "unique record of changing social trends over the past century". Indeed they do, but they also document the personal; film not as entertainment or lesson, but as self-portrait.

The cue for Morrison's piece is the news that the Lottery Fund has awarded a £440,000 grant to the Media Archive for Central England (MACE) for a project entitled Full Circle, which will seek out home movies depicting Midlands life, preserve them, and bring them back to people for study and community use - full circle indeed.

MACE is based at the University of Leicester and is one of a network of public sector moving image archives in the UK, all of which are engaged in preserving home movies alongside the professional film and television productions one would expect to find in moving image archives. There are the four national film archives of the UK (the BFI National Archive, the Imperial War Museum, the Scottish Screen Archive and the National Screen and Sound Archive of Wales), and eight English regional archives, of which MACE is one. The others are the East Anglian Film Archive, Screen Archive South East, the North West Film Archive, the Wessex Film and Sound Archive, the Northern Region Film and Television Archive, and the South West Film and Television Archive. There's also London's Screen Archives, an emerging network of moving image collections across London.

All of these archives are prepresented by the Film Archive Forum, and on its site you can find contact details, guides to online databases, a map of the archives, and general information on their work (though some of the links need updating). All of them provide expertise on and access to films of their region, though researchers should always contact them in advance with requests rather than just drop in.

A growing amount of home movie footage (and other kinds of film) held in these archives is available to view online. Moving History is a sampler site with 100 or so clips from each of the Film Archive Forum archives, designed to demonstrate the value of such material for use in higher education. Other sites well worth visiting includes Yorkshire Film Archive Online, Scottish Screen Archive, London's Screen Archives' YouTube channel, and Screen Archive South East's Screen Search. MACE itself has 1,600 clips online from its 35,000 catalogued records.

The literature on home movies is slender, but growing. The leader in the field has been Patricia Zimmerman, who writes mostly on the American amateur film. Her books are the agenda-setting Reel Families: A Social History of Amateur Film (1995) and Mining the Home Movie: Excavations in Histories and Memories (2008, co-edited with Karen L. Ishizuka). We also have Alan Kattelle, Home Movies, A History of the American Industry, 1897-1979 (2000), James M. Moran, There's No Place Like Home Video (2002) and Ian Craven, Movies on Home Ground: Explorations in Amateur Cinema (2009).

To find out more about home movies, visit the Home Movie Day site, an international initiative that promotes the home movie and its archival care.

But, as Morrison importantly notes, we are moving into a new era of home movie filmmaking, away from the 9.5mm and Super8 films of the past, to digital video.

But we also need to cherish the digital films being made by ordinary people today as lovingly as previous generations cherished their flickering movies. It’s a strange paradox that the oldest moving-picture medium — film reels — should be the best preserved, while videos stored on computers are often erased or lost when people upgrade their software or buy a new PC.

How true, how true. Somehow we associate film with archives, but videotape or hard drives lack the necessary romance to make us think that the best home for such material long term should be in an archive. Of course, time has to pass before we often see the value in such records, but we are so cavalier with the films we make of ourselves today, because they are so easy and cheap to produce, that we forget how precious and how ephemeral they are. One push of a button in error and the memories are gone. Moreover, there is a belief that DVD is somehow an imperishable medium, when in fact DVD, videotape and the other video carriers of today have a very uncertain longevity - far more uncertain than cinefilm, which has its problems but has nevertheless hung on as a medium for decades.

Academic studies are just beginning to appear which examine the modern 'home movie'. David Buckingham and Rebekah Willett's Video Cultures: Media Technology and Everyday Creativity (2009) provides a valuable collection of essays on the motives and outputs of the camcorder generation, looking at the impact on society of video equipment, mobile video and YouTube.

Here at the British Library we don't have any home movies, but we're very interested in their potential for the study of sociology and modern history. We held a seminar recently, for sociologists and archivists, on what we're calling 'the personal and everyday film', looking to establish links between the home movies of yesteryear and our digital lives today. Digital Lives is the title of a BL project which has been looking at the forms in which we record our lives today and determining policies for the acquisition, care and access to such records in the future.

Our digital lives aren't just held on video of course - they are documented in emails, Word documents, PDFs, digital photos, Tweets, blogs, AudioBoos, texts and the rest. In caring for the personal film of the future, it has to be bound up with all the other means by which we record our own lives. But we need to care for it now, not ten or twenty years away. By then too much may have been lost.