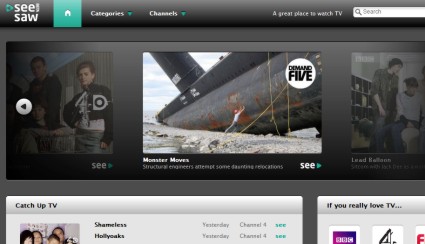 I've been testing out SeeSaw, the newest kid on the IPTV block. It's an archive and catch-up service for television programming - currently BBC, Channel 4 (4oD) and Five programmes - and it's very good. Clearly laid out, easy to use, good quality image, smooth playing, helpful programme information, adverts at the start and middle of programmes none too obtrusive - a very polished offering. Before you rush off and follow the link, do note that it is in Beta mode only at present, and only available to test by invitation. But leave them your email, and you may get invited and start spreading the word for them, just like I'm doing.

So, where did SeeSaw come from? Well its history is one of the most interesting things about it. Cast your minds back to 2007 and word started to spread of an exciting new project being developed by BBC Worldwide, ITV and Channel 4, with the curious title of Project Kangaroo. Kangaroo was going to be the future of television (or at least one of the futures of television). It would be an archive of television content on the Web, representing collectively the interests of the BBC, ITV, Channel 4 and maybe others. However, the beautiful idea ran foul of the Competition Commission after complaints raised by those such as Sky who weren't part of the plans. The debate dragged on, Kangaroo chief Ashley Highfield (who had quit the BBC as Director of Future Media and Technology to take on this new project) left to join Microsoft, and eventually the Competition Commission announced (February 2009) that the project could not go ahead.

Part of the SeeSaw programme details page for Philosophy: A Guide to Happiness

However, money had already been spend on the technology, and in mid-2009 a broadcast technology company named Arqiva stepped in and bought up the Kangaroo technical infrastructure, to build their own readymade IPTV service. The result is SeeSaw (which had been considered as a name for the service during the Kangaroo period). As said, it's an impressive service. Programmes available include The Trials of Life, Shameless, The Ascent of Money, Around the World in 80 Days and Skins, categorised under Comedy, Drama, Factual, Lifestyle, Entertainment and Sport. Moreover there's a catch-up service for recent TV programming (again, BBC, 4oD and Five only), so I've just caught up with the first half of the excellent Tower Block of Commons which I'd managed to miss first time around.

However, SeeSaw faces an increasingly crowded market. We already have BBC iPlayer, ITV Player, 4oD and Demand Five for the main terrestrial channels. A similar aggregator site offering programming from BBC, ITV and Channel 4 was launched late last year by Microsoft (Ashley Highfield no less), MSN Video Player, which does much that SeeSaw does. Meanwhile, the BBC, ITV, Channel 4, Five, British Telecom and TalkTalk have joined forces behind another 'project', Project Canvas. This isn't quite the same as Kangaroo (though would undoubtedly have had a close relationship with it). Canvas is about establishing common standards for IPTV so that web TV and broadcast TV can come together in one glorious package on your television. The result would be the next step on from Freeview (so that's be another set-top box you'll be needing to find space for). The third public consultation by the BBC Trust on Canvas has just ended. It has faced a lot of opposition from other broadcasters, particularly Sky, but a lot is now riding on it.

So what does this all mean for scholarly access to television content? As far as catch-up services like iPlayer and video-on-demand archive TV services like SeeSaw goes, it means that we have marvellously easy access to a rather small body of content which tends to be repeated from service to service. 4oD is taking us beyond recent and familiar programming to make available a large amount of archive content, and we're all waiting to send what the next moves will be from the BBC as it continues to develop its new archive strategy. Access is improving all the while (albeit streamed rather than content for downloading and re-use), but still huge amounts lie hidden, kept so by costs, rights issues, and just the sheer amount of content building up in the archives. Off-air recording services in UK universities working under licence through an exception in the Copyright Act mean that much recent television content is available to researchers on campus, but so much more remains out of sight. It's the hidden content that we need to concentrate on - the market is making the cream available very nicely indeed.