Editing out the Fascists 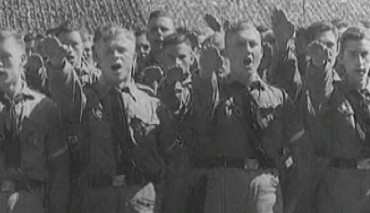 The National Archives recently issued some declassified MI5 files which cast an intriguing light on one corner of British film history. An MI5 dossier says that Sidney Bernstein, owner of the Granada cinema chain, a founder of ITV, and later Lord Bernstein and a fellow of the British Film Institute, was a Soviet informer. As The Times report puts it,

Sidney Bernstein, later Baron Bernstein, helped the Soviet Embassy to vet journalists applying to go to Moscow and provided funds for a Czech-German agitator named Otto Katz, said to have been Marlene Dietrich’s first husband. He was known for persuading Hollywood stars to contribute to the Anti-Nazi League, a Communist front.

What particularly caught my eye though was this line from a 1936 Security Service report on Bernstein:

Sidney Bernstein is now reliably reported to be an active secret Communist ... He always cuts the news films in his cinemas so that Fascist scenes etc which might make a favourable impression are removed. Items about Russia are given prominence.

Now this is fascinating - but was it possible?

British newsreels were notoriously conservative in politics and supine towards authority. Firmly established as a part of the entertainment package that was the cinema programme, they delivered a ten-minute package of news stories that kept audiences informed but favoured royalty, sport, tradition and the upbeat. In the 1930s there were critics on the Left who derided the newsreels' political attitudes, and in particular felt that their treatment of the Spanish civil war at times revealed a Nationalist, or quasi-Fascist, bias.

Whether that is entirely fair or not as regards the newsreels is a moot point. Some might argue that they were more facetious than fascistic, but they undoubtedly aroused passions in those who felt that the Republican cause was being overlooked, and that the newsreel's avowed impartiality was hiding political truth from British audiences.

But did Bernstein edit the newsreels in his cinemas to counter this insidiousness? It is intriguing to think that he could have done so, but hard to believe that he actually did. Granada was a relatively small circuit - Bernstein controlled 30 or so cinemas by 1939 - and the way that newsreel distribution worked was that one print would service several cinemas through a system of what were called 'runs', whereby the older the print (and hence the older the news), the cheaper it was to rent (newsreels were issued twice-weekly). One could estimate that a few as half-a-dozen prints could serve all Granada cinemas, though there were five newsreels series on the market at that time - Pathe Gazette, Gaumont-British News, British Paramount News, British Movietone News and Universal Talking News, which would have added to the complexity. But even if stories might conceivably have been cut, giving extra prominence to other stories was not possible unless a new commentary was added, which simply not technically possible. Moreover I have not come across any evidence which remotely suggests that Bernstein - or any other exhibitor of his prominence - tampered with the newsreels. One feels that the story would have had to have leaked somehow - not least by prints with the missing or altered stories being returned to the newsreel companies who were most particular about how their product was treated.

Though it is appealing to think that Bernstein - who had strong socialist sympathies, though there is no evidence that he was ever a communist - could have got his own back on the newsreels by cutting out stories that he felt were pro-Fascist, the Secret Service report is most likely a product of rumour or fantasy. Bernstein became a film adviser to the Ministry of Information, and went on to enjoy a notable career with Granada television, ending up a revered elder statement for the industry.

If you are interest in British newsreels, the first place to look is the BUFVC's News on Screen database, which is a near-comprehensive record of all British newsreel issues 1910-1979, including thousands of digitised commentary scripts. Newsreels themselves are easy to view. The whole of the British Pathe archive 1896-1970 is freely available online, as is the British Movietone library (1929-1979), though the latter requires registration. Those in the UK university sector should check when their institution is signed up to the JISC's NewsFilm Online, which includes a large proportion of the Gaumont newsreel library from the 1920s-50s, while much of this content anyone can find for free (as low resolution copies) on the ITN Source website, under its New Classics series.

The best study of British newsreels in the 1930s (there aren't many) is Anthony Aldgate's Cinema and History (1979), which is particularly strong on the newsreels and the Spanish Civil War. For a more general account with some key original texts on the production and reception of the newsreels in the 1930s, see Yesterday's News: The British Cinema Newsreel Reader (2002) - edited by yours truly.