AMIA, or the Association of Moving Image Archivists, has announced a short film and video competition, with the challenge to any budding filmmaker to create a film or video that conveys the importance of preserving the world's moving image heritage. The competition is described as follows:

The Association of Moving Image Archivists' first short film/video competition will highlight the importance of preserving our moving image heritage. Increasingly, our cultures are reflected through moving images - as news, entertainment, and historical artifact. This year, AMIA celebrates its 20th anniversary as an association of people dedicated to preserving those moving images. This competition will provide an opportunity to emphasize the importance of saving our moving images as important educational, historical, and cultural resources. It's about originality, imagination and the ability to engage the audience in 180 seconds or less.

The competition is open to everyone - so share this information with friends, colleagues, students ... anyone you know with an interest in preserving our moving image heritage.

Prizes
One Grand Prize: In addition to receiving $2,500(USD) prize, the winning submission will be announced on October 27 as part of the World Day of Audiovisual Heritage celebration, and will be screened at the AMIA 2010 Archival Screening Night, November 5, 2010 in Philadelphia, PA. It will also be featured on the AMIA website.

Runner-up & Finalists: The runner-up will receive $1,000(USD). The runner up and finalists' productions will be included on the AMIA website.

Submissions will be accepted beginning June 15, 2010 and ending August 30, 2010. The winner and runner-up will be selected by vote of AMIA members from finalist entries posted onthe AMIA Website.

Further information, rules and submission guidelines can be found on the AMIA 2010 conference website at www.AMIA2010.org. AMIA describes itself as "a non-profit professional association established to advance the field of moving image archiving by fostering cooperation among individuals and organizations concerned with the acquisition, description, preservation, exhibition and use of moving image materials."

It has members (individual and institutional) across the world, and it plays a major part in supporting the supporting the preservation of the moving image heritage, though its conference, other events, publications, awards and its various groups and committees. Its Listserv discussion list AMIA-L can be subscribed to by anyone and is an essential source for anyone wishing to keep up with moving image archive developments (as well as being an invaluable source of advice).

Recording of the Week: Etude No. 5, Op. 10 performed by Alfred Cortot 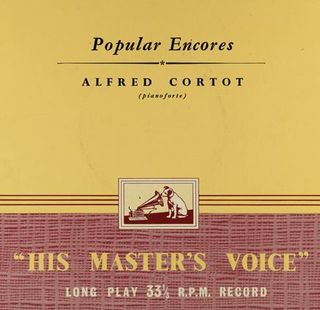 Ginevra House, who from 2007-2009 worked on the second phase of the Archival Sound Recordings project at the British Library Sound Archive, writes: "Cortot's strikingly original performance style is a real treat throughout the Chopin collection - I've never heard anyone get so far through the 'Black Key' etude without using the sustain pedal":

'Recording of the Week' highlights gems from the Archival Sound Recordings website, chosen by British Library experts or recommended by listeners. This week's item was originally published in 1954. It was selected from the Chopin collection, which gives online access to 1,520 recorded performances of key piano repertoire, including all the Mazurkas, Preludes, Etudes, Polonaises and more, covering a period of approximately 50 years. Further information on the Chopin collection.