Today sees the beta release of our new interactive sound mapping project, showing Sheffield soundscape recordings contributed by members of the public: http://sounds.bl.uk/uksoundmap. The project arose from collaboration between the British Library, led by my colleague Isobel Clouter, and the Noise Futures Network, an interdisciplinary network of UK academic researchers interested in our acoustic landscape. Coupled with the opportunities that improvements in mobile phone and web technologies now offer, the survey will aggregate useful research data in a cost effective and innovative way. 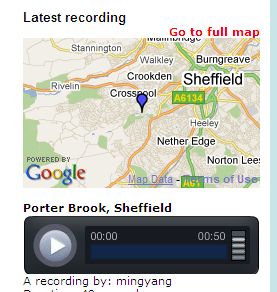 Another key component in this crowdsourcing venture is the use of the free Audioboo application for smartphones.  With a large online user community, Audioboo provides a simple tool to capture and publish raw research data of sufficient quality for later analysis by acoustic ecologists and urban planners.

The beta version of UK SoundMap is focused on Sheffield, where some of the Noise Futures Network participants are based; the survey will be extended nationwide later in 2010.  Sheffield-based Audioboo users are now being encouraged to tag their ambient recordings with ‘uksm’ and add supporting comments.  Recordings will then appear on the interactive map, which anyone can listen to.

Sound Archive staff Chris Clark and Ian Rawes will be working with me over the coming months to help make this a truly participatory project. To find out more and see the map developing as sounds are contributed, visit: http://sounds.bl.uk/uksoundmap

I built something similar at boobase.com last year -
geotagged boos are plotted on a sequence of
maps and can be listened to inline, non-geotagged
boos appear in a player and associated Tweets
are streamed. If you need any help, let me know! I have
provided free modified versions of this and this
looks like a great project. I'm @buddhamagnet on Twitter.

thanks for your comments and offer of help, Dave. I like the array of toggle-able maps on boobase.com. Will pass this on to our web team - Richard