Recording of the week: David Morley

The Library's recording project Between Two Worlds focuses mainly on poets who are bilingual or whose first language is not English. David Morley is slightly different, although in his own way he very much fits the project's theme of work informed by dual cultures. Born in Blackpool to a Romani mother, his work mixes standard English with Romani words and phrases to uniquely powerful and intriguing artistic effect. This 2010 British Library studio recording includes the only complete audio rendition of David's long poem 'Kings'.

Audio interviews conducted for the Theatre Archive Project are now available to listen to online. Full transcripts are also included.

The Theatre Archive Project is a collaboration between the British Library and De Montfort University, although the partner for much of the project was the University of Sheffield. The project reinvestigates British theatre history 1945-1968, from the perspectives of both theatregoers and practitioners.

Since the project began in November 2003, recordists - mainly University of Sheffield students - have conducted more than 250 interviews with those visiting or working in the theatre during the period. Almost all of those audio recordings and transcripts are available on this site. More are still being added.

In addition there are interviews with theatre managers, producers, directors and designers, plus - giving a valuable non-professional perspective - many interviews with ordinary theatregoers.

The Library has over 33,600 oral history recordings (ranging from 10 minutes to 30 hours in length) and around 800 of these are available via the ASR website.  Of these 800 recordings, more than 300 are available to anyone worldwide (including interviews from Jewish Survivors of the Holocaust, Oral history of British Science and the George Ewart Evans collection).  In addition, the ICA Talks, the Opie collection of children's games and songs and many recordings within the Accents and Dialects package (which are from the Library's oral history collections) are also available to everyone.

So whilst the vast majority of the Library's oral history recordings are still only accessible onsite at the British Library at St Pancras and Boston Spa, the the Oral History team (in line with the British Library's 2020 Vision) are trying to democratise access to the collections and we are increasingly using the Archival Sound Recordings website to provide remote access to more recordings.  For example, interviews from our newest project An Oral History of British Science are being made accessible online as soon as they are complete and we have been gradually making interviews that were previously only accessible to those in UK Higher Education available to all users - the most recent of these are the interviews with Dame Josephine Barnes and with Sir Joseph Rotblat.

In this first section of her interview, Dame Josephine Barnes, the first female president of the British Medical Association, discusses childhood, studying physiology at Oxford in the 1930s (a time when the university imposed a quota on the number of women) and becoming a medical student at the University College Hospital Medical School in 1934:

The British Library oral history collections contain a wealth of information about health related issues, many from a patient perspective.  Two powerful collections tell the life stories of people with bleeding disorders who were infected with HIV through contaminated blood products.  Of the 1200 people infected with HIV in the late 1970s and early 1980s, over 800 have now died. Between 2003 and 2005 the HIV and Haemophilia Life History Project recorded the stories of thirty people with bleeding disorders and HIV. It became clear that in addition to these important recordings, there were many more, often silenced, stories, and a follow-up project, entitled HIV in the Family completed in 2007, gave a voice to thirty-six family members who witnessed their partners, their children, siblings or their fathers face the challenges of living, and dying, with HIV infection. The core interviewing team were based at the University of Brighton and both projects were run in partnership with National Life Stories funded by the Heritage Lottery Fund and supported by The Haemophilia Society and the Macfarlane Trust.  An article about the project, including a powerful speech from interviewee Paul Bateman, was published in the NLS Review 2007-2008.

Four years after the end of the HIV in the Family project, Rob Perks and I were delighted to host at the British Library twenty-three nurses undertaking specialist haemophilia training.  Together with Robert James, a key team member on both projects (and himself an interviewee) we introduced the nurses to the powerful testimony contained in the collection, and the fantastic website that accompanied the two projects: www.livingstories.org.uk. It was a moving afternoon, but clearly demonstrated the importance of these testimonies for health professionals in training.  Although there are – thankfully – no new cases of haemophiliacs contracting HIV and Hepatitis C through contaminated blood products, haemophilia is a hereditary genetic disorder and the nurses we spoke to will have contact with current patients whose families have direct experience of this horrific episode in the history of the health service. 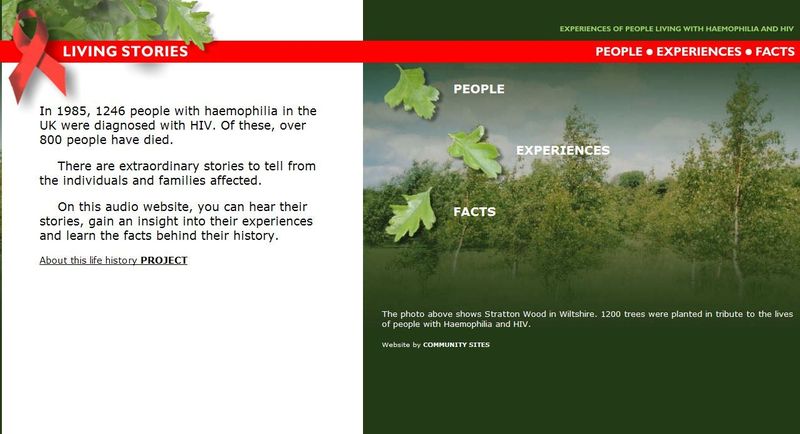 Recording of the week: One of the earliest chamber music recordings

Recorded more than 105 years ago, this recording of the Minuet and Trio from Beethoven's Piano Trio in C minor Op. 1 No. 3 is one of the earliest recordings of chamber music by a well known and highly regarded ensemble. The violinist, Achille Simonetti, was born in 1857 and during the 1910 season the group performed all of Beethoven's Piano Trios in London. This single sided ten inch disc, made by the Gramophone Company, has particularly good recorded sound for its age.

Binaural stereo on the UK Soundmap

Less familiar are auditory illusions. The University of California psychologist Diana Deutsch is responsible for discovering many of the more recent ones, and she's given them intriguing names like the titles of Robert Ludlum thrillers, including the Tritone Paradox and the Cambiata Illusion.

One auditory illusion which is now so familiar that it's taken for granted is stereo sound reproduction. Slight differences in the sound played by two speakers spaced apart conjure up what's appropriately called the phantom image, giving the listener the impression they're hearing a continuous soundfield curving in from the sides.

The stereo experience was once considered exciting enough for Count Basie to perform the piece Stereophonic, and for Cole Porter to write the song Stereophonic Sound for Fred Astaire and Cyd Charisse in the 1957 film Silk Stockings:

Stereo uses differences between its channels to create the illusion of spatial sound. These can include timing, frequency and loudness, although not necessarily together. One technique which combines all three to produce vivid and realistic stereo images is binaural stereo, and some UK Soundmap contributors have been using it.

The phantom image of a good binaural recording is like the glass in Philip Larkin's poem Water in which 'any-angled light would congregate endlessly'. It envelops the listener to create a strong sense of being present at the recording itself. Individual sounds seem to come from precise locations all around.

To record in binaural stereo, a tiny microphone is placed either inside or at the entrance to each canal. In this way they're well positioned to capture the differences which off-centre sounds will present to each ear.

Sound waves from a dog barking to your left will be slightly less intense when they reach your right ear compared to your left ear. They'll also arrive at your right ear up to half a millisecond later. How the brain is able to detect such a small time lag is impressive, especially since even the fastest nerve impulses are propagated at less than a third of the speed of sound.

Lastly, the mass and shape of the shoulders and of the head itself, and the convolutions of the ear lobes, will all produce subtle changes in the frequencies reaching each ear. Our hearing of the world is never disembodied.

Drawbacks inherent to the technique have prevented binaural recording from being widely used. The apparent realism of the stereo image is degraded when played back over loudspeakers. Binaural recordings are best listened to using headphones. With that last caveat in mind, here are some binaural sounds from the UK Soundmap.

The county of Suffolk has yielded some good recordings, including these two by contributor ermine. First, the sounds of a game auction at Campsea Ash:

Next, the twittering of zebra finches at Stonham Barns:

Binaural microphones are relatively cheap, with some pairs priced at well below £100. Although one giant electronics corporation registered several binaural patents in the 1970s, the needs of hobbyists are met by a cottage industry mainly based in the United States.

However convincing it might sound, it is a mistake to assume that a binaural recording must be an accurate reproduction of the original soundscape. It is an illusion, but with enough of the right cues for the brain to construct a familiar-seeming perception of another time and place.