The first commercially available recordings of Japanese birdsong were released by the Japanese Victor Company in 1954. The publications comprised three beautifully designed albums, each containing a set of three double-sided 78rpm discs and an illustrated booklet describing the birdlife that could be heard on these records. For the first time ever, people could listen to sound recordings of the songs and calls of birds that lived on the eastern fringes of the Palearctic region (Europe, north Africa and northern areas of Asia).

These publications include the earliest known wildlife recordings made in Japan, such as the Japanese Scops Owl and the Japanese Paradise Flycatcher. In addition to individual species recordings, the sets also include dawn chorus recordings featuring a wealth of different birds. 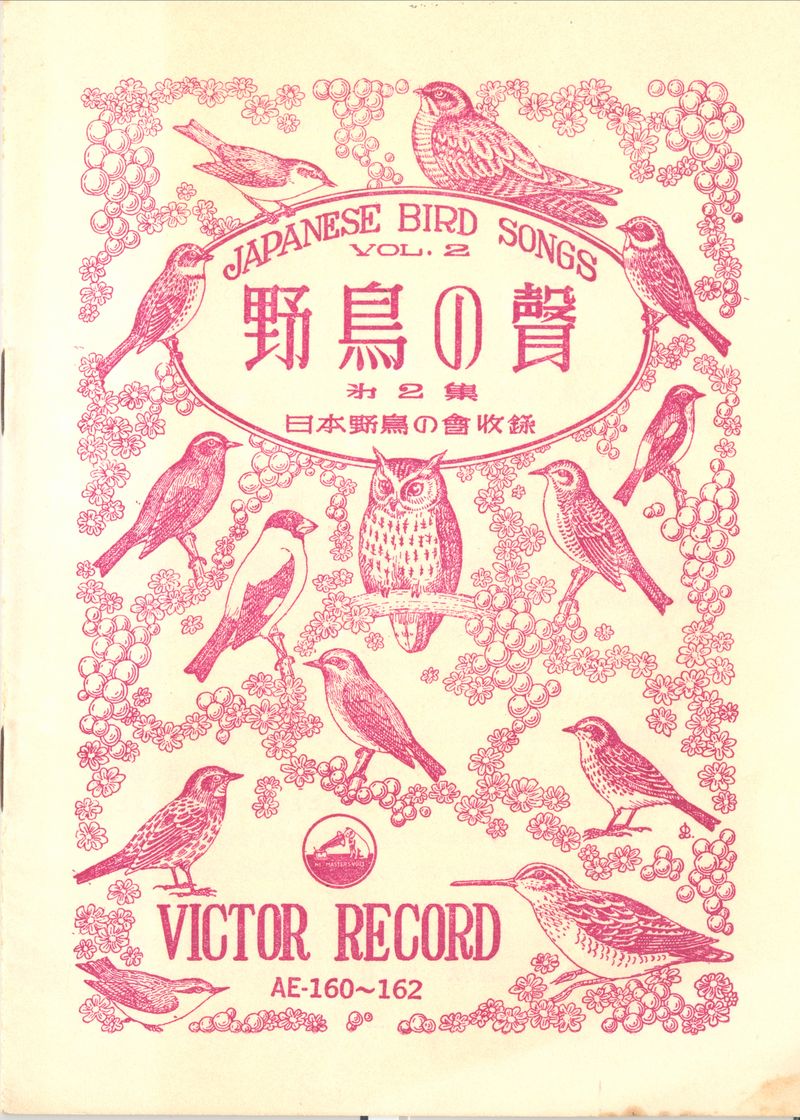 The recordings were made by Tsuruhiko Kabaya, a graduate of Tokyo University, and Kasuke Hoshino, manager of the Hoshino Hot Spring Resort. Kabaya had been experimenting with acetate discs before acquiring an early tape recorder in 1951, while Hoshino had begun to study the sounds of birds found in the woodland surrounding his resort. According to Kabaya, the pair came together because he owned a tape recorder while Hoshino had access to a wealth of birds and, crucially, a nearby power supply!

The recordings featured on Japanese Bird Songs vols 1 - 3 are the latest sounds to be added to Early Wildlife Recordings.

Recording of the Week: Lullabies

Arthur Henry Fox Strangways Collection. "Lullabies" recorded in India in 1910/11 which demonstrates the reality of the recording medium as the equipment is heard to be wound up mid-song. Another example from the British Library's Historic Ethnographic Recordings collection included this year in UNESCO's Memory of the World International Register.

To celebrate Disability History Month we have launched a new content package on the Archival Sound Recordings website called 'Disability Voices'.  The interviews available under the 'Disability Voices' package are from a number of the ‘Personal health, mental health and disability’ oral history collections at the British Library and we hope to add more collections to the package in the future.

‘Speaking for Ourselves: An Oral History of People with Cerebral Palsy’ was a two-year partnership project run in 2004 and 2005, led by UK disability charity Scope and supported by the Heritage Lottery Fund, which trained sixteen disabled volunteer interviewers to record life story interviews. The final collection includes 36 life story interviews with people with cerebral palsy over the age of 50.

‘Unheard Voices: Interviews With Deafened People’ (catalogue no: C1345) was conducted in 2008 and 2009 by Hearing Concern LINK, now Hearing Link, a charity that provides information and support for those with hearing loss and their family members. The project was supported by the Heritage Lottery Fund. Sixteen volunteer interviewers from the deafened community were trained to interview other members of the community. The interviews were audio recorded and supported by a Speech to Text Reporter, who provided a live text version of the conversation on a monitor.

Paralympians Baroness Tanni Grey-Thompson and Danny Crates were interviewed for the project ‘An Oral History of British Athletics’ (catalogue no: C790), a rolling programme of life story interviews with British athletes which started in 1996.

Geoff Webb's self-recorded reflections were intended to be the basis for an autobiography. As a result of polio Geoff Webb was paralysed and on a positive pressure respirator and this dictated the manner in which he spoke his testimony. He was sometime editor of 'The Responaut', a magazine for the community of people in this position. This recording was made shortly before his death from cancer. As an audio autobiography it contrasts with other elements in the Disability Voices package.

UNESCO has officially recognised The British Library’s Historic Ethnographic Recordings as a collection of global significance and outstanding universal value. UNESCO’s International Advisory Committee has agreed to include The Historic Ethnographic Recordings in their Memory of the World International Register - akin to the list of World Heritage Sites for documents and archives. The Historic Ethnographic Recordings collection contains many rare field recordings of orally transmitted cultures made throughout the world by linguists and musicologists. Some of these recordings represent the earliest extant sources for research into those cultures and have been captured in the most vivid format available at the time, the linguistic and cultural diversity of today’s ‘global village’. This is a recording held in the BL on behalf of the English Folk Dance and Song Society and now included in the UNESCO registration. It's labelled: There is an ale house [Died for Love] and was recorded in England in 1908 on wax cylinder. The recording includes a violin solo played by John Locke.

Recording of the Week: The Decline of the Dove

Over the past three decades, the soothing song of the Turtle Dove (Streptopelia turtur) has become an increasingly rare sound of the British countryside. Along with other birds that once thrived in farmland areas, the Turtle Dove has struggled to cope with changes in agricultural practices. The species is also a target for hunters across continental Europe who shoot individuals returning from their African wintering grounds. Both pressures have resulted in a significant decline in UK population numbers, so that today the Turtle Dove is considered a high risk (red status) species.

When Ludwig Koch made this recording in 1936 however, the purring song of this delicate dove was a familiar component of the sonic landscape of our rural regions. This 30 second snippet of song formed part of a collection of British bird recordings that were released during the same year under the title ‘Songs of Wild Birds’.  The 2 disc set, published by H. F. & G Witherby Ltd, also includes the sounds of other species that have seen their numbers plummet in recent years, such as the Nightingale and the Cuckoo.

Hopefully the work of local and national conservation bodies will mean the song of this beautiful dove will once again become a signature sound of the British countryside.

UNESCO has officially recognised The British Library’s Historic Ethnographic Recordings as a collection of global significance and outstanding universal value. UNESCO’s International Advisory Committee has agreed to include The Historic Ethnographic Recordings in their Memory of the World International Register - akin to the list of World Heritage Sites for documents and archives. The Historic Ethnographic Recordings collection contains many rare field recordings of orally transmitted cultures made throughout the world by linguists and musicologists. Some of these recordings represent the earliest extant sources for research into those cultures and have been captured in the most vivid format available at the time, the linguistic and cultural diversity of today’s ‘global village’. The recordings are truly global in their scope ranging from Africa, South Asia, Australia and the Pacific Islands, China, Eastern Europe and South America, as well as the more familiar sounds of England, Scotland and Wales. The collection dates from 1898 to 1951, the earliest being wax cylinder recordings from the groundbreaking Cambridge Anthropological Expedition to the Torres Strait, led by Professor A.C. Haddon. This was the first British expedition to use the phonograph for research purposes. The latest recordings are the Bogumil Witalis Andrzejewski acetate (nitrate lacquer) discs which comprise songs, stories and spoken texts recorded as part of Andrzejewski's linguistic research tour in Somaliland and Somalia in 1950-1 under a Colonial Welfare and Development Research Scheme.

This recording was made before the Torres Strait expedition set off. It's labelled: "Vocal demonstration of phonograph (or graphophone) - wishing Mr. Ray success on his journey”. It gives a beautiful glimpse into Victorian life!