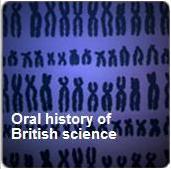 The National Life Stories team were saddened to learn of the death last week of Sir Alan Cottrell, who was interviewed for the Oral History of British Science project in March 2011 (Sound and Moving Image Catalogue reference C1379/46).  Sir Alan was born in Birmingham in 1919 and studied at the University of Birmingham for both his BSc and PhD . A centrally important figure in the modern history of metallurgy, he spent the second Second World War improving the hardening of tank armour, before moving postwar to atomic research establishment at Harwell, where he worked ensuring the safety of the Magnox nuclear reactors. As Goldsmiths Professor of Metallurgy at the University of Cambridge he became a champion of new approaches to metallurgy and understanding how materials behave on an atomic level. In 1965 he left academic life to serve in a succession of senior posts in the scientific civil service, and succeeded Sir Solly Zuckerman as Chief Scientific Adviser in 1971. The interview with Sir Alan can be accessed online via British Library Sounds.