There are currently five collections within the Environment and Nature section of British Library Sounds. These content packages barely scratch the surface of the wildlife sounds collection archived at the British Library, yet provide an introduction to the types of natural field recording that have been amassed over the past forty years.

Some collections, such as Amphibians and British Wildlife Recordings, cover a specific class of animal or focus on a particular location, whereas others, such as Soundscapes and Listen to Nature, are broader in both content and geographical coverage.

Early Wildlife Recordings is the latest collection to be added and presents an assortment of species and habitat recordings that were produced during the first half of the twentieth century when wildlife sound recording was still in its infancy.

Most of the recordings can be accessed by anyone, wherever you are in the world, so please feel free to explore the wealth of material that British Library Sounds has to offer. 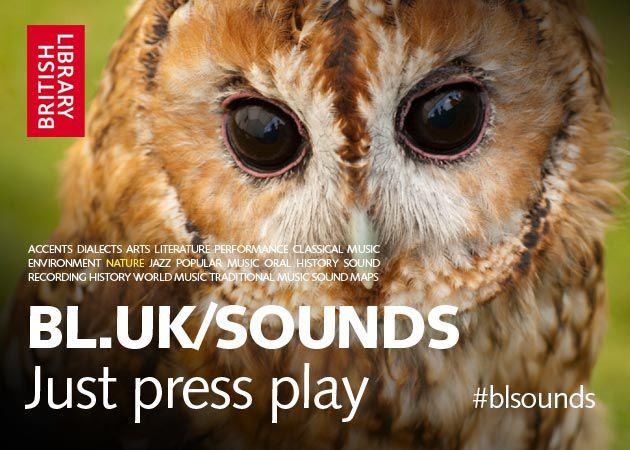 Further interviews with scientists, engineers and technicians have been made accessible worldwide via the British Library Sounds website.  The latest interviews available are:

All of the interviews are accompanied by a fully searchable content summary and most also have a verbatim transcript available as pdf.  The interviews were conducted for the Oral History of British Science project; further information on the project can be found via the project webpage, wikipedia and the History of Science blog.

Have you recently visited the new British Library Sounds website and tried out its new features?

Simply register on http://sounds.bl.uk, then those features are enabled. Registering allows you to make notes, add tags and personally manage items using favourites and playlists.

An example of timed annotations is here:http://sounds.bl.uk/Accents-and-dialects/Survey-of-English-dialects... (& see the screen grab image below), but please do register yourself and add your own notes to other tracks. 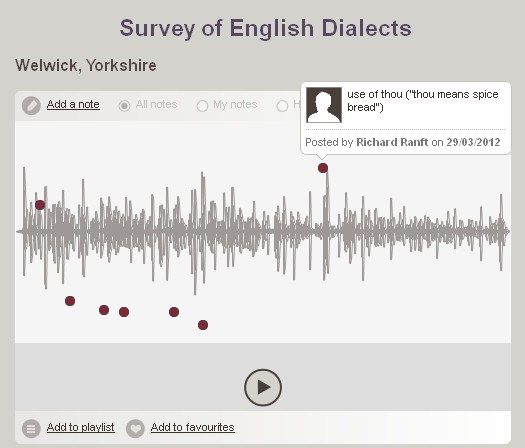 Watch this space over the next few weeks as we announce more collections that have recently been digitised and copyright-cleared for public access.

The Listening Project on BBC Radio 4 is now in full swing; you may have seen the ads on BBC TV. Here at the Library we were excited to see them and listen to the programmes for the first time, because they represent the culmination of a great deal of work behind the scenes over the last few months.

The Project aims to capture the nation in conversation: to record intimate conversations between loved ones and broadcast them to the nation. Itâ€™s oral history, but with a twist; the interviewer is a close friend or family member, and the emphasis is on relationships, on conversations rather than storytelling. Our curator Jonnie Robinson talks about this in more detail on the BBC Radio 4 blog.

Thereâ€™s been a lot of press coverage of the Project. One of my favourites was an article in the Guardian on â€˜the art of eavesdroppingâ€™ which sparked an entertaining discussion in the comments section about overheard conversations. But, of course, these conversations arenâ€™t overheard; they are recorded in a local BBC Radio studio, or uploaded by listeners. So rather than the often unintentional humour of everyday chitchat, the subject matter is rather serious; conversations cover loss, aging, illness and terrorism. What is refreshing is that, despite the subject matter, the speakers are largely optimistic. The emphasis is on getting on with life despite their difficulties.

The Library will receive the first batch of recordings for archiving this month, and weâ€™ll be posting some comments on the material that has been collected, and some thoughts about how it could be used by researchers, teachers and writers.

The first few programmes have now been broadcast and there are lots of recordings on the BBC website to listen to, or you can download the podcast.

Find out more about our involvement in the project