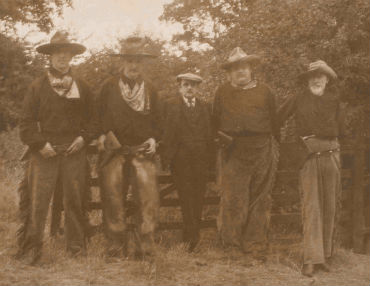 What a wonderful image this is. It features in the British Library's new Writing Britain: Wastelands to Wonderlands exhibition, on the relationship between British writers and British landscape, but in truth it stands alone. It shows, from left to right, Lord Howard de Walden (author and philanthropist), the drama critic William Archer, J.M. Barrie, G.K. Chesterton and George Bernard Shaw. They are dressed as cowboys, having paused for a while  during the making of a film, later entitled How Men Love. The director was the playwright and theatre producer Harley Granville-Barker, the year 1914.

There's so much to see. Firstly there's the sheer oddity of seeing members of the British (and Irish) literary pantheon dressed as cowboys. There's the collision of cultures, British and American (the idea of the Wild West brought to Britain first by Buffalo Bill Cody's shows and then by the early cinema). There's the coming together of (supposedly) low and (equally supposedly) high culture in the marriage of cinema and literature. It's an image that tells of a point where intellectualism met mass culture (so acutely documented by John Carey in The Intellectuals and the Masses), and found itself confronted by a new world where it no longer understood the rules of the game. The joke, they hoped, was on the cinema, but the joke ended up being on them. I could even read it as a metaphor for our slowly emerging plans to introduce moving images into the august temple to the written word that is the British Library.

I've written about the production of How Men in Love in detail on my Bioscope blog (on early and silent cinema). So, briefly, the film was part of an experiment in stage presentation by J.M. Barrie, who was intrigued by the inter-relationship between film and theatre. He set up an event in July 1914 entitled 'The Cinema Supper', to which many of London's great and good were invited, and in the middle of it staged a argument between Shaw, de Walden, Chesterton and Archer, the later three ending up chasing Shaw off-stage while bearing swords. The second part of the entertainment was to be a cowboy film, into which the men would have been transported from their live presence on the stage. Chesterton writes about its production - which took place the following day - in his autobiography:

We went down to the waste land in Essex and found our Wild West equipment. But considerable indignation was felt against William Archer; who, with true Scottish foresight, arrived there first and put on the best pair of trousers … We … were rolled in barrels, roped over fake precipices and eventually turned loose in a field to lasso wild ponies, which were so tame that they ran after us instead of our running after them, and nosed in our pockets for pieces of sugar. Whatever may be the strain on credulity, it is also a fact that we all got on the same motor-bicycle; the wheels of which were spun round under us to produce the illusion of hurtling like a thunderbolt down the mountain-pass. When the rest finally vanished over the cliffs, clinging to the rope, they left me behind as a necessary weight to secure it; and Granville-Barker kept on calling out to me to Register Self-Sacrifice and Register Resignation, which I did with such wild and sweeping gestures as occurred to me; not, I am proud to say, without general applause. And all this time Barrie, with his little figure behind his large pipe, was standing about in an impenetrable manner; and nothing could extract from him the faintest indication of why we were being put through these ordeals.

The full stage-and-film fantasy was never completed, because some of those featured in the Cinema Supper (including prime minister Herbert Asquith) objected to having been filmed without their permission. Chesteron says that the cowboy film was never shown, but two years later it was screened, as part of a war hospital charity event at the London Coliseum on 10 June 1916, where it was given the glorious title How Men Love. How glorious it would be if it still survived, but alas the last record we have of it still existing was in 1941. But maybe, in some attic or basement somewhere...

Writing Britain has more to lure you in than just this one image. It is a poetically-composed analysis of how place influences art, and it is full of surprising and imaginative choices of publication to illustrate its thesis. The exhibition also makes quite interesting use of film, with Pathé newsreel footage projected onto wavy white cloths and accompanied by a haunting soundscape giving a suitably atmospheric background to the section of the influence of wetlands and the seaside.

Writing Britain runs from 11 May until 25 September 2012, and there are booking details, events information, a mapping game and exhibition blog on the website.

Look how small JM Barrie is!

Hi Luke. Great read, nice story. The image looks like the alien and the cowboy old sketch that i saw in google search.