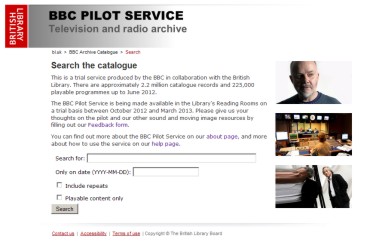 Today, 1 October 2012, sees the piloting of the British Library's moving image services. We've provided access to our specialist moving image collections as an appointment service before now, but from today we are offering two new, instant access services for anyone researching in one of our Reading Rooms (at St Pancras, Colindale or Boston Spa) and special access to a huge television and radio database. In combination with our existing sound collections we can provide instant access to nearly a million sound and moving image items onsite, supported by data for over 20 million sound and moving image recordings.

The three services are:

This is a trial service produced by the BBC in collaboration with the British Library. It brings together the BBC's programme catalogue, Radio Times data and BBC television and radio programmes recorded off-air from mid-2007 to the end of 2011. There are approximately 2.2 million catalogue records and 190,000 playable programmes, both television and radio. The Pilot Service is being made available in the Library's Reading Rooms on a trial basis between October 2012 and March 2013, and users should look on the catalogue as a platform on which we hope to build further services in the future.

This service provides access to daily television and radio news programmes from seventeen channels (fifteen TV, two radio) broadcast in the UK since May 2010, recorded off-air by the British Library. The programmes will be almost instantly available, with new programmes available in our Reading Rooms within hours of broadcast. We currently record forty-six hours per day, including BBC, ITV, Channel 4, Sky News, Al-Jazeera English, NHK World, CNN, France 24, Bloomberg, Russia Today and China's CCTV News. Many of the programmes come with subtitles, which we have made word-searchable, greatly enhancing Broadcast News as a research resource.

TRILT is a database of all UK television and radio broadcasts since 2001 (and selectively back to 1995). It covers every channel, every broadcast and every repeat, some 15 million records so far and growing by a million per year. Produced by the British Universities Film & Video Council (BUFVC) it is regularly used by many universities but has never before been available to general users. 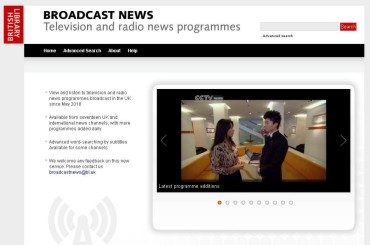 For reasons of copyright and licence, the three services can only be made available in our Reading Rooms for registered British Library users. The sound and moving image items can be accessed at dedicated multimedia terminals (equipped with non-sound leakage headphones) of which there will be at least one in every Reading Room. We're starting with twenty-five terminals and will soon raise this to sixty. Eventually - if things develop as we hope they will - every terminal that we provide for users in our Reading Rooms should be equipped for multimedia access.

To find the services, just follow the link to Sound and Moving services from the front page of any Reading Room terminal - but remember you'll need to pick one equipped with headphones to hear any of it (you can't plug in your own headphones, please note).

We are keen to have feedback from users, and you will find a link to a survey at each of the multimedia terminals. Do fill it in and let us know your thoughts on the services and how you think we can be developing things further.

We have more in the pipeline, not least the first fruits of our film and video digitisation projects, but that you'll be seing in the new year, when we will formally launch the new sound and moving image services. For now we're putting them out for a test drive - and we'd love to know what you think.

There's more information on all our moving image holdings and services on the Library's Help for Researchers pages.

This looks/sounds fantastic - can't wait to give it a try ...

I'd love to have your thoughts on the service when you have.