On ITV's Great Night Out last week (episode 3, 25.01.13) the character Hodge handed his mate a birthday card and said Happy Birthday Glynster. Unremarkable perhaps but this coincided with the recent launch of Partridge Slang Online and the publication of the 2nd edition of the wonderful 'New Partridge Dictionary of Slang and Unconventional English'. Eric Partridge's original slang dictionary (first published in 1937) ran to 8 editions culminating in 1984 and is rightly acknowledged as the definitive record of 20th century British slang. The New Dictionary (edited by Tom Dalzell and Terry Victor and now in its 2nd edition) maintains the tradition impressively, enhanced by a more conventional approach to citing published sources and a broader focus to include examples of non-mainstream vocabulary worldwide, albeit restricted to usage since 1945.

The New Dictionary intentionally omits many of the traditional British nicknames Partridge included in earlier versions. Generally attributed to Forces slang, many of these gained more widespread currency such that people my age (born 1964) probably know the odd Smudger (surname Smith), Nobby (surname Clarke), Chalky (surname White), Lofty (anyone considered unnaturally tall or indeed unusually small) or Curly (anyone bald or with straight hair). Given that many of these nicknames are now less common, it's perhaps not surprising they're no longer considered worthy of inclusion. Nonetheless, some clearly remain sufficiently alive in the public consciousness to warrant mainstream cultural reference - witness Lofty Holloway (EastEnders, 1983-1985) and Curly Watts (Coronation Street, 1983-2003). This speaker recorded by the BBC in 2004 in Filey, North Yorkshire also demonstrates continued awareness among speakers of a certain generation:

Editorial decisions about what to exclude must be a lexicographer's nightmare, but given Partridge's reputation I wonder whether it might be possible in future editions to reconsider entry criteria for nicknames. I've been keeping records for some time and my own data suggests a tendency nowadays (more common among males?) to derive nicknames by adapting surnames. What's intriguing is that there appear to be morpho-phonological (and sociolinguistic) principles at play. Here, with well-known examples from the sporting and broadcasting world, is a selection of productive processes in widespread use in the UK according to my observations.

2. Polysyllabic surnames can either:

More recent innovations (arguably emanating from the USA?) include:

4. definite article + initial letter + the suffix <-dog> - one of my daughter's teachers whose surname begins with <P>, for instance, is affectionately referred to as the P-dog

There are other variants and, inevitably, occasional exceptions. Olympic Gold Medallist Bradley Wiggins is, of course, neither Wiggs nor Wiggers (he attended a North London comprehensive) but Wiggo. However, anecdotally I sense there are sufficient examples that conform to the rules to support a fledgling 'theory'. Meister, ster and dog all merit entries at Urban Dictionary as do several individual examples of 1 and 2 above but only a respected authority such as Partridge could satisfactorily establish dates, precedent and social/geographic distribution. I wonder if it's time for a forthcoming edition to take note?

'In the Field' - Field Recording Symposium at the British Library

On 15th-16th February the British Library will be holding a two day symposium that seeks to open up and explore the practice, art and craft of field recording through a series of panel presentations, listening sessions and screenings. Starting from the early days of field recording, 'In the Field' aims to relate the multitude of contemporary field recording practices to their historical precedents and investigate issues in contemporary practices. These include: How field recordings are distributed to and heard by an audience; Recording the unheard; Mapping the urban; and questioning the extended nature of the field in a digital networked landscape. Participants include:

This is a joint venture between the wildlife sound section of the British Library and CRiSAP (part of the London College of Communication, University of the Arts) and is part of the Sounds of Europe project. 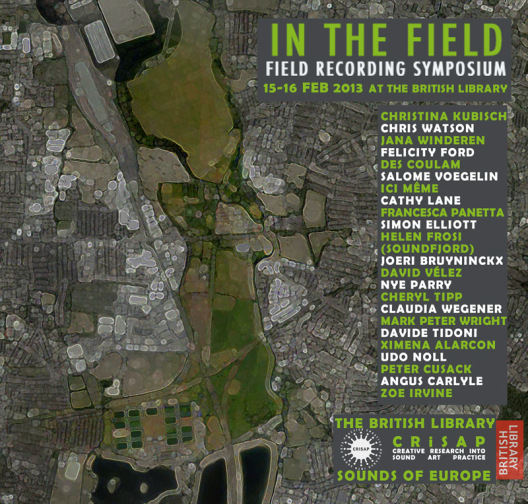 Tickets are priced at £25/£15 conc for the full two days and £15/£10 for one day. Everyone with an interest in field recording, whether professional or personal, is welcome to attend. Full details can be found here.

The Common Eider, Somateria mollissima, is a striking seabird, both visually and acoustically. With its large, angular head, short neck and plump body, this marine duck can be found bobbing around the rocky coastlines of Great Britain throughout the year. Some populations are resident while others choose to frequent British waters for the winter months only.

As with most European birds, it is the male of the species that is blessed with beautiful plumage. The jet black crown, belly and tail are enhanced by two lime green patches on either side of the neck while the white breast is tinged with a hint of peach. Female Eiders are less impressive, with a generic mottled brown appearance, but are still easily distinguishable from other seabirds due to their distinctive morphology. 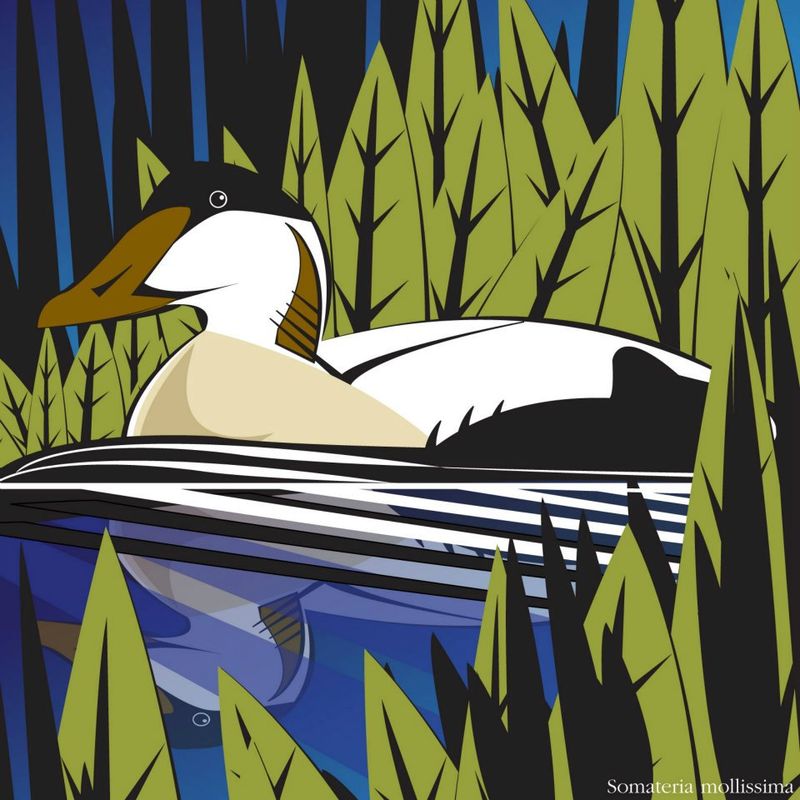 Though generally silent, the voice of the male during the breeding season is a beautiful cooing “ar-oooo”. The following recording is a typical example of this call and was made by John Aubrey Williams at Loch Beag on the Scottish island of Lewis in 1976:

As with many species, Britain’s heaviest and fastest flying duck (with a top speed of 70mph) has faced its fair share of threats. Sensitivity to coastal pollution, especially oil spills, and loss of feeding grounds due to overfishing of their preferred prey, benthic molluscs, have resulted in some local populations being vastly reduced and even lost. Despite these pressures, the Common Eider is still a relatively common sight and sound of the British coastline, if you know where to look!

More recordings of British wildlife can be found here.

Greatly saddened to hear of the passing on Wednesday (January 2) of Charles Chilton, aged 95, probably the longest surviving and most prolific of BBC radio writers and producers. Chilton began at the BBC as a porter in January 1933, then worked in the BBC Gramophone Library before taking up the producer/scriptwriter and on-air presenter roles for which he later became famous. Although he officially retired in 1977, he was still contributing to programmes and submitting programme ideas to the BBC until close to the end of his life. With the assistance of his wife and life-long professional collaborator, Penny, he finally got around to publishing his autobiography, Auntie’s Charlie, in 2011 – the last of more than a dozen books, factual and fiction, which he also found time to write over the course of his career. 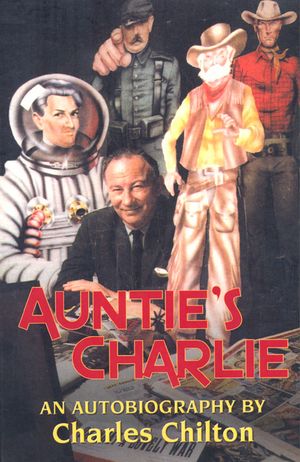 In a 1989 interview recorded for the British Library’s Oral History of Jazz in Britain, Chilton recounted in his familiar London-accented voice how, after listening in the dark to bands such as the Savoy Orpheans playing on the radio in the “terrible slum back kitchen” of his grandmother’s St Pancras home, the fourteen year old landed a job interview at the BBC:

‘I walked into Portland Place and saw them building the BBC. And it was just operating then in 1932, so I walked in and said ‘How does one get a job here?’

With foresight, Chilton deposited his personal tape archive at the British Library in 2005, where it remains a jewel of the radio collections, providing a uniquely detailed audio record of his career as producer and writer. Additionally, the many reels of untransmitted production material also give a rare insight into the programme production process and the painstaking research which lay behind every programme. Although especially renowned for such innovative and enormously popular 1950s drama serials as Riders Of The Range and Journey Into Space (a radio forerunner of BBC Television’s Dr Who), the Charles Chilton Collection also reveals him to be an underrated producer of both radio and television features on diverse themes, many with a socio-historical, literary or musical flavour. His wife Penny co-researched many of their remarkable musical documentaries – “illustrating history through song,” as Chilton put it – using the British Museum library (now British Library) music and street ballad collections. Notable examples include A Ballad History of Samuel Pepys and Dickens’ London. But his meticulously researched music hall recreations with Roy Hudd seem particularly ambitious. 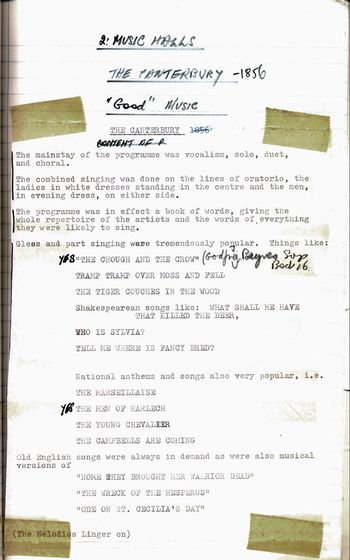 Each programme attempted to recreate the authentic sound and content of a night at a particular music hall, at a specific historical juncture, using carefully rehearsed modern singers to reproduce the style and voices of the great Victorian and Edwardian music hall stars. If you wish to discover today what it would have been like to experience an evening at a London music hall during the Crimean War, look no further than Chilton’s Songs For The Times feature The Eastern Question (C1186/2-3) or A Night at Wilton’s (C1090/1). These, along with hundreds of other Chilton productions spanning almost his entire career can be auditioned through the Library’s on-site Soundserver or via the Listening & Viewing Service.

Continuing the theme of a recent blog post (there's summat about nowt as gets us goat - 28.11.12) I was struck again over the holiday period by the difficulty of getting the dialogue right in regional and/or period drama. For most Downton Abbey fans the apparent demise of Matthew Crawley at the end of this year's Christmas special was probably the high point in terms of suspense. For me it came at 38 mins. 34 secs. when under-butler Thomas Barrow said fains I tell Mr Carson [= 'I'd rather not tell Mr Carson'].

I suspect much of Downton Abbey's success derives from its affectionate portrayal of sociolinguistic nuances between the aristocratic RP most distinctively represented by Maggie Smith's wonderful Lady Grantham and the various regional vernaculars represented 'downstairs'. The expression fains I is indeed authentic in that it is recorded from this period in authoritative dictionaries (e.g. OED online cites Compton Mackenzie's Sinister Street from 1913: he could shout 'fain I' to be rid of an obligation and 'bags I' to secure an advantage). Dig beneath the surface, however, and I wonder if such a phrase is more likely to belong to the Crawley family's linguistic repertoire than that of a local servant - presumably a Yorkshireman, although Barrow is, I sense, played by Robert James-Collier with a Manchester accent.

During research in the 1950s into children's folklore and customs Peter and Iona Opie collected a wide range of phrases used as truce terms (e.g. pax, barley), when claiming precedence (e.g. bagsy, foggy) or when avoiding undesirable roles or tasks (e.g. fains I, bagsy not me). According to the Opies (Lore and Language of Schoolchildren, 1959 p.140) fains I was pretty much restricted to private school children. Perhaps then, Barrow's use reflects the form most natural to Downton Abbey creator and Ampleforth School Old Boy, Julian Fellowes? Sound recordings made by the Opies are available online and the British Library's Playtimes website features extracts from their survey and similar studies spanning over 100 years. They capture the regional and social variation in children's playground language and offer us a glimpse of what a character like Barrow might have said in this situation. My hunch would be bagsy not tell Mr Carson.

32 new field recordings have recently been added to our online Weather collection. All were recorded by long term contributor and Wildlife Sound Recording Society member, Dr Simon Elliott. The majority of his personal archive focuses on species specific recordings but the meteorological behaviour of our planet has not escaped the reach of Simon's microphones. The following audio gems are just a few examples from the collection:

Strong wind buffeting a deer fence on the Isle of Mull, Scotland 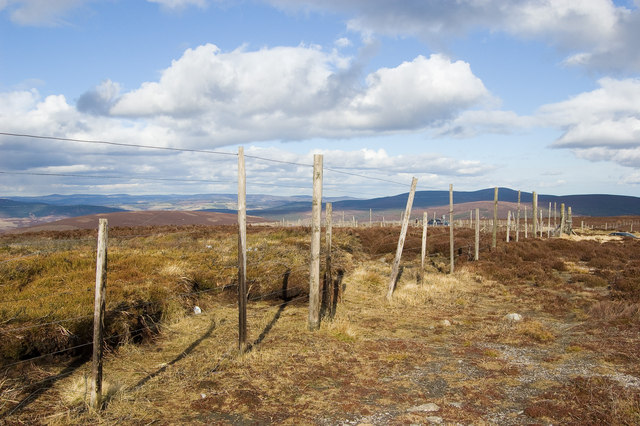 The approach of a thunderstorm 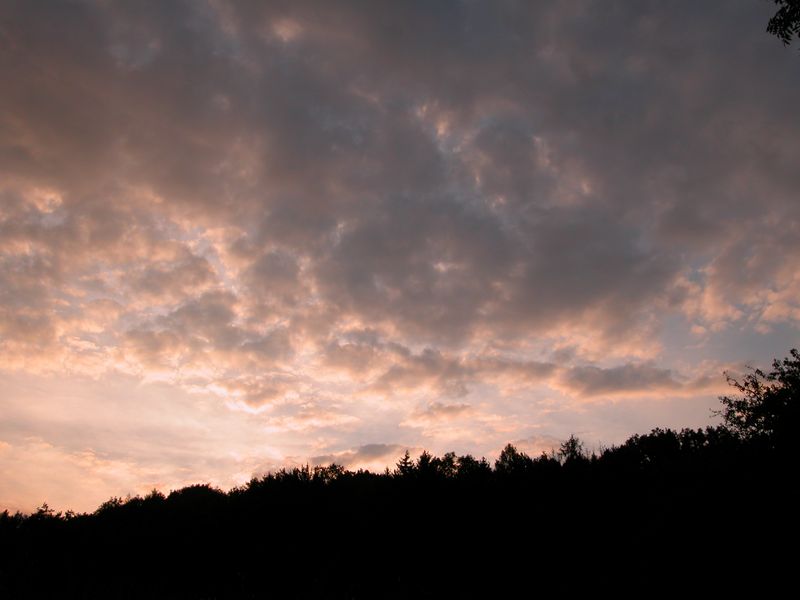 A tropical downpour on the Caribbean island of St Lucia 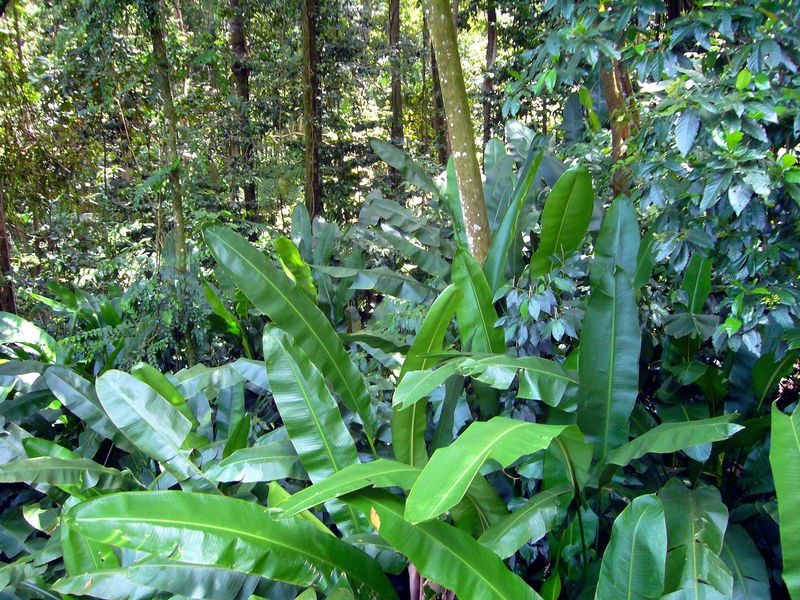 To hear more of Simon's recordings, alongside examples from other recordists, please visit Weather. We hope you enjoy these new sounds as much as we do.