I love emphatic tags, me

There was a great moment in last week's episode of Coronation Street (04.02.13) when Beth Tinker and Kirk Sutherland were discussing Kirk's sister, Maria Connor:

Kirk: she can be right stubborn, can Maria

Beth: she might be stubborn but I can charm the birds of the trees, me

This exchange illustrates two wonderful devices available in Northern English for adding emphasis to a statement by repeating information from the main clause - what linguists call an emphatic tag. The variant used by Kirk is a verb-noun tag (can Maria) where the noun (Maria) refers back to the pronoun (she) in the previous clause. Speakers of all varieties of English, including 'standard' forms, achieve the same effect with a verb-noun or verb-pronoun tag (she can be very stubborn, Maria can or she can be very stubborn, she can). Beth's use of a simple pronoun tag (me) echoes the pronoun (I) in the previous clause. Earlier in the scene Beth also used a verb-pronoun tag to express her opinion of a DVD: it's right good, is this. Sadly Jim Macdonald left the Street some time ago, but I'm sure he would have joined in, so he would, thereby demonstrating a third type of tag that was a mainstay of Jim's dialogue and is a distinctive feature of speech in Northern Ireland.

Although soap opera dialogue is obviously a creative construct it's nonetheless interesting to see which linguistic features are used to establish character and add local flavour. It's difficult to know whether the use of emphatic tags here originated from the scriptwriters or reflects input from the actors, who each boast genuine familiarity with northern dialect: Kirk is played by Salford actor Andrew Whyment, Beth by Grimsby actor Lisa George. All the constructions noted above are captured in British Library sound recordings that offer clues to the regional and social distribution of each variant:

(i) the pronoun tag appears to be particularly common among younger speakers in the north of England as demonstrated repeatedly by these Salford sixth-form students recorded by the BBC in 2005 - e.g. 0:02:03 I always clock people saying that, me.

(ii) the verb-noun tag is also typical of speech in the north of England as illustrated by this speaker recorded by the BBC in 2004 in Sedbergh, Cumbria - e.g. 0:05:25 it usually lasts about three days, does the Helm wind. Evidence from the mid-twentieth century Survey of English Dialects, such as this speaker recorded in Askrigg in 1960 - 0:00:35 it's a gift, is dry stone walling - suggests this is an older construction as examples of (i) are conspicuously absent from data collected in this study.

(iii) the Northern Irish 'so' variant is illustrated by this speaker recorded by the BBC in Lissummon in 1999 - e.g. 0:00:01 I was a back-seat passenger in a car accident, so I was.

Finally, the more mainstream noun/pronoun-verb tag (e.g. he spends a fortune on clothes, he does) seems to be present in all varieties of English. The prominence it enjoys in the BBC sit-com Gavin & Stacey (e.g. Series 1 Episode 4 - Gwen: Jason's good as gold like that. I miss him terribly, I do) suggests it is potentially more frequent or perhaps serves a particular discourse function in Welsh English.

Yaffler, Yaffingale, Laughing Bird and Yuckel are just a few of the names that the Green Woodpecker, Picus viridis, goes by. All refer to its distinctive laughing song which can often be heard ringing through deciduous woods, heaths, parks and farmland across England, Wales and much of Scotland. It is easily the largest of the British woodpeckers, sitting somewhere between a Blackbird and a pigeon, and is instantly recognisable thanks to a bright red crown and vivid green upperparts. 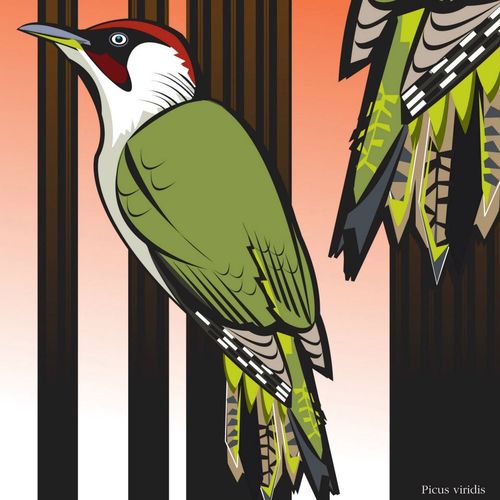 Many recordings of this species exist in the British Library. The recording featured here was made by William Pedley during the spring of 1973 in Northamptonshire, England and perfectly demonstrates the yaffle song. It just one of several hundred wildlife and environmental recordings from around the world that make up Listen to Nature.