Listening to the Active Sounds of History: field recording and museums

John Kannenberg is an artist working with sound, drawing, video, performance, writing and curation who currently lives in Chicago. His work has been presented at conferences, festivals, exhibitions, and live performances worldwide and focuses on  themes relating to the sonics of space and place, the urge to collect, the human experience of time, and the meta-processes of making and observing art itself. Since 2002, he has curated the netlabel Stasisfield. His blog Phonomnesis contains writings about sound, art, time, museums, philosophy and culture.

Memory is at the heart of much human activity. Memory drives us to collect, to record, to create documents –"information or evidence that serves as an official record" – that we then spend a lot of time and effort preserving. Some of these documents are strictly personal and kept as family heirlooms. Others end up being judged by someone else as having a broader significance, and end up being preserved in places like museums and libraries in order that they be made accessible to a wider audience. There are countless institutions around the world whose mission statements may not explicitly express it, but which are essentially dedicated to honoring the human desire to remember.

So why do I record sounds? Because I want to remember them.

The preservation of memory is also at the heart of where I often choose to make sound recordings: I collect the sounds of museums. Museums have always held a special significance for me, with their galleries filled with preserved memory-objects on display for people to look at, to learn about, to feel awe in the presence of their aura. Natural history museums let us walk through huge swathes of history in a relatively short period of time. Art museums let us sift through documents of cultural significance, canvases or papers or rocks or clay that echo the memories of the people who made them. As we walk through these places, we make our own new memories from the memories on display. 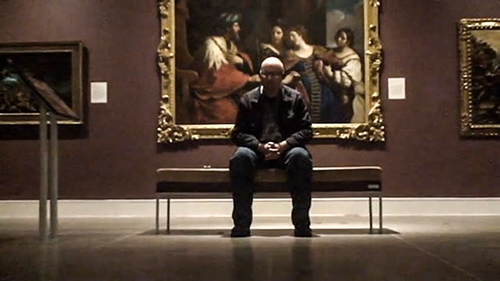 If you've been lucky enough to travel to Paris and see Leonardo's Mona Lisa, you can share in the memory of everyone else who has done this – visiting these authentic objects becomes part of a shared, ongoing human ritual, and we tend to act certain ways when we're in these places filled with memories. We try to show respect for the alleged genius on display, we blatantly ignore the wishes of the curator and flit from object to object out of chronological order without reading anything, and – most importantly of all – we tend to remain quiet. Many of us think of museums as silent spaces, as temples of looking. Listening doesn't much enter into the ritual. But what would happen if it did?

That's what I'm curious about. Not only do I find the sounds inside museums aesthetically beautiful, but I also find them conceptually interesting, even poetic. Because the sounds we make in museums are part of this shared, ongoing human ritual, I refer to what I listen to there as "the active sounds of history". These sounds are specific to institutions dedicated to memory, mixing with and reacting to these mute historical objects that draw us towards them. Paintings absorb sounds, sculptures reflect them; no matter how quiet we try to be, there is, after all, no such thing as silence. The sounds we make affect museum objects, and in turn, the objects and the architecture surrounding them affect the sounds we make. It's the sound of art being appreciated, the music of a contemporary historical memory.

A Sound Map of the Egyptian Museum, Cairo (excerpt 5'00")

Recently, I was recording sounds inside the Art Institute of Chicago, sitting on a bench and listening to the crowd gathered around the famous painting American Gothic by Grant Wood. At one point, one of the museum visitors raised their camera and snapped a picture. A synthesized sound meant to replicate the sound of an old analogue camera shutter rang out almost deafeningly: this manufactured sound, which simulates the "classic" experience of taking a photograph, radiated out and collided with this painting that preserves a time-sensitive idea about American identity and values. It was the sonic meeting of two objects of memory, a ripple in history, a hyperreal incident of authenticity in crisis, a clash of the modern and postmodern, perhaps even a perfect moment of metamodernism. Memories like these are what drive me to keep recording, to preserve what I can of my time in these places. 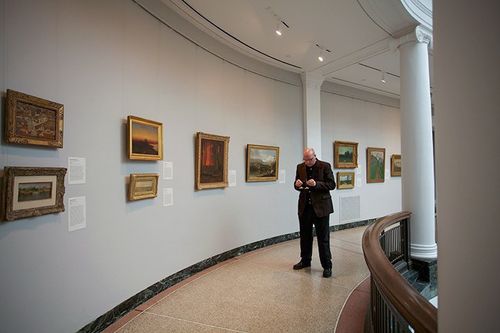 A Sound Map of the Art Institute of Chicago (excerpt 2'48")

While museums tend to collect objects, it's libraries that tend to collect sound recordings (all quibbling about whether these recordings or the sounds contained on them are actually objects themselves aside). Collections of sounds tend to be catalogued like books or writings, so that when we want to look we go to a museum, and when we want to listen we go to the library – another so-called "silent" environment.

There is a definite element of the absurd in my practice of recording the sounds of art being looked at in museums – it might almost be considered by some people as ridiculous as listening to paint dry. But if I ever wanted to push that absurdity to another level, I would start recording the sounds of sound archives in libraries. Undoubtedly there is someone somewhere who has already done this, since the practice of field recording tends to be filled with these sorts of meta-jokes that consist of recording the sounds of things that nobody ever thinks to listen to. Many phonographers tend to document sounds that aren't just in danger of being forgotten, but which are downright ignored in the first place. This somewhat working-class attitude of sticking up for the "little sounds" appeals to me: I want these tiny, forgettable sonic events to have their chance at becoming someone else's cherished memory.

A copy of John Kannenberg's field recording-based composition A Sound Map of the Egyptian Museum, Cairo is held at the British Library (call number 1SS0007419) – a perfect encapsulation of everything the above essay attempts to discuss.

See also the recordings made by Frederick Bell in 2009 at the National Gallery and Serpentine Gallery, London, and the Musée du Louvre, Paris. British Library catalogue entry here: http://cadensa.bl.uk/uhtbin/cgisirsi/x/0/0/5?searchdata1=CKEY7678408