A Life with Sound

Simon Elliott has recently retired after 35 years in the NHS, building an international career in medical ultrasound scanning and technology. He has been an active member of the Wildlife Sound Recording Society since joining in 1975, and has collaborated with the British Library Sound Archive for over 30 years. He believes strongly in the role of the British Library in making the world of sound freely available for science and education.

I cannot remember a time when I was not interested in the natural world. Growing up on the very edge of Sheffield, the woods, fields and wild moorland of the Peak District were the playground of my childhood. Happy with my own company, I would potter about (I’m now approaching 60 and I still love pottering) trying to observe and get close to birds and animals, learning fieldcraft skills that are useful to this day.

Then, in the late Sixties, a few things coincided which cemented the path to my lifelong interest in wildlife sound recording: a neighbour bought me a BBC record of bird songs by Ludwig Koch, and my father returned from a business trip to the USA with a present of a very early portable cassette recorder. Naturally, I put everything together and went out into the garden to record my first bird – the song of a Chaffinch - in 1968. I was hooked. Penniless student days followed, but a successful medical career has enabled me to develop and pursue my hobby here in Britain and across the world, at all times of day and year, when those long working hours and family demands permitted. It has been a rewarding pastime, and one without limits: there’s always something making a sound somewhere, always a new recording to be made. 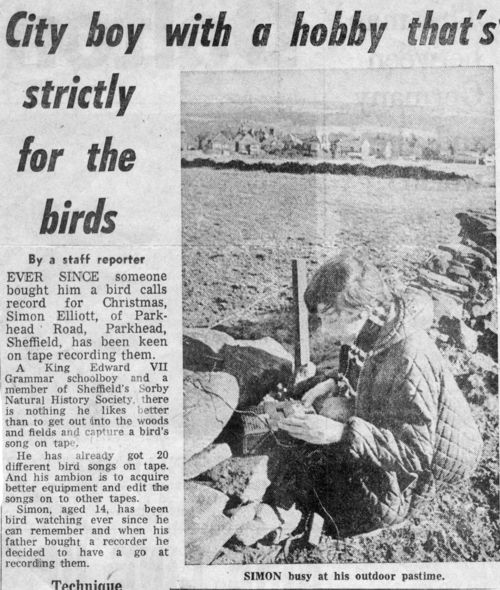 One other item was hugely influential – a little book called ‘Watching Wild Life’ by David Stephen. My original copy, here in my hand, shows that I bought it in August 1966, and I believe it is still the best and most inspiring book about fieldcraft. The author described how to get close to wildlife and study their behaviour, with amazing pictures (over which I drooled) of him sitting in a Golden Eagle nest, watching Capercaillie and Otters, or building pylon hides just to get close to crows. To me at that time these things were a dream, and it is immensely fulfilling to know that I too have now climbed into the nests of eagles (and many others) to place my mics, recorded the sounds of a wild Capercaillie brushing my mic with his wing, and the conversation of a pair of Otters basking in spring sunshine.

All these influences have led me to concentrate on recording the vocabulary of my subjects, and to work out ways of getting close to them with minimal disturbance. I set out to record their conversations, without them knowing that I and my equipment are there. This can create enormous practical difficulties, like trying to record bird calls in close up on a wave swept shore, placing a mic 20 metres up a pine tree in an Osprey nest, abseiling down to a Peregrine nest, or wading out into an icy lake in the dark to record wildfowl. But it is so much fun, and although I’m often content to sit and record any sound around me, such as waves or merely wind in the trees above, really I am never happier than sitting in my hide, on the end of perhaps hundreds of metres of cable, listening in to the intimate conversations of undisturbed wild animals.

I’m fortunate to have lived and worked in the far North of England for over thirty years, with relatively quiet woodland, hills and beaches within half an hour of home. I know that I would now find it difficult to live away from the sea, for this constantly changing coastline always has something to offer the sound recordist. When inland areas are quiet, even in the middle of winter our coast is alive with migrating or wintering birds, often providing spectacular but challenging opportunities. And if not there, I’m likely to be hidden away in a wood or by a lake in deepest Northumberland, day or night.

Far from home, my favourite locations must be the Pacific Northwest of Canada and the USA, for its wonderful forests, mountains and sea life (or should I say seafood); equally, pretty much anywhere where there’s a Frigatebird soaring overhead will do, for the Tropics offer an intoxicating mix of sun, sea, and wildlife. There are sounds which take me straight back to these places, like the wistful rising song of a tiny Swainson’s Thrush in British Columbia, the penetrating calls of a solitaire in a Caribbean rainforest, or the ghostly nocturnal wailing of Wedge-tailed shearwaters in their burrows on a cay on the Great Barrier Reef.

So why be a wildlife sound recordist, especially when the cameramen get all the credit? It’s over 120 years since Koch made the first recording of a singing bird, yet few people today know what we do or even that we exist, and it’s still regarded as ‘a bit unusual’ even among serious naturalists. Well for me, it has taken me to six continents and to some memorable places, and to be on location at the best time for recording forces me to be out there when no-one else is about, when everything else is (hopefully) quiet, and then be privileged to see and hear events and behaviour that few other people have seen, or more importantly, have heard. 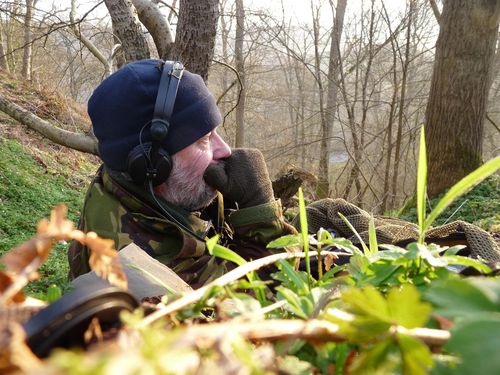 A selection of Simon's recordings can be found in the Environment and Nature section of British Library Sounds. Recordings have also been used on British Library audio publications including British Mammals and Wild Scotland.  For a complete inventory of Simon's archived recordings, please visit the Sound and Moving Image Catalogue.