British Bird of the Month: Lapwing

After a few months away, British Bird of the Month heads into autumn with a stunning little wader. About the height of a pencil case ruler, the Lapwing, Vanellus vanellus is instantly recognisable thanks to its upsweeping black crest and petrol-coloured plumage. Flocks can be seen across the British Isles throughout the year, favouring farmland, wetland and meadows during the breeding season and pasture and ploughed fields during the winter months. 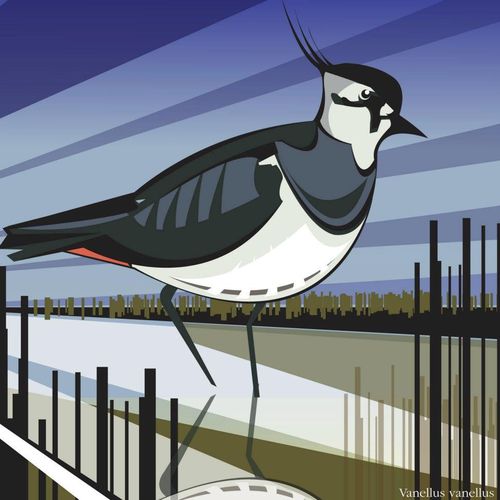 As Mark Cocker and Richard Mabey point out in ‘Birds Britannica’ (Chatto & Windus, 2005) the Lapwing probably has more surviving vernacular names than any other British bird species. Green Plover, Peewit, Chewit, Pee-wee, Teewhuppo and Peasiewheep are just a few examples. Most are inspired by the classic “peewit” call which is usually given in flight.

"Peewit" call recorded on Skokholm Island by Lawrence Shove, May 1965

The spring song is a much more elaborate affair, combining wheezing notes with the throbbing hum of whirring wings. A particularly vivid description of the Lapwing’s display flight can be found in Kenneth Richmond’s ‘Birds in Britain’ (Odhams Press Limited, 1962).

“In early spring its crazy, tumbling flight over the territory is a joy to watch as the bird sweeps drunkenly up and down, so low at times that it threatens to dash its brains out on the bare earth, lurching up at the last moment and filling the air with its wild crying”.

The following recording, made in Herefordshire, England in 1974 by Victor C. Lewis captures this combination of the aural and the mechanical.

As with many farmland birds, such as the Skylark and Corn Bunting, the Lapwing has struggled to adapt to modern agricultural practices and the species has suffered steep population declines in recent years. Organisations such as the RSPB are working to counteract these declines through better habitat management, the lobbying of government and encouraging nature-friendly farming so that this wading bird remains a signature sight and sound of the British countryside.