Revealing the Hidden Beauty of Birdsong

In 2010 the British Library released 'Secret Songs of Birds', a CD featuring the slowed down songs of 24 birds from around the world. The elaborate warblings of species such as the Skylark, Grasshopper Warbler, Grey Fantail and White-winged Fairywren were placed under the acoustic microscope and manipulated to reveal a level of detail not normally detected by the human ear. The process of slowing down bird sounds is by no means a new one. In the late 1950s Musical Director of CBS Radio in the USA, Jim Fassett, began experimenting with the speed and pitch of sound recordings and would showcase his results on his Sunday afternoon radio programme ‘Strange to your Ears’. Fassett is perhaps best known for his work ‘Symphony of the Birds’ which was created entirely from manipulated North American bird recordings. Together with CBS technician Mortimer Goldberg, the two men carefully re-recorded fragments of field recordings at varying speeds and then superimposed these altered sounds onto a single tape. The final composition has a strange, ethereal quality that embraces the ideals of Musique Concrète and manages to bridge the gap between the natural and the artistic world. In 1960 Columbia Records released an LP version of ‘Symphony of the Birds’ along with another of Fassett’s creations ‘A Revelation in Birdsong Patterns’. This comprised a selection of individual songbird recordings that had been slowed down in order to reveal the intricate patterns and subtle variations that are usually concealed from the human listener.

Dr Peter Szöke, a Hungarian scientist and musicologist, also experimented with the speed of bird vocalisations. ‘The Unknown Music of Birds’ was released in 1987 and featured recordings of birds from around the world. Szöke strongly believed in the concept of avian music and used the voice of opera singer János Tóth to support his theory. Tóth beautifully imitated the slowed down songs of birds such as the Hermit Thrush and Woodlark, which helped Szöke emphasize the similarities between human music and birdsong. 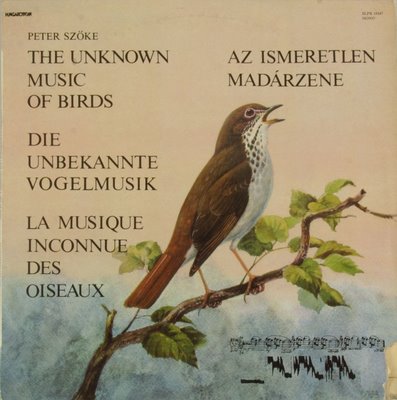 The concept of slowing down birdsong was taken a step further in 2007 when British artist Marcus Coates produced an installation entitled ‘Dawn Chorus’. Recordings of individual species such as the Yellowhammer and Song Thrush were slowed down to such an extent that human singers could successfully mimic the individual notes. These examples of human mimicry were then filmed and speeded up to match the natural speed of each bird’s normal songs. The end result was a series of films that not only transformed the human voice but also revealed unconscious movements that were comparable to the physical behaviour of specific birds.

The goal of our 'Secret Songs of Birds' project was to strike a balance between revealing the detail within a song and creating a "new" song that was interesting, pleasant to listen to, yet still retained the essence of the original composition. Through experimentation, different speeds were selected depending on the nature of the song.

In some cases, recordings were slowed to 50% of the original speed which proved an adequate reduction to allow the listener to distinguish the hidden notes and rhythm of the song. At other times, further reductions in speed were necessary to fully uncover the song structure. In all cases, the alteration of the natural speed allowed us to reveal the subtle intricacies of these songs and present them to a new audience in their full splendour.

Secret Songs of Birds is available through the British Library Shop priced £10.00