David Vélez is a Colombian field recordist, sound artist, writer and curator. He is co-founder of the field recording netlabel Impulsive Habitat and chief editor for The Field Reporter. Earlier in the year he spoke about his work at the In the Field symposium.

What first sparked your interest in field recording?

I guess it was sparked by my interest in movie scenes with little dialogue and plenty of incidental sounds. I can't pick / remember one movie or one director in particular but I guess the movies of Andrei Tarkowsky, Luis Buñuel, Werner Herzog and Wim Wenders had something to do with me recording sounds.  My interest developed further while studying documentary production and film editing and more recently when I was exploring new sources of sounds for my compositions and bought a portable recorder.

How has your practice evolved over the years? Are you still inspired by the same subject matter or has experience led to new interests and areas of investigation for you?

Field recordings always present an interesting and challenging scenario. When I started recording sounds my approach was fully formal; now after many years the subject behind the recordings and the questions I ask about the practice itself have acquired more relevance to my work. I still think this is a very aesthetic process though, where I look for sounds that have some kind of value for me.

I have worked with recordings in many different ways, from recording in rural and natural areas (focusing on capturing animal sounds and environmental acoustics) to setting up indoor situations and installations and recording them. The sounds produced in the creation of my sculptural works have also become a subject of my sound captures - an example is my release 'Unseen terror' which is based on the acoustic documentation of the creative process behind my installation 'Adrift and catastrophe'.

With regard to sculpture and field recordings I am now presenting 'La orilla' (seashore) in Sonósferas, a Sound Art exhibition in Bogotá. 'La orilla' is a performative sculpture where I use a recording from the loud and droning seashore of Palomino, Guajira and play it back in a subwoofer whose powerful vibration activates a series of objects, creating a scene of frantic tremor and destructive resonance. The creative possibilities with field recordings are endless.

Also I would like to add that right now I think it is interesting and pertinent to evaluate and question the action of recording itself, in particular the given pursuit of fidelity and accuracy. It is intriguing to explore other ways to record sounds where the correspondence to 'reality' isn't necessarily the focus; this questioning can present interesting results both formally and conceptually, as I pointed out on The Field Reporter in the review of the Patrick Farmer and Stephen Cornford release 'A measure of ground'. This is a great example of media exploration.

Much of your published work comprises field recordings that have been manipulated in some way. In contrast, your 2012 3Leaves release El pájaro que escucha (The Bird that Listens) focuses on the natural sounds of the Colombian rainforest. Why did you decide to present these recordings in their original form?

When I traveled to Palomino (where this work was recorded) I brought with me the book 'The inhuman' by Jean-Francois Lyotard. The book centers on the question of whether there is going to be a thought that will regard the imminent future death of the sun. This book had a big impact for me, and the Palomino environment turned out to be a great mirror to reflect the thoughts and emotions prompted by reading it. Although I was just looking to record birds, the incidental droning sea waves and other external elements gave the recordings some sort of sinister nature which later became the emotional axis of the release. This material made me question my role as composer, encouraging me to avoid heavy post-production processing and instead present a more documental work where my role was more about pointing out things and being a proper medium, rather than manipulating sonic matter which was what I was doing for years.

You co-curate the widely acclaimed netlabel Impulsive Habitat which publishes a wide range of field recording-based works. How do you envisage the label developing over the next few years and are there any particular projects you would like to explore?

Overall I try to set easy basic goals: keeping the label running in the way it has been running over the past two years would already be satisfying enough. We release a new work almost every two weeks and the scouting and publishing process demands plenty of time and effort from the team. We constantly focus on publishing unheard sounds, unheard artists and unheard approaches and fortunately this has led us to encounter new ways in which to do the things we do.

You play an active role in promoting field recording in Colombia through workshops, lectures and listening events. Why is this so important to you and do you see an emerging community gradually taking shape?

The sound art and composition fields in Colombia are at a very interesting moment right now: you have young surging artists and established artists working and presenting their work together in the many spaces and platforms that are either created for or turning their attention to creative sound manifestations. I think this mixture of generations, in addition to a mixture of creative processes that range from the more academic to the more empiric and from the more visual end of sound art to the more musical approach of composition, is what is helping make the local sound art 'scene' interesting for the audience.

I have to mention certain people that are working very hard in promoting sound art and composition such as curator, composer and sound artist Ricardo Arias in Bogotá who organises events and curates exhibitions that draw plenty of interest and attention. Also I'd like to mention composer Miguel Isaza in Medellín who builds digital platforms and communities that publish sound releases and create / link content of interest.

This year on Impulsive Habitat we have been putting emphasis on publishing works by artists from places where the recording-based compositions haven't received enough global attention and Colombia just happens to be one of those places.

Last month I directed a series of phonography workshops in rural areas of Quindío. It was a great experience to see people of different ages and backgrounds getting involved in the listening and compositional process and being capable of producing interesting documental material by themselves. Sound art and composition are not easy practices to encourage in a place with such a visual and mainstream musical culture such as Colombia;  sound presents a very powerful experience though, so once a person has dug sufficiently beyond the surface of things, they will find meaningful forms there. 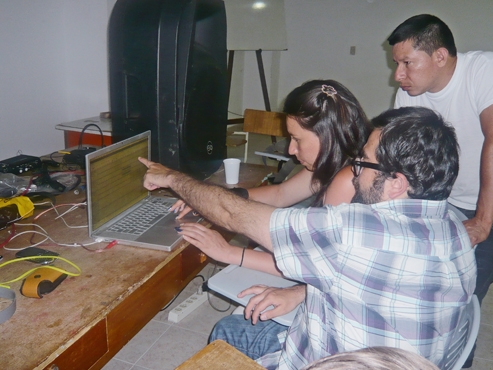 In a different aspect Colombia has an enormous biodiversity but the economical policies, in particular the uncontrolled developing of the mining industry, are threatening these bio-diverse environments giving some political and poetical sense to the action of recording these environments.

I have worked with photography, video documentation and phonography over the years but phonography is clearly the medium I have explored the most…why?

Probably because I care and worry about time. For me time is a beautiful and overwhelming mystery: we can't see it, we can't grab it and still time shapes the way that every single moment appears to us.

Sound is the medium that better imprints the mysterious presence (or absence) of time, in part because sound is also invisible, intangible and equally mysterious. Sound potentiates our imagination, activates our memory and reaches into our emotions in unique and powerful ways.

Sound connects us with our surroundings through some sort of streaming process that allows us to perceive simultaneity, change and motion in a more 'realistic' way than we could ever perceive it through the visual experience. Likewise the notion of space is for me more realistically perceived through reverberation and resonance than through visual perspective.

Sound travels at 1.236 km per hour, light travels at 1.080.000 km per hour and electricity travels slower than light. There is always a delay, a gap, a void, a distance between the event and the beholder; a gap that, no matter how small and subtle it can be, it is always there. The future is already occurring somewhere else but we just can't sense it yet and by the time we get to sense it it will already be in the past. The present time is nothing but this gap, because the present time is completely subjective.

Recording and playing back or processing the recordings allows me to give some poetic output to the questions I make as an artist, composer and mostly as a person concerned about his own existence. Recording and giving to these recordings an artistic purpose gives to my life some existential relief knowing that in the future the world that I perceive and that I am part of won't exist anymore. 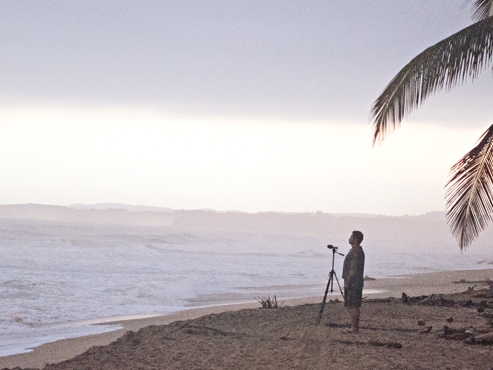 A very interesting interview. I never knew that there are people so dedicated.