A recording of Nelson Mandela’s remarkable speech delivered during the notorious Rivonia Trial of 1963-4, frequently quoted since his death last night at the age of 95, was heard for the first time in 2001 thanks to the British Library.

Speaking from the dock on 20 April 1964 during the Trial in Pretoria’s Palace of Justice, Mandela gave a spellbinding three-hour speech in his defence. Mandela (‘Accused Number One’) was charged with acts of sabotage designed to ‘foment violent revolution’.

were widely reported in print and sent shockwaves around the world, leading to worldwide condemnation of South Africa’s racial policies. Mandela escaped the death penalty, but began a life sentence at Robben Island prison in June 1964. He was not released until 11 February 1990.

In 2000, during a visit to South Africa, a chance conversation between the British Library’s Oral History Curator Rob Perks and colleagues at the South African Broadcasting Corporation (SABC) and the National Archives of South Africa revealed that rare ‘Dictabelt’ recordings of the trial existed, but that no means had been found to replay or transfer the sound. Knowing that the British Library’s Sound Archive still owned one of the rare recorders, Rob offered to make the transfers. 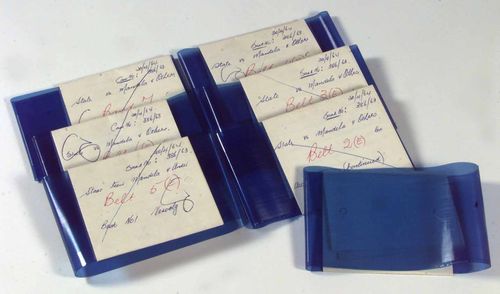 Loaned to the British Library, these dictabelt recordings are
preserved in the National Archives of South Africa

Seven of the blue Dictabelts were loaned to the British Library and later returned to the custodianship of the National Archives of South Africa who retain all copyright in them. Discovering that the belts had been recorded at lower than normal speed in order to extend the recording time, Sound Archive audio engineers Peter Copeland and Adrian Tuddenham modified the Sound Archive’s Dictabelt machine to allow correct playback speed, which could be determined from low level mains hum, inadvertently recorded onto the belts at the time. By replaying the hum at the correct pitch it follows that the recording itself was replayed at the correct pitch. They also found they had to apply heat to the belts to smooth out the creases and allow playback with minimal groove-jumping. 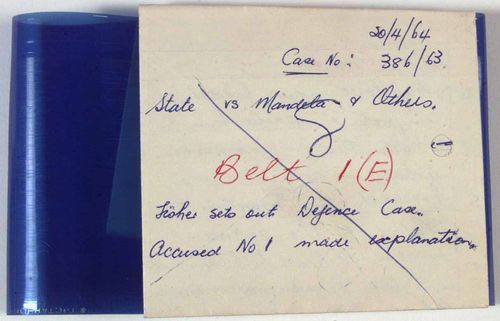 The sound was then passed to Sound Archive engineer Nigel Bewley, who corrected the frequency response, carefully edited the sound to repair the groove-jumps and the reduced the surface noise using CEDAR (Computer Enhanced Audio Restoration). The resultant audio quality is remarkably clear considering the recording technology used, allowing Mandela’s speech to be heard again for the first time since the Trial.

The Rivonia Trial of 1963-4, one of the most important political trials of the twentieth century, marked a turning point in South Africa’s history and the struggle against apartheid. Attracting huge international attention at the time, ‘Rivonia’ led to the world-wide condemnation of South Africa’s racial policies.

On 9 October 1963 at the Palace of Justice in Pretoria, Nelson Mandela, Walter Sisulu, Dennis Goldberg, Govan Mbeki, Ahmed Kathrada, Lionel Bernstein, Raymond Mhlaba, James Kantor, Andrew Mlangeni and Elias Motsoaledi - leading members of the African National Congress (ANC) - were charged under the General Law Amendment (Sabotage) Act and the Suppression of Communism Act with acts of sabotage designed to foment ‘violent revolution’ and overthrow the state. Named ‘Rivonia’ after the Johannesburg suburb where sixteen ANC leaders had been arrested in July 1963, the full trial began on 3 December 1963 and culminated on 12 June 1964 in life sentences for eight of the accused. Nelson Mandela was the last to be released on 11 February 1990 after 27 years in jail.

Listen to audio clips recovered from the 1964 dictabelts

05 Nelson Mandela; closing remarks _ it is an ideal for which I am prepared to die_

We appreciate the work done by the British Library. May I please get a detailed report or manual that elaborate on the steps taken to prepare dictabelts for digitisation. I would like to know more about the adherence to any standards or not. I need this information for scholarly purposes. Please help me.

Is it true that dictabelts are mechanical carriers but also there are magnetic dictabelts? I do not understand but need clarity please.
May I please know if it is possible to get a booklet that have all types of dictabelts and all dictabelt play back machines

I am busy with a research on digitisation if dictabelts. I wish I could visit the British Library to learn about the process of digitising dictabelts sound recordings.

Dear Nthabiseng,
Thanks for your questions. These dictabelts are mechanical carriers. There is a pretty comprehensive write-up in an issue of the IASA journal of how my British Library colleagues first rescued these iconic recordings in 2000. And fortunately all IASA journal issues have been published online in the past month on the IASA website. See "Recovering the sound from the Rivonia Trial" by Adrian Tuddenham, Peter Copeland, and Nigel Bewley (IASA journal no 17, June 2001, pp 10-17)
Online at: http://www.iasa-web.org/iasa-journal/iasa-journal-nos-16-20

The British Library digitised 7 of the dictabelts held in the South African archives. There are dozens more, and all are now being digitized in France by INA. You can find out more in September at the IASA 2015 Paris conference by attending this presentation:
http://2015.iasa-web.org/en/node/68 ("Saving South-African heritage: Rivonia trials original dictabelts digitizing").