Organisations from across Europe visited the British Library on 17 - 18 February to mark the launch of the Europeana Sounds project (more information about the project). The three-year project is being coordinated by the British Library, and we were delighted to be able to welcome all the delegates who made the journey to London, braving the typically wet February weather. 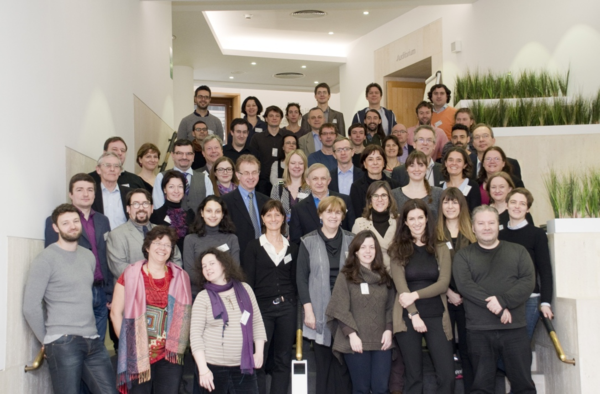 Europeana Sounds will use innovative digital technology to improve access to some of Europe’s leading collections of sounds and related material. The event was therefore an opportunity to meet face-to-face to discuss just what sort of inventive strategies will be adopted in order to enrich the audiences’ experience of the wealth of recordings that will be made available through the project’s life-span and beyond.

Many fruitful discussions occurred over the two days. Of particular interest was the issue of licensing material in order to provide as much access as possible, whilst ensuring that content providing institutions feel that the material in their custody is sufficiently protected. Indeed, in the case of recordings of ‘traditional’ or ‘ceremonial’ music that may contain culturally sensitive material, this will need to be taken into account in the same way that legal consideration must be adhered to.

Whilst there is a great deal of expertise amongst the project partners, this sense of balance could not be achieved without an engaged and enthusiastic audience. Fortunately, we will be working with the Netherlands Institute of Sound and Vision and Historypin to engage different communities and to enrich the project’s metadata through crowdsourcing and edit-a-thons. In turn, this will make it easier for end-users to find what they are looking for. This focus on usability will be augmented by the development of thematic channels on the Europeana portal, and through other digital sound sharing platforms, Spotify and SoundCloud.

Those attending the meeting were reminded of the joy of listening and of discovering new sounds by the two ‘concert’ sessions, where selected partners presented recordings from their archives.

Janet Topp Fargion of the British Library selected this recording of a Sora ancestor song to illustrate the fact that although Europeana aggregates digital objects held in European institutions, the subjects may be international, reflecting the research interests of scholars and users based in Europe.

Mairead Dhòmhnallach of Tobar an Dulchais presented 'Latha Dhomh ’s mi Buain a’ Choirce' as sung by Kate MacMillan. It is a recording of a traditional Gaelic, one of thousands that will be made available through Europeana thanks to the project.

Zane Grosa from the National Library of Latvia shared this recording, the only surviving work of orchestral music by Latvian composer Emils Dārziņš. He destroyed his other symphonic works after being accused of plagiarism, and ended his life when he was just 34, apparently throwing himself under the train.

Alexander König of the Max Planck Institute for Pyscholinguistics gave us this field recording, made in the village of Tauwema in the Trobriand Islands as part of a project to document the Kilivila language. This example serves to highlight that Europeana Sounds will work with environmental and linguistic, as well as musical, material.

Posted by Laurence Byrne at 5:02 PM