Sonic Horizons of the Mesolithic: Sounding out Early Prehistory in the Vale of Pickering

Last year we provided a range of wildlife and environmental sounds for a project investigating the soundscapes of the Early Mesolithic. Archaelogist Dr Ben Elliott recently sent us this report on the achievements of the project and what the team are planning on doing next.

My name is Dr. Ben Elliott and I am an archaeologist from the University of York. Over the past year I’ve been working alongside the sound artist Jon Hughes to explore some of the amazing animal and environmental sound recordings held within the British Library's sound archive; with the aim of producing something a little bit different.

I’m a member of a research team investigating human activity during the Early Holocene in the Vale of Pickering, North Yorkshire. During this time, groups of hunter-gatherers lived around a series of lakes and wetland environments within the Vale. Situated around one of these lakes – Lake Flixton - the sites of Star Carr and Flixton Island have provided vital evidence for the ways in which people in Britain adapted to the rapid periods of climate change which gripped Europe at the end of the last Ice Age, 11,500 years ago.

The present day Vale of Pickering looks, and sounds, very different to the landscape that these hunter-gatherer groups would have been familiar with. The lakes have become infilled with thick peat deposits, and in the more recent past these boggy wetlands have been drained to create vast tracts of agricultural land. For the past 60 years, archaeologists have been excavating sites buried and preserved within this peat, uncovering animal bones, worked wood, stone tools, and plant remains which have survived since the end of the last Ice Age. The site of Star Carr in particular is famed within the archaeological world for its incredible levels of preservation, and the rare and unusual artefacts that have been found there. 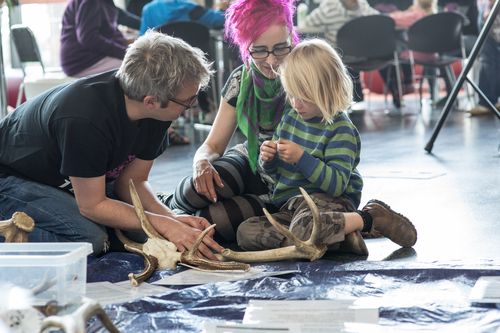 Sonic Horizons at the Festival of Ideas, York (courtesy of Ian Martindale)

Jon and I have been working with the archaeological evidence to address a simple but rather overlooked question. What would life at a site like Star Carr have sounded like in the Early Mesolithic? The rich array of finds and environmental data recovered from the site certainly provides plenty of opportunities to explore this question. By experimentally replicating prehistoric tasks that are documented within the archaeological record of the site, we began to build up an archive of the sounds of everyday activities such as flint knapping, antlerworking, paddling watercraft, firesetting, bark rolling and heating water with hot stones. We also used field recordings from the British Library to build up a database of sounds which would have featured in the contemporary environment – the calls of the birds and animals whose bones have been excavated from around Lake Flixton and the wetlands and forests that are known to have existed around this time based on ancient preserved pollen and seeds.

These recordings were then used by Jon to create a 34 minute long sound fabric, which explores the lost soundscape of the Early Mesolithic Vale of Pickering. This is structured around 16 smaller “scenes”; short narratives directly based on the archaeology recovered from sites around Lake Flixton and featuring two recurring Mesolithic characters – Jack and Amber.  This piece was mixed ambisonically, allowing sounds to be positioned in 360o around the listener, and set at variable distances to help create an eerily immersive experience. 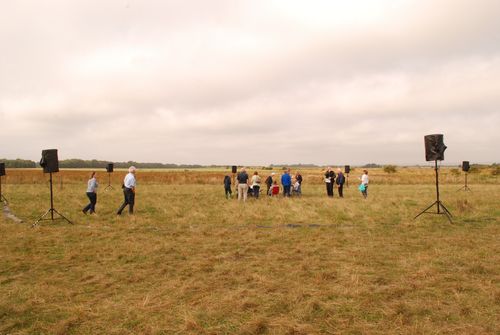 Putting the soundscape back in the landscape: open day at Flixton Island

This sound fabric was performed as a series of outdoor installation events using a large set of outdoor speakers, arranged in a 30m diameter circle to deliver a full ambisonic experience to members of the public. These events helped to transform one section of a York public gardens into a Mesolithic wilderness, provided a stimulating and strangely soothing sonic backdrop for teaching young children about their Mesolithic past, and was even used to give local residents a sense of what their present-day surroundings at the site of Flixton Island might have sounded like during the Early Mesolithic.

Our work has broken new ground in exploring the everyday character of sound in early prehistory, and has allowed hundreds of people to experience a new take on what life might have been like during the British Early Mesolithic. We’re now looking for new ways to explore sound in prehistory, and are building up a network of potential collaborators to ask similar questions in a range of new archaeological landscapes. All of this has been made possible by the British Library's peerless collection of environmental and animal sound recordings and the help of Cheryl Tipp. Together, we are working to find a new home for old sound recordings; in Britain’s ancient past.

To find out more about the project, visit the Star Carr Tumblr site. You can listen to the Mesolithic soundscape here.