David Noble is a University of Westminster graduate who has recently been cataloguing an important but little known collection of BBC Transcription Service radio features. He writes:

The Library has around 12,000 hours of BBC Transcription Service recordings issued on disc to subscribing radio stations around the world since World War II. Despite the relevance of broadcast media to a wide range of humanities and social science disciplines, the difficulty of discovering the specific subject content of larger audio collections and issues of access have resulted in the relative neglect of radio archives as primary research resources. 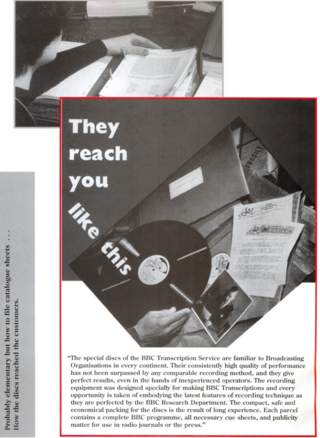 The speech to text, automated subject tagging and speaker identification tools currently being developed by BBC Research and Development, among others, may in time allow researchers to explore the content of vast digital media collections in much the same way as search engines allow users to browse the internet.

But the experience of the BBC World Service Archive suggests that in bringing radio archives into the research arena there's currently still a vital role for more traditional curating and cataloguing processes – particularly in evaluating the key subject matter.

In preparing the early BBC Transcription Service radio features for this process I experienced this first hand and found that to fully appreciate the content of a collection such as this, the most effective and enjoyable means of discovery remains the one originally intended by the producers - listening.

The BBC Transcription Service began life as Colonial Radio Programmes Ltd under the stewardship of Malcolm Frost, who approached BBC Director General John Reith in 1931 with the idea of producing programmes at a central location and distributing them, on the lines of syndicated Newspaper articles, to Colonial broadcasting stations. Initially Reith was concerned that a Transcription Service could prejudice BBC plans for an Empire short-wave service. 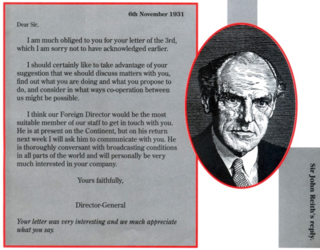 But the following year he established a department for the recording of programmes for overseas and Frost was invited to join the corporation with the aim expressed in a BBC memo as “The projection of the life, art and industry of the Mother Country”. Candidates for the fledgling service included “farming, shipping, the countryside, songs, pageants, plays and the more picturesque callings.”

Shortly after, works by acclaimed producers such as D. G. Bridson, Louis MacNeice, Charles Parker, Leonard Cottrell and Charles Chilton were also being featured, some owing their survival within the archives today to the judgment and perhaps foresight of the selectors.

Some highlights from the collection:

Station Belong You Me

The diversity of the collection is evident in Jim Leigh’s Station Belong You Me, which tells the fascinating story of Radio Rabaul in Papua New Guinea – the first station in the world to broadcast in Pidgin, the country’s lingua franca. First transmitted in 1966, it features original audio from the station, recordings of indigenous wildlife and analysis by Leigh, an Australian broadcast official and founder of the station. He describes it as a “radio experiment to bring a divided, primitive country together”, and as a vital way of preparing the people of Papua New Guinea for self-government. This programme therefore serves as an authentic document of traditional Papuan culture and language while also providing an insight into the mechanics of returning power to indigenous people in the wake of colonial rule. It’s also a curious reminder of the extent to which Western cultural attitudes have shifted since that time.

The Music Goes Round

Charles Chilton’s The Music Goes Round represents a different style of feature altogether. It explores the popular music of the 1930s, reflecting on the extent to which it represented the reality of the period and the impact of radio, talking film and the gramophone. Broadcast in 1965, the songs featured were, in Chilton’s words, “not the best music of the time” but more a reflection of the finance driven climate of the time and how this manifested itself in the style of musical output. As with much of his work, his chosen subject matter is examined in almost forensic detail in a programme illustrated with original gramophone records and songs specially arranged and performed by Alfred Ralston, conducting a 1930s style orchestra. 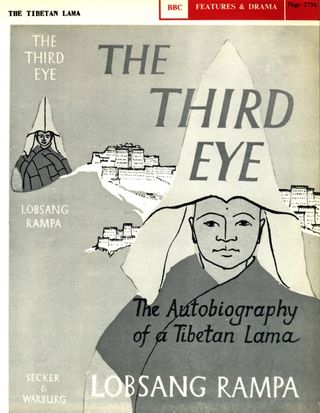 In this feature Fredric Warburg recounts the unlikely but true story of his attempt to publish the Autobiography of a Tibetan Lama in 1955. The BBC Transcription Service catalogue sets the scene:

“Little has ever been revealed about the lamas, or priestly caste, of Tibet. Did they possess or could they acquire faculties unknown to Western man? What secrets did they know? It seemed that Lobsang Rampa would be able to tear aside the veil when he agreed to write his autobiography for a London publisher.”

Warburg was convinced that the book would be an enormous success. In this account, illustrated with the voices of some of those directly involved, he documents the way in which his initial optimism gradually turned to scepticism before finally the lama’s remarkable story was proven to be a charade. Lobsang Rampa was in fact Cyril Hoskins, a plumber’s son from Devon. The duped Warburg brilliantly recounts the story of the six weeks in which he believed he was about to make publishing history through to the breathtaking moment of Hoskins’ final exposure.

Information on how to access the BBC Transcription Service (aka BBC Radio International) and other BBC Radio collections can be viewed here.