They seek him here, they seek him there: citizen science and the hunt for the New Forest Cicada

If you happen to be in the New Forest over the next couple of months, why not take part in an ambitious citizen science project that seeks to track down the last remaining individuals of a species of insect that is on the verge of extinction in the UK. The New Forest Cicada Project, developed by researchers at the University of Southampton, embraces the citizen science philosophy with its smartphone app that uses the internal microphone of your phone to scan the surrounding environment for the high-pitched calls of this most elusive of insects, the New Forest Cicada. The British Library provided recordings for the project and I spoke to Lead Developer, Dr Davide Zilli to find out more about this entomological call to arms.

What is the New Forest Cicada project and why was it launched?

We started the New Forest Cicada Project back in 2012 at the University of Southampton. We are trying to involve people in rediscovering the very endangered New Forest Cicada, an insect native to the UK that has only ever been observed in the New Forest, Hampshire (hence the name). It's actually the only species of cicadidae we have in the UK, but if you have been abroad to a warm country, cicadas will have kept you awake during the summer with their loud call. Our British cicada, however, emits a very high-pitched sound, at the upper edge of our hearing range, and for this reason it's almost impossible for adults above the age of 40 to hear it. It's also very elusive, so the best way to spot it is actually to listen to its call, if you can hear it. And that's where we come in. Modern smartphones have a very sensitive microphone that can pick up this high frequency call, so we developed an app that can help the millions of visitors to the New Forest to detect the presence of the cicada, and hopefully one day to rediscover its presence in the forest.

How does the app work?

For the user it's really easy. When you tap the centre of the screen, the app starts a 30 second "survey", recording the sound coming through the microphone. After that time, it analyses the recording and tells you immediately whether there is a cicada around or not. An algorithm on the phone looks for a specific frequency in the recording, around 14 kHz, that's characteristic of the cicada call and few other sounds. There are only a couple of other insects that the call of the cicada can be confused for, and we take those into account in the algorithm we have developed. Once the phone is connected to the internet, it will also send us a report so that we can send an entomologist for a detailed survey, should a cicada be found. We are also interested in the negative reports, as it's almost just as important to know where the cicada is certainly not present. 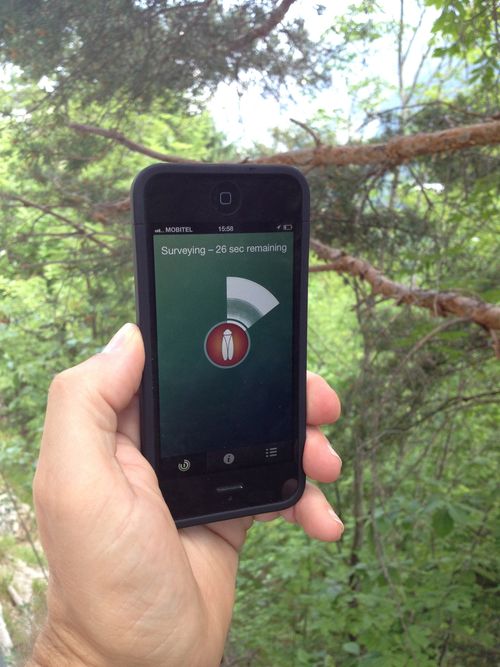 Recordings of New Forest Cicada from the British Library were used in the development of the app. Were these important and how were they used?

Absolutely. In fact one of the recordings from the British Library, which was taken in 1971 by an entomologist called Jim Grant, is still the only recording of the cicada we have from the New
Forest. We have plenty more sounds of the same species from elsewhere in Europe (some of which we recorded ourselves), but this is the only one of the actual New Forest Cicada. The sounds were used to study the features that we could exploit for our automated detection, and eventually to calibrate our algorithm to detect the cicada. 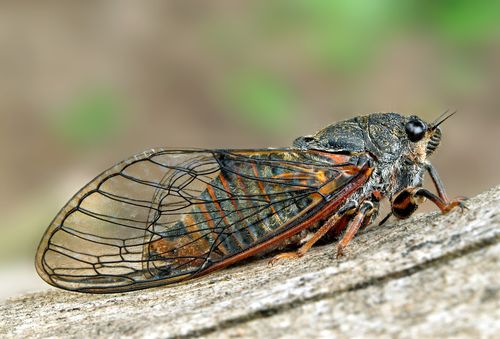 The New Forest Cicada, Cicadetta montana, the only species of cicada to occur in the UK (photo courtesy Jaroslav Maly)

How important is citizen science to the project?

The New Forest covers an area of over 600 km2 so it would be impossible for the few entomologists that are still searching for the cicada to survey it all. That's why we developed the app. The large number of visitors (13 million day-visits, according to the New Forest National Park's website) can be much more effective in surveying new sites where the cicada could have moved. This involvement of the general public in scientific research is often referred to as 'citizen science', and it's a practise that has delivered great results in a plethora of different projects. For people to get involved, however, the project must be fun and engaging, and it's great if there is a learning experience (in this case discovering about endangered species), which is what excited us in the first place.

Have you had any success so far?

Yes and no. The app was downloaded over 2000 times worldwide last year, and more than 6000 reports were submitted by users. Unfortunately none of these reports were positive, and the cicada has not yet been rediscovered. It's a great success that so many people contributed enthusiastically, but we need to continue our efforts until the cicada is found.

What improvements might you make to the app to improve results?

We are confident that the app works because we tested it in Slovenia, where the same species of cicada is still present. Entomologists are using it there for their own professional surveys too. However, we think we can do more to encourage people to participate, and to explain why it is important that we protect the environment. The cicada is evidence that citizen science is a powerful tool that can be used to tackle these sorts of problems.

Are you confident that the New Forest Cicada is still out there?

There is no real reason why it would have vanished. There have been periods in the past (for example, between the 40s and the 60s) when no one observed the insect and it was thought
to have been extinct, but was then found in different areas. Some people think that a recent change in grazing policies could have changed its environment. Enclosures around the historic sites where the cicada used to be found have prevented ponies from grazing freely, and the low vegetation where female cicadas lay their eggs has now overgrown. However, it seems more likely that the
cicada would have just moved to a different site, and it's therefore now more difficult to find. So we think that it's still around, but as the years pass it becomes more difficult to keep our hopes up.

If you would like to join the hunt for the New Forest Cicada, visit the project's website as well as your app store to get yourself ready for action. Who knows, perhaps you'll be the one to rediscover this magnificant insect?