The British Library has recently acquired  a collection of field recordings made at the Skamba Skamba Kankliai Festival in Vilnius, Lithuania. The recordings were made by field recordist and composer Yiorgis Sakellariou with support from World & Traditional Music at the British Library and the generous guidance of Dr. Austė Nakienė at the Lithuanian Institute of Folklore and Literature in Vilnius. The following text, written by Yiorgis Sakellariou himself, details his experience at the festival and features audio excerpts from the collection:

The Skamba Skamba Kankliai recording project is more so the documentation of an intense listening experience rather than the result of thorough ethnomusicological research. When I arrived in Vilnius I was mainly motivated by the curiosity to see how traditional Lithuanian music is presented and staged at a large-scale festival. My previous knowledge on the subject was fragmentary. I had recently lived in Lithuania for about a year and during that time I became interested in the country's folk music, however I never developed an organized method of collecting or documenting it. Nonetheless, it was easy to discover that there is a big variety of songs and dances and, furthermore, a long history of recording and archiving Lithuanian music.

Since 1973, Skamba Skamba Kankliai has been held annually in Vilnius, Lithuania and currrently it is organized by the Vilnius Ethnic Culture Centre. Every year the festival welcomes a large number of folk ensembles that present a wide and diverse range of traditional music. The festival also hosts international ensembles. In 2014, ensembles from Azerbaijan, Italy, Iran and Georgia assisted and performed folk music from their countries. 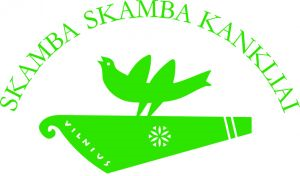 The concerts took place in several locations of the old town of Vilnius and many times they overlapped which made it impossible to record every single one. I tried to record music that was as diverse and representative as possible, documenting material on the basis of style, place of origin, instrumentation or age and gender of singers. Often the decision was purely practical (distance between stages, exhaustion, weather conditions etc.). The recordings attempt to capture not only the performed music but also the sonic atmosphere of the festival. The concerts took place in squares, parks, streets, alleys, theatres and churches and on several occasions the purely musical sounds are mixed with street and crowd noise or simply the recording location’s ambiance.

This collection can only document a small sample of Lithuania’s long musical tradition but hopefully the recordings will stimulate curiosity of listeners who are interested in world and traditional music. I do not consider the recorded material as a relic of a past that desperately tries to catch up with the present and secure a place in the future. These songs, which mostly originated in late 19th century’s rural life, are filtered through the new ideas and experiences of the people that currently perform them and afterwards through me, an observer/recordist of the performances. The recordings themselves act as another filter, substituting the physical experience of actually being present at the performance. Yet, despite the multiple layers of filters, the core of the music remains intact. My impression, or perhaps even wish, is that its truthfulness can still deeply affect the listener of the 21st century. Here are a few highlights from the festival selected and commented by Yiorgis Sakellariou.

The most significant form of Lithuanian singing is the polyphonic sutartinės (from the word sutarti meaning 'to be in agreement'). Each song includes short melodic patterns with few notes, which are sung independently following the polyphonic vocal music rules of heterophony, canon and counterpoint. On 1 June, the last day of the festival, Sasutalas folk ensemble performed a set of sutartinės at Adomas Mickevičius yard. A few children were playing games around the yard shortly before it started to rain.

This sutartinė was performed by three singers at the opening of Nakties muzika (Night Music), a concert that was set in the atmospheric Lėlė theatre late on the evening of 30 May. A mesmerized audience of around forty people was in attendance.

Earlier that day at the Lėlė theatre, Čiulba Čiulbutis (Little Bird Warbles), an event focusing on solos, duets and trios, took place. Liucija Vaicenavičiūtė is a member of the ensemble Vaicenavičių šeima (Vaicenavičius family). She sings a song about a mother who wakes her sweetest young daughter up and encourages her to go to the garden and look after their male guests.

Tatato is the ensemble of the studio of the Ethnomusicology Department of Lithuanian Music and Theatre Academy. The ensemble director, Daiva Vyčinienė, has been devoted to the spreading and teaching of Lithuanian folk music for the past twenty years.

You can listen to more recordings from the Skamba Skamba Kankliai Recording Project in British Library Reading Rooms by searching for C1661 on our catalogue. The British Library also has several CD publications documenting Lithuanian songs and music from 1908-1941 which were kindly donated by the Lithuanian Institute of Folklore and Literature. In addition, Yiorgis Sakellariou has also deposited environmental field recordings made in Lithuania at the British Library which you can find on our catalogue under collection number WA 2014/019.

Posted by Andrea Zarza Canova at 11:04 AM