Songs of the Dinka of South Sudan

The British Library has recently acquired  a collection of field recordings made in South Sudan which document Dinka song culture. Songs of the Dinka of South Sudan - Diɛt ke Jiëëŋ ne Cuëny Thudän - can now be accessed via our catalogue, by searching for C1580, and listened to online.  Dr. Angela Impey, one of the researchers on the project, has written the following text which contextualizes the research project and gives some general information on Dinka culture:

The songs in this collection were recorded for a project entitled Metre and Melody in Dinka Speech and Song, which was conducted between 2009 and 2012 by researchers from the University of Edinburgh and the School of Oriental and African Studies, University of London, in collaboration with Dinka researchers in South Sudan. The academic aims of the project were, first, to understand the interplay between Dinka song structures and the Dinka language (which distinguishes words not just by different consonants and vowels but also by means of vowel duration, pitch and voice quality), and, second, to learn more about the song tradition and the ways it has responded to the intense disruptions caused by protracted civil war. 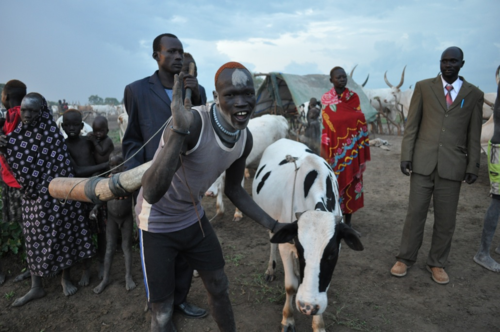 Almost everyone in Dinka society will accumulate a repertoire of personal songs during their lifetime, and most dialect groups follow a similar compositional process. Individuals who lack the ability to compose good songs will approach a talented composer in the community and commission a composition in exchange for a cow or an agreed sum of money. Occasionally a composer will be considered a talented lyricist only, in which case a second individual, who has an aptitude for good melody making, will be brought into the process. Upon completion, the song will either be taught directly to the ‘owner’, or if the owner is not a good memoriser, via a group of relatives or age-mates, who will gradually pass it on to the owner.

[In this ox song (C1580/59), Deng Jok Ajuoong, praises his ox, Mading, which he compares with an elephant. He sings about how he acquired his ox through hard work.]

Most musical structures in sub-Saharan Africa are based on highly repetitive, multi-part vocal and rhythmic interactions, and melodies are typically based on the hexatonic (six tones per octave) or equi-heptatonic scales (seven tones equally distributed across the octave). In contrast, Dinka tuning systems follow a standard pentatonic scale (five tones) and songs are composed in an extended series of linear, interconnected song-segments that follow a simple, regular or semi-regular pulse. Certain song types are accompanied by clapping, clapping sticks or a small double-sided drum (loor), and are performed either solo, in unison or in simple call-response format. The only melodic instrument played by the Dinka (apart from more recently introduced western instruments) is a 5-stringed lyre referred to as rababa. Marked aesthetic variations do occur across the dialect groups, which are likely to be the result of different social, economic, environmental and political circumstances.

[This song (C1580/6) is performed by a women's group during the war in South Sudan. It is an encouraging song about Dr. John Garang and Koryom, a battalion of the Sudan People's Liberation Army (SPLA). The women start the song by singing “The Arabs said we are afraid, how can we be afraid while John Garang is strong?”]

Apart from one book (available in British Library Reading Rooms) published on song lyrics by Francis Mading Deng in 1973, no formal research has been conducted on Dinka music. Yet songs play a fundamental role in the lives of all Dinka people, functioning as individual and social chronicles of relationships, experiences and historical events. In fact, the Dinka boast an usually complex taxonomy of songs – praise songs, war songs, songs of initiation, cathartic songs, religious songs, to name a few – each of which is defined by discernible melodic, rhythmic and performative features. Woven through all song types, however, is the poetic allusion to the interconnection between self, cattle and land or locality. As one musician explained: If you know our Dinka songs, you will know the Dinka people.