The British Library’s relationship with WOMAD (World of Music Arts and Dance) is nearly as long as the festival's existence, recording performances for archival purposes since 1985. The first recording in the WOMAD Collection, C203/1, was of the Chinese sheng and flute players, the Guo Brothers, who had recently arrived in London to study at the Guildhall School of Music and were just beginning to create a name for themselves in this country. It was made on Ampex 456 ‘Grand Master’ tape at half-track stereo and in the recordists' notes, strong winds were reported as interfering with the quality of the recording. 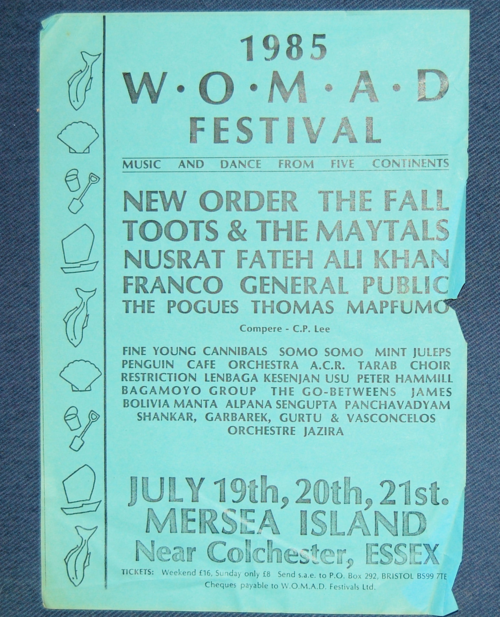 Since 1985 and each year, with the exception of three, a small team of staff from the British Library record as many of the performances as possible, including workshops and interviews. This summer, between 24 and 27 July, six members of staff attended the festival equipped with portable digital recorders and recorded ninety-one performances, covering 95% of the festival. These recordings have recently been catalogued and processed and are searchable on our catalogue. They can be listened to free of charge through our listening service on-site at the British Library in King's Cross in London and in Boston Spa, Yorkshire.

The British Library holds a significant number of early UK appearances by artists who, since performing at WOMAD, have made great inroads on the international music scene; artists such as Baaba Maal, first recorded by the British Library at WOMAD in 1991, Thomas Mapfumo, first recorded in 1990 and Nusrat Fateh Ali Khan, first recorded in 1985, to cite only a few. In total we hold around 2,100 hours of audio (you would need close to 3 months of non-stop listening to listen to it all!) of performances at WOMAD, held on different physical formats such as open reel tape, DAT, CD-R and digital audio files; all are stored in our basements and backed up digitally for preservation and access. 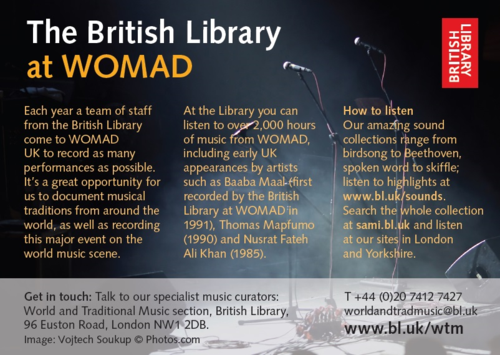 The British Library holds five million recordings on over one million items dating back to the 1890s and possibly earlier. The sound collections have their origin in 1906, when the British Museum began collecting metal masters from the Gramophone Company. Recording performances at WOMAD is one example of the many ways in which the British Library actively develops its sound collections although the majority of material is acquired through donations, purchases or loans.

Steven Dryden, Sound and Vision Reference Specialist, was a member of the WOMAD team this year. In this paragraph he relays his highlight of the festival: experiencing the live sound of DakhaBrakha, made possible thanks to Dash Arts, the creative agency which brought the group to the United Kingdom.

My highlight of WOMAD 2014 has to be ‘Ethno Chaos’ founders DakhaBrakha - brooding, shamanic ‘noisescapes’ from Ukraine. The Siam Tent filled to capacity throughout the four piece set, the atmosphere building and building with each song. The sound is eclectic, in the truest sense of the word; there is a traditional folk element but also, dance, hip-hop and tribal rhythms. The songs often build to terrifyingly claustrophobic dins, but remain rhythmic and chant like - just as the ‘Ethno Chaos’ tag might suggest, there is a lot of beauty in this chaos. One couldn’t help but reflect on everything that has happened in the Ukraine in the last year. Perhaps DakhaBrakha are capturing the zeitgeist of a generation of Ukrainians? The performance is swamped with pride, Ukrainian flags are featured on stage and amongst the audience. But there is something more here, the sound of the four piece is defiant and confident, totally uncompromising between the past and the future sounds of the Ukraine. This band sucks you in to their world of noise and forces you to contemplate, all while moving your feet.

Listen to an excerpt from DakhaBrakha's performance

Bernie Krause's talk at the Society of Sound Stage was an inspiring complement to the numerous musical performances I recorded at WOMAD: The Good Ones, Monsieur Doumani, Aar Maanta, Siyaya, Amjad Ali Khan, Mulatu Astatke, Kobo Town, Magnolia Sisters, amongst others. In his talk, the bio-acoustician and founder of Wild Sanctuary, an organization dedicated to recording and archiving natural soundscapes, invited the audience to reflect on the origins of music by suggesting structural relationships between what he identifies as the three layers of the soundscape - the geophony ('non-biological sound that occurs in the natural world'), biophony ('all of the sounds that animals create collectively in a natural wild environment') and the anthrophony ('all the human noise we create'). Using spectograms and audio recordings from his personal archive and recordings of the BayAka Pigmies made by Louis Sarno, his points were made audible.

Listen to an excerpt from Bernie Krause's talk

As ever, it is difficult to pick out the highlights of WOMAD – there is so much to see, hear, taste and enjoy even though we are working - but Manu Dibango has long been a personal favourite on record so it was great to see him live and Richard Thompson’s late-night set reminded me what a great guitarist and songwriter he is. Ibibio Sound Machine played a storming set on Saturday afternoon and Youssou N’Dour was as classy as ever that evening. Sunday brought my favourite band of the weekend – Les Ambassadeurs, the reformed band led by Salif Keita who revisited their 1970s blend of afrobeat, funk, jazz and soul in an all-too short 75 minutes of aural pleasure.  And in a contrast of style the final performance of the weekend was a blistering set by Public Service Broadcasting (probably the first band to have played both the British Library Entrance Hall and Womad) who enthralled a packed Siam tent and drew proceedings to a close. It didn’t rain either.

Listen to an excerpt from Public Service Broadcasting's performance

Get in touch to listen to performances from WOMAD on-site at the British Library and listen online to sounds from World & Traditional Music and Pop Music online! See you next year for WOMAD 2015!

Posted by Andrea Zarza Canova at 11:11 AM

ALSO; it might be helpful to clarify exactly which year/s the highlights menitoned were? It reads as if all the acts listed performed at the same festival which would place the occasion he is referring to as after 2009, the year Public Boradcasting Service were founded.