The British Library Centre for Conservation contains a number of transfer studios in which a small but dedicated band of audio engineers are employed to convert at-risk analogue formats to high-resolution wav files, wav files being the Library's archival medium of choice for audio material.

Veteran audio engineer Tony Harris has the daunting job of processing the 'Bishop Sound' collection: hundreds of reels of tape and more than 3000 fragile lacquer discs that have been in the collection for several decades. 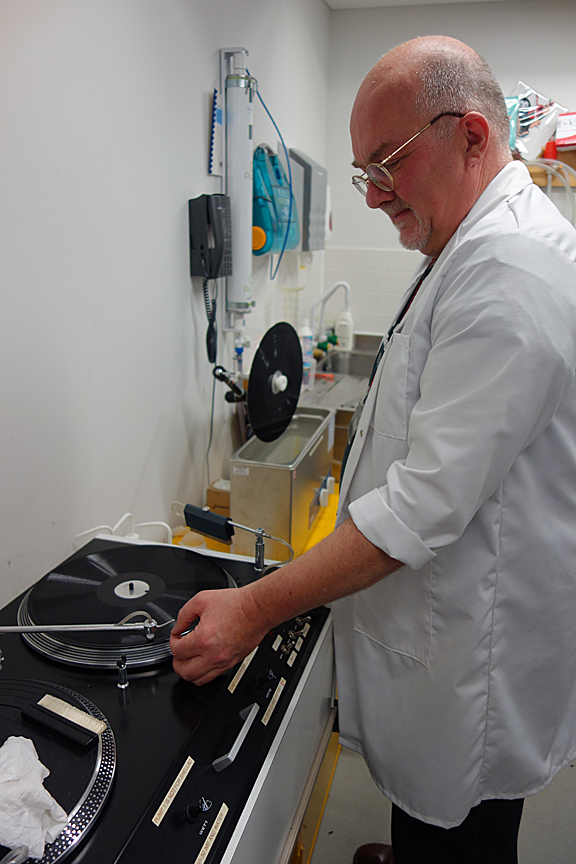 It is a long time since the collection was paid any serious attention, and the received wisdom was that the recorded contents consisted solely of sound effects for theatre and film, probably made in the 1940s and 50s.

While this is true - there are literally hundreds of discs, tapes and even 3" tape loops of short sound effects - we were unaware that the collection also included a fascinating series of recordings related to post-war British drama.

There are several excerpts from the BBC Radio Home Service programme The Critics, for example, in which Malcolm Muggeridge and others review the post-war arts scene.

Perhaps the jewel in the crown so far though is a live location recording of Noël Coward recorded speaking to the audience at the Lyric Theatre, 22 July 1947, following the first London performance of his play Peace in Our Time, an alternate reality story set in a Britain which had lost the Second World War. (The play is getting a rare revival next year to mark 70 years from the end of the war.) 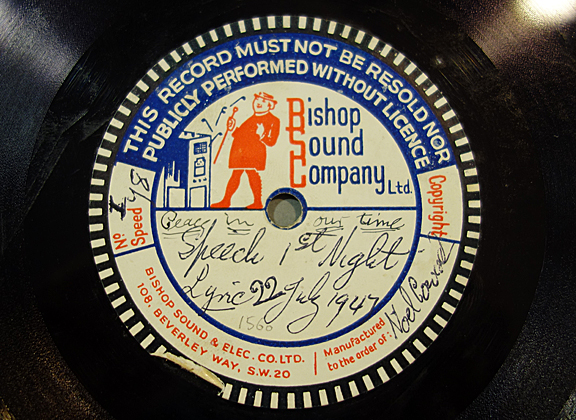 Noël Coward lacquer disc produced by Bishop Sound. The inscription suggests the playwright may have commissioned it personally.

In his diary for that night Coward wrote:

First night Peace in Our Time: I haven't heard such an enthusiastic noise in the theatre for many a year. After this cosy little triumph, Binkie gave a party, which was lovely. Got home late but happy. It is a bloody good play.

Click the link below to hear for yourself this 'enthusiastic noise', and Coward's typically elegant speech of thanks.

Listen to Noel Coward's speech at the Lyric

Recording used with permission of the Noël Coward Estate.

Arts, literature & performance, Save our Sounds