BBC Radio 4 Extra this week re-broadcast a 53-year old radio feature considered by some to be the single most influential radio programme of the 20th Century - Charles Chilton's 1961 classic The Long, Long Trail. Drawn from the radio archive of the British Library, the programme which served as both inspiration and model for long-running stage musical Oh, What a Lovely War! can be heard for the rest of this month on the BBC iPlayer, along with an Archive on 4 retrospective on the programme and its enduring impact. 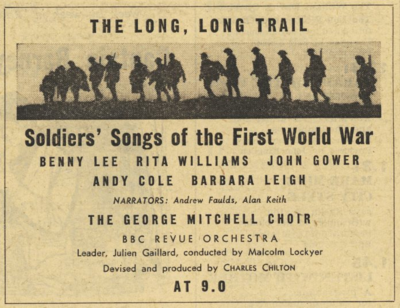 Chilton's study of the Great War was notable in its day for largely eschewing the bias of both offically sanctioned political accounts and selective publisher-mediated histories of the 'great and good'.

Instead, inspired by his own search for the truth about his father, who died at the Front aged only 19, he evoked the experiences of ordinary rank and file soldiers and the feelings of their families through the true songs of the trenches and homefront.

Just as soldiers on their way to the Front collectively confronted and managed their fear through spontaneous bursts of group song, Chilton articulated the disturbing narrative through the same musically light-hearted but lyrically chilling songs of futility.

Along with his researcher/scriptwriter wife Penny, Chilton found that the flippant, occasionally crude songs, delivered with cheery abandon by men on the way to being ‘burned, gassed and blinded’, could be a more effective way of conveying the madness of war - as in the inane mantra with which the troops replied to the question all men asked themselves on arriving at the trenches - what on earth are we doing here? The musical response: 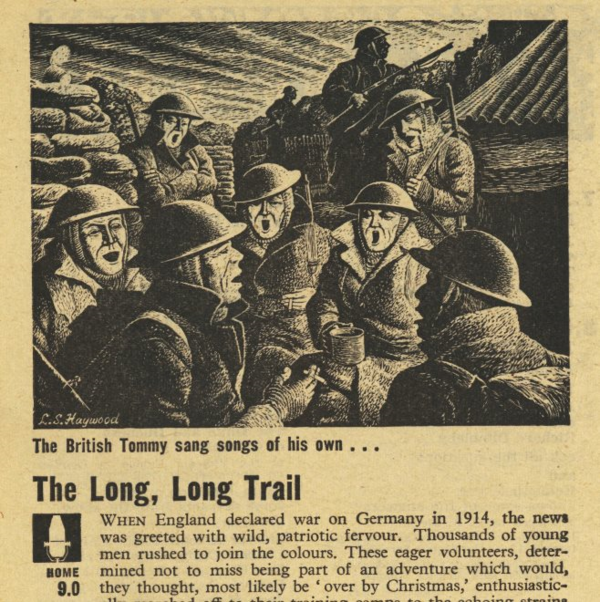 This combination of the absurd, the poignant and the tragic has no doubt also been key to the long-running success of stage adaptation Oh What a Lovely War!

The British Library recording of the original programme is accompanied on BBC iPlayer by an Archive on 4 retrospective narrated by long-time Chilton collaborator Roy Hudd, with contributions from Penny, Mary and David Chilton, and radio historian Professor Hugh Chignell.

Listen to Archive on 4 restrospective on The Long, Long Trail by Amber Barnfather & Roy Hudd

The Charles Chilton Collection (C1186) documenting the producer’s recorded work from 1941 to 2004 can be explored by onsite British Library users through the Listening & Viewing Service.