Below the lines in the ice: the sonic world of icebergs

No exhibition about the Arctic would be complete without some reference to icebergs. It just wouldn’t be right. During the planning of the British Library’s current exhibition, Lines in the Ice: seeking the Northwest Passage, icebergs, or more specifically, the sounds of icebergs, cropped up in a number of meetings and so the hunt for these sounds began.

A common misconception would be that icebergs are silent, white giants, moving noiselessly through the freezing waters of the polar seas. In fact, this couldn’t be further from the truth. Though at the opposite end of the world, crew members of Sir Ernest Shackleton’s Imperial Trans-Antarctic Expedition (1914-1917) commented on the sheer variety of sounds heard in the presence of the Rampart Berg:

“Close to the berg the pressure makes all sorts of quaint noises. We heard tapping as from a hammer, grunts, groans and squeaks, electric trams running, birds singing, kettles boiling noisily, and an occasional swish as a large piece of ice, released from pressure, suddenly jumped or turned over.”

Frank Worsley, Captain of the Endurance (excerpt from 'South' by Sir Ernest Shackleton)

With our focus firmly on the Arctic, the work of Irish composer Dr Karen Power, who, in 2013, spent time in the Arctic as part of the Arctic Circle Residency programme, came to the forefront. Wanting to explore and document the sounds of the ice, Power armed herself with a weaponry of drills and hydrophones in order to explore this mysterious world.

“Despite the silence, there is a tremendous pressure in the atmosphere. I wanted to get inside what I thought might be the cause of this pressure – the ice reshaping, melting - so I drilled some holes in some icebergs, at first on the shore and then floating in the middle of the water, and I was introduced to the most amazing sonic world”.

“First above the ice, then inside the ice, and finally at different degrees below the ice, I managed to drop hydrophones down as far as 20 metres below the surface to hear the icebergs cracking and resonating on the sea floor. What I found down there was truly, truly extraordinary.” 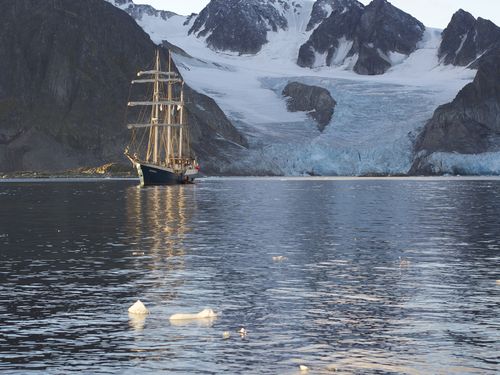 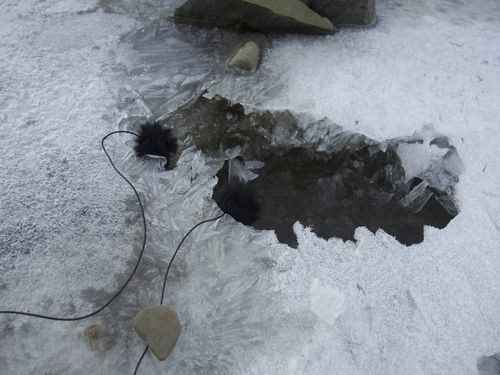 The field recordings collected during the residency open a fascinating acoustic window onto the usually hidden world of Arctic ice. Pops, cracks, creaks, groans, bangs and taps are just some of the sounds encountered during this incredible journey beneath the surface of the Arctic Ocean, a few of which are featured here:

Extreme iceberg close up with moaning

With room for only one recording from the collection in the exhibition however, the decision was made to include this wonderful example, which ranges from high-pitched tinkling to low, drawn-out groans.

Pops and smashes from icebergs at waters edge

On her return from the residency, Power created a short documentary, Can you Hear the Arctic?, in an attempt to express how the Arctic has affected her past and present practice, but also what compositional work might lie ahead of her as she draws on the life-changing experiences of spending time in one of the most beautiful and extreme regions of the world.

“I thought I was going there to record above and below the ice, and that’s what I did. What I didn’t think about was all of the other ways that these spaces, the silence, the vistas, people and the places would affect me and leave their imprint on my work.”

“I left there with the most amazing sound recordings but also a change in the way I think about time and space and sound.” 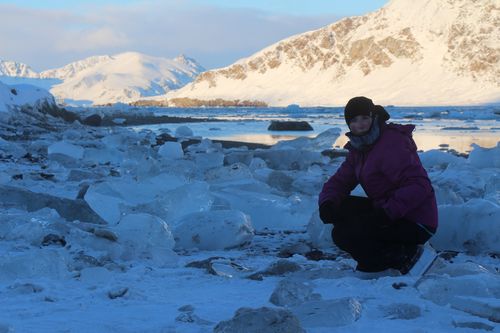 A versatile, enthusiastic and well-received Irish composer, improviser, educator and curator Karen seeks to stimulate, engage and interact with audiences. Her work utilizes two primary sources; acoustic instruments and everyday sounds, spaces and soundscapes. Karen’s output is diverse - both in its approach and delivery - and her primary aim is to capture and translate the essence of an idea through any artistic means necessary. For example, recent projects have been presented as orchestral works, sonic installations, radio art, collaborations between sound and dance, image and experimental film, free improvisations and musical happenings.

Some exciting current and upcoming projects include; Gorging Limpet, which is a collaborative project between sound and experimental film, The Arctic Circle Residency, hearSpace (2014) - an exploration into the world of Radio with a new interactive radio art composition, a large-scale collaborative commission for Canadian-based Quatour Bozzini and a DAAD Artist-in-Berlin Award for 2015/16 residency. Her latest album, Is it raining while you listen, features compositions and field-recording based work.

Events, Save our Sounds, Soundscapes, Travel