A guest post by John Park, Editor of Fringe Report.

The first volume of Fringe Report, covering the years 2002-2003, is now available exclusively for consultation by readers at the British Library.

Fringe Report was a website based in London which reviewed fringe theatre, arts, independent and arthouse film, dance, performance, poetry, music - anything that fell off the edge of the mainstream - though it often covered that too. There were no rigid lines.

It published two or three items a week all year round, was an accredited reviewer to Internet Movie Database and did in-depth interviews, features, gossip, and reports on parties.

Over the coming years, the whole content of Fringe Report 2002-2012 is being put into book form and donated to the British Library as a historical archive, a snapshot of the off-mainstream arts at the start of the twenty-first century.

The next volume, currently in preparation, will cover all the Fringe Report Awards - there are 250 of them - from 2003 to 2012, with the award certificates reproduced in colour.  It is due for presentation in spring 2015. 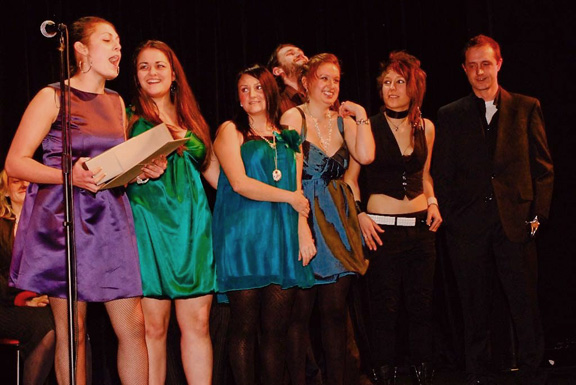 Fringe Report started in July 2002 and ran until 2012. It covered 50 shows each year and reviewed at the London Film Festival, the Dublin and Brighton Fringe Festivals, with reports over the years from other locations including Camden, Bath, Newbury, Reading and Montreal.

It had permanent writers in London, New York, Dublin, Denver, Edinburgh, Dallas, North-east England, St Petersburg and Hawaii; with up to 12,000 regular readers spread across the globe.  Most of them were in mainland Europe, England, Canada, United States, Republic of Ireland, Wales, Northern Ireland and Scotland, with others in the Middle East, across Asia, in Vietnam, China and Australia.

There was a monthly newsletter in English and Spanish as a briefing and gossip loop to PRs, actors, producers, directors, composers, performers, the public, theatregoers, arts enthusiasts, venue managers, promoters, impresarios, journalists, and other industry and showbiz professionals.

Each year there were 25 awards - the Fringe Report Awards - announced in January and presented on any day mid-February that wasn't Valentine's Day.

The first volume of Fringe Report, covering its first two years 2002-2003, was delivered to the Library on 18 December 2014, where it is now uniquely available.  It contains 478 pages of reviews of over 250 shows, plus interviews and articles.  A feature of the book - and of forthcoming volumes - is a comprehensive index of over 4,000 entries including shows, venues, companies and people.  Fringe Report always where possible contained full credits for the shows and events it reviewed or reported, and the index includes the names of 3,000 people involved.

When the whole archive is complete it will comprise 12 books including all published and previously unpublished material, 750 photographs, audio soundtracks of award acceptance speeches (including Sir Arnold Wesker, John Antrobus, Kevin Sampson, Dr Elliot Grove, Kiki Kendrick, Abi Titmuss, Holly Penfield) and film of the several years of the awards.