Chacking to hear some Cornish dialects?

This month we've uploaded linguistic descriptions of conversations about local speech in Warleggan, Penzance, Mawla, St Feock and Truro. Together they constitute the set of BBC Voices Recordings made by BBC Radio Cornwall. The descriptions list the participants' responses to a set of prompt words and, in the case of Mawla, St Feock and Truro, also include a detailed description of the phonology and grammar of the speakers. A distinctive feature of established accents in Cornwall is rhoticity - that is speakers pronounce the <r> sound after a vowel in words like better, hard and first. This was at one time a feature of speech throughout the UK and indeed, until relatively recently was still widely heard across much of southern England. Nowadays it is most commonly associated with speech in the West Country and South West, a small area of Lancashire and most of Scotland and Northern Ireland. All five recordings here include speakers who are rhotic to varying degrees, although it is immediately apparent that the speakers in Warleggan, Penzance, Mawla and St Feock are much more consistent in their use of 'postvocalic R' than their younger counterparts in Truro, whose speech is predominantly non-rhotic except for a few isolated examples.

You can also hear several examples of the distinctive Cornish dialect pronoun system:

The form of the pronoun contrasts here with Standard English conventions for subject and object position - a phenomenon known as pronoun exchange - and some speakers also use an archaic form en, a reflex of the Old English masculine object pronoun hine. Individual speakers vary in terms of the frequency with which they use these dialectal grammatical features, and they are absent from the younger contributors from Truro. 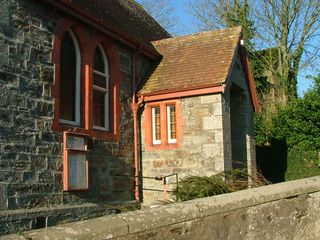 It would be wrong, though, to conclude that the younger speakers in Truro sound in any way less Cornish. They use a number of local vowel sounds and occasional 'broader' dialectal pronunciations, such as idn [= isn't] and, like the speakers in the other recordings, offer several local dialect words like teasy [= 'moody'], and enting down [= 'raining heavily']. One young Truro hairdresser even supplies the historic Cornish term old Tuss (a local form of address) and admits she often says she's chacking for a piss [= 'dying to go to the toilet']. No lesser authority than the English Dialect Dictionary (1898-1905) records the verb chack, including a citation from Cornwall in 1808: I'm chacking with hunger.

This evidence of older and present-day Cornish dialect continuity and change is one of a number of unique audio collections held at the British Library. Through the Library's Save Our Sounds programme, you can help us preserve the nation's sound heritage.

Posted by Jonnie Robinson at 10:05 AM

Accents & dialects, Contemporary Britain, Save our Sounds, Voices of the UK