Current Edison Fellow David Gleeson writes about his work for Decca in London and the major film studios of Hollywood.

Returning to the UK after nearly twenty years abroad, several life events drew me to the British Library’s Oral History of Recorded Sound, which in turn led to applying for an Edison Fellowship.

Straight out of London University in 1984, I went to work as a research assistant for Decca, Belsize Road, where a veteran team of analogue recording pioneers was trying to come to terms with a new generation of digital recording pioneers – just as mono engineers had had to come to terms with stereo engineers in the 1950s – and not without conflict. Although I didn’t appreciate it at the time, I was fortunate to be present amongst those who’d invented methods that have remained unchanged through all of the upheaval of the digital era. I then went to work at Abbey Road where the ‘Decca Tree’ and other orchestral recording techniques were an unquestioned given. In 1991, I moved to California and co-ran the scoring stage at Skywalker Sound, where Decca Trees were as much a natural part of the environment as the rolling hills of Lucas Valley Road.

By 2000, I’d set up a post-production facility with Ren Klyce and Malcolm Fife, in which David Fincher’s Fight Club was the first project. On our next Fincher film, Panic Room, I co-produced the score for Howard Shore. Howard subsequently invited me to join his Lord of the Rings films, directed by Peter Jackson. It was a watershed moment in film scoring, just as multitrack digital tape recorders had reached their peak and digital audio workstations were taking over. Much of the preparation work for the extended Fellowship of the Ring and The Two Towers involved building a team and workflow which allowed orchestral multitrack recordings to be edited during the session, deploying technology that had yet to be tested in such a pressured environment. Needless to say, at the front end of all this new-fangled technology stood a Decca Tree. 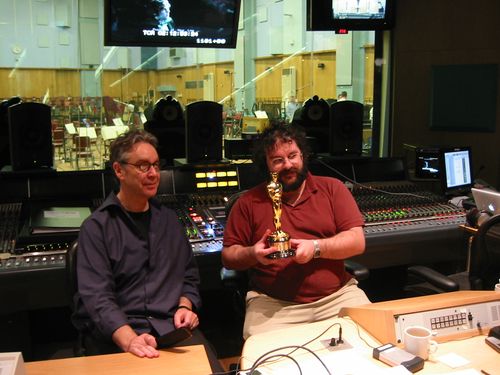 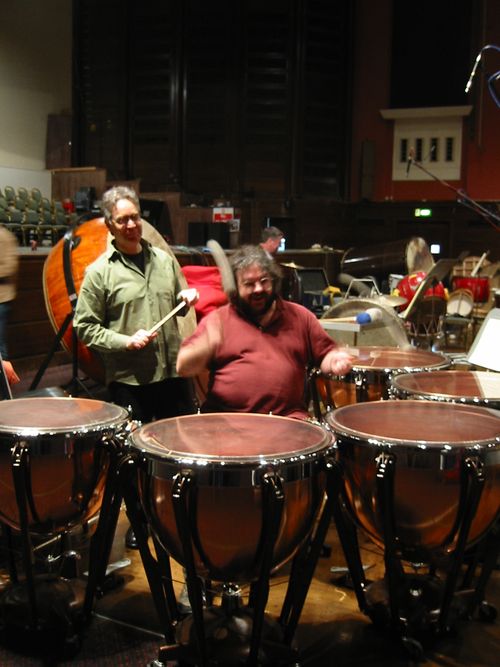 Watford Town Hall – Peter Jackson taking a break with the timps during LPO recordings for The Two Towers, Howard Shore standing by with a spare mallet (photo by David Gleeson 2002)

After two years of production work, I took a step back from the bustle which had involved spending much of the year away from home, 20-hour workdays, frequent all-nighters, and endless travel. A writing sabbatical ultimately led to recording work at The Banff Centre. It was there, high up in the Canadian Rockies, that I met up-and-coming recording engineers who wanted to learn all there was to know about Decca Trees and scoring sessions alike. Fortunately for them, John Dunkerely, former chief engineer at Decca, was there as visiting faculty to impart much wisdom on the subject.

A point of discussion with John was that we’d recently lost many of the luminaries of what had become known as the Golden Age of Decca. Between 2004 and 2012, engineers, Kenneth Wilkinson, Roy Wallace, Cyril Windebank, Jimmy Lock, and Jack Law had all died, as well as producers, Erik Smith, Ray Minshull, Andrew Raeburn, Christopher Raeburn and Peter Andry.

Unlike conductors and a few of the more successful producers whose lives are pored over in great detail with resulting hagiographies, precious little had been documented on the lives of the engineers. Fortunately for posterity, and the rest of us, the OHRS had recorded interviews with Decca’s Tony Griffiths and Arthur Haddy. Since starting the Edison Fellowship, interviews have been conducted with Michael Gray, Jimmy Brown, and Tony Hawkins.

The Edison Fellowships are designed to encourage scholarship devoted to the history of recordings of classical music and music in performance through creating the conditions for concentrated use of the Library's collections of recordings.

Posted by Jonathan Summers at 2:14 PM