Oh I do like to be beside the seaside!

Over the next three months, the British Library, the National Trust and the National Trust for Scotland are encouraging everyone to get themselves down to the seaside and record their favourite coastal sounds. This could be anything from gentle waves lapping onto a sandy Devon beach to the amusement arcades of Brighton Pier.

These sonic memories will be shared through the Sounds of our Shores channel, created specifically for this project by audioBoom, as well as an interactive coastal soundmap hosted by the library.

One of the outcomes of the project, once the initial crowdsourcing element has come to a close on the 21st September, will be a musical work composed by musician and producer Martyn Ware. Founder member of both Heaven 17 and the Human League, Martyn describes what the sounds of the British coastline mean to him:

It’s a very important thing to me that sound is an under-appreciated sense that we have. When we go anywhere; when we go to the cinema, when we’re walking around a park, when we’re walking across a bridge, over a river - we tend to think that everything we do is visual, or the way we remember things is visual. In fact that is not the case. I discovered this when we were doing a 3D sound project on the Millennium Bridge in London - every time we switched the soundscape on people used to take more photographs.

This relates to the coast as well because I think that the sounds of the coast are probably more important than how the coast looks when you go to the sea. The sea is the sea and it’s very nice to look at. It’s meditative, the sound of the sea is an amazing thing, as are the sounds of people being happy. Generally when people are by water they tend to be happier because it is a relaxing experience. But think for a moment about the sounds of the seaside: of course you’ve got the sea, but also the sounds of people laughing, children playing, people singing, trams if it were Blackpool.  Certainly seabirds too, various kinds depending on how remote your location is, but definitely seagulls all the time. And you have people swimming, people possibly splashing in the water. There are various ways that these sounds are amplified according to where you are, according to whether you’re on an open stretch, on a spit, or if it is very, very quiet. The sea would hit ,something like the Dorset Coast which can be very shingly for instance, and when the sea hits that, it makes an entirely different sound to when it hits a shallow piece of beach like at Cleethorpes where I used to go as a boy. 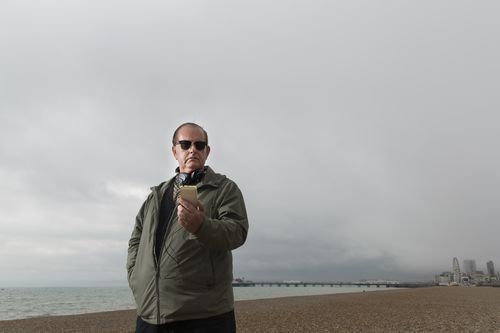 The sound that I love most about the the sea is that roar, the roar when it’s stormy.  It’s beautiful.  I also love the tiny little splashes when the sea hits rocks or rockpools.  I like recording tiny little sounds, maybe of crabs walking around on rocks, but I like the giant sounds too of course, the giant waves.  But really what the seaside symbolises to me is relaxation, enjoyment and a sense of well -being really.  I’ve always been very fond of being close to the sea.

Sounds of our Shores runs from 21st June to 21st September 2015. Full details on how to take part can be found here.

Sounds of our Shores, Soundscapes